Kadai paneer recipe – Indian cottage cheese (paneer) cooked in a delicious and super flavorful onion tomato gravy with homemade kadai masala & bell peppers. This dish gets its name karahi or kadhai paneer since it is cooked in a special Indian wok called kadai which is one of the most basic kitchen essentials of Indian Cuisine. It is eaten with roti, naan, tandoori roti, plain steamed basmati rice or jeera rice.

Kadai paneer is a simple yet amazingly flavorful paneer recipe made by cooking paneer and bell peppers with fresh ground spices known as kadai masala. It is called as kadai paneer since it’s cooked in a kadai, an Indian wok.

Recipe 1 – My kadai paneer gravy turns out to be much more flavorful & delicious than what is served in most restaurant. It’s a winner always and is so simple to make. This kadai paneer gravy is good when you are home for a meal. It goes well with butter naan, roti & even with jeera rice or plain basmati rice.

Recipe 2 – quick kadhai paneer semi dry curry which has lesser curry or sauce. I often make this for the school and the office lunch box along with jeera rice & simple vegetable salad. This also goes well inside roti or wraps as a filling. You can find this recipe towards the end of this post.

1.Prepare these and set aside.

2. To make kadai masala, add the following ingredients to a blender jar:

3. Pulse all of them to make a coarse or fine powder to suit your taste. Kadai masala is usually ground to a coarse powder. In this recipe, it gets cooked well in the gravy, so it does not come in the mouth even if it is made to a slightly coarse powder. Set this aside.

4. Heat a pan with half tablespoon oil on a high flame. Saute 1 heaped cup of cubed onions along with 6 to 7 split cashews until they turn transparent or lightly golden.

5. Add 1 cup chopped tomatoes and continue to saute on a medium heat until tomatoes turn mushy and soft. If needed add little salt or cover and cook to fasten the cooking.

7. Add the cooled onion tomatoes to a mixer jar.

8. Blend it to smooth paste without adding water.

9. Add another half tablespoon of oil to the pan and heat up on a high flame. To get the restaurant style smoky flavor, use the same pan used for sauteing onion tomatoes earlier. Add capsicum and onions, saute on a high flame just until half cooked (must remain crunchy). Constantly toss to prevent burning.

11. Add 1 tablespoon oil and heat it on a medium flame. Saute ginger & garlic paste until the raw smell goes.

12. Add the ground spices – kadai masala and saute it well on a medium to low heat. We have not roasted the spices earlier so we need to do it well here until it turns aromatic & the raw flavor goes away.

15. Next saute well for 2 mins again. Since we have sauteed onions and tomatoes well in the earlier steps, we don’t need to cook the masala a lot.

16. Add ¾ cup water and mix well. Bring this to a boil. If needed pour another ¼ cup water.

17. Cook until the gravy turns thick and flavorful. Make sure the gravy doesn’t look runny or watery. After boiling it well, you will see traces of oil on top of the gravy. Next towards the end add ¾ teaspoon crushed kasuri methi.

Allow kadai paneer to rest for at least 15 mins for the paneer to absorb flavors. You can also smoke the curry if you like following my dal makhani post. 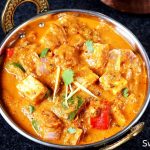 Kadai paneer is a restaurant style delicious spicy paneer recipe made with fresh ground kadai masala, paneer, onions, tomatoes & bell peppers. It's full of flavors and one of the best paneer gravy recipes you can make at home. It is best served with plain basmati rice, flavored rice, roti, naan or any flatbread.
Pin Recipe Print Recipe

Video for recipe 2 – kadai paneer dry. You can find the written instructions for this recipe as well in this post. 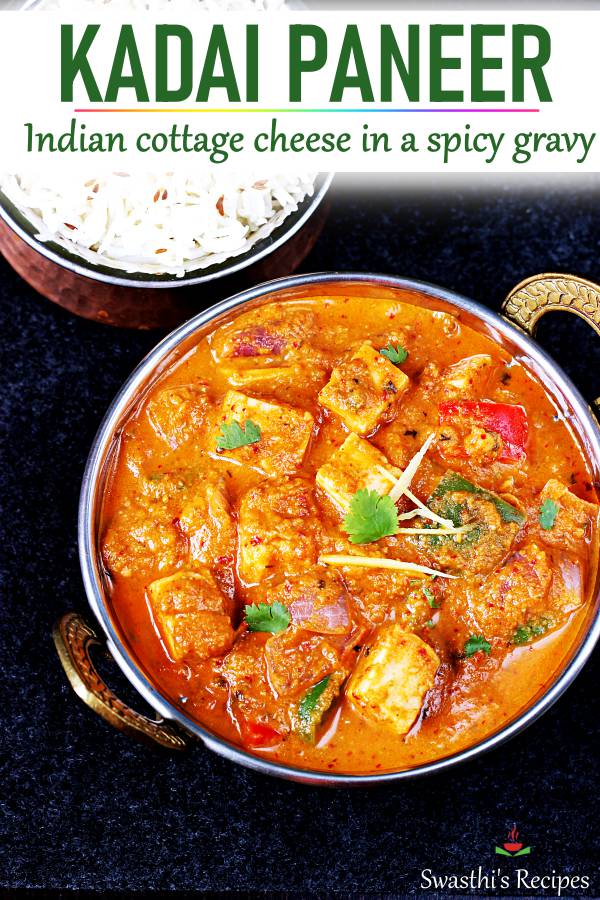