Egg kurma recipe – kurma or korma is a saucy dish originated in central Asia and is made of spices, meat, vegetables, yogurt, seeds or nut paste. This simple egg kurma is roughly adapted from few South Indian recipes that I have already shared.

It pairs very well with any biryani, rice pulao, paratha or even with chapati. When ever I have guests for a meal, I prefer to make this to go with any kind of chicken biryani or veg biryani or even pulao since it is quick if we have boiled eggs ready. 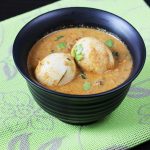 to grind (or use half cup fresh curd)

How to make egg kurma

If you do not have saunf powder, you can roast some saunf seeds and blend them with coconut. If using only curd or yogurt, please ensure you use fresh one that is not sour. Tomatoes and yogurt both may make the gravy too sour. So use ripe red tomatoes that aren’t sour. If needed add more spice powders.

1. Boil the eggs, remove the shells and make few incisions randomly and set aside.

Blend together coconut & poppy seeds or cashews with little water to a smooth paste.

2. Heat oil in a pan, add cinnamon, star anise, cloves, jeera or shahi jeera and bay leaf. You can also add crushed saunf or fennel seeds. I used it along with the other spice powders later. Do not use too many spices if you are making this to go with a biryani, stick on to the quantity mentioned in the recipe.

4. When the onions turn golden, fry ginger garlic paste till the raw smell goes off.

6. Add garam masala, chili powder and saunf if you have not added at step 2 or 5.

7. Mix and fry until the raw smell of chili powder is gone.

9. Fry until it begins to smell good or it begins to leave the sides of the pan. This step takes about 3 to 5 minutes depending on how thin or thick your paste is.

10. Add pudina. I did not have pudina so did not use. But i suggest using for a good flavor. Fry for about 2 to 3 minutes.

11. Pour water just enough to make a gravy and cook covered on a low flame until slightly thick. Stir in between.

Add the boiled eggs. You can also saute the eggs in oil at step 2 and add them to the pan now. Fried eggs do lend a nice flavor to the korma.

12. After a while the kurma thickens and oil begins to float lightly. Add coriander and switch off.

Egg kurma ready to serve with biryani, parotta and pulav.