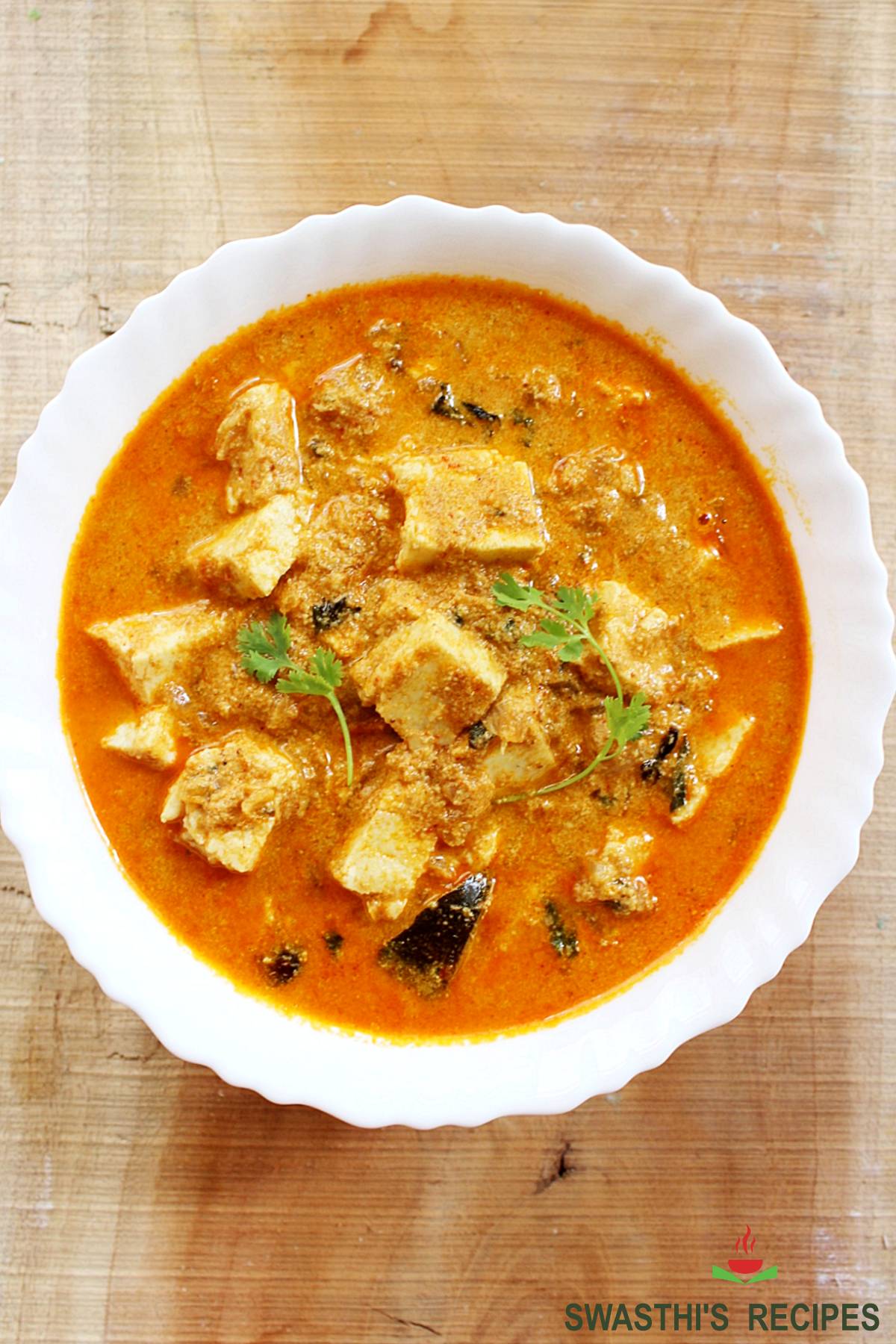 Paneer korma that’s delicious, simple to make and requires only pantry staples. For a hearty Indian vegetarian meal, serve this paneer kurma with plain basmati rice, flavored rice like Ghee rice, Jeera rice, and pulao or with flatbreads like Butter Naan, roti or chapati. Unlike most other Paneer Recipes, this paneer korma isn’t loaded with calories as it doesn’t use ingredients like butter, ghee or cream. Make this delicious and fragrant paneer kurma on the stovetop or in the instant pot following my easy one pot recipe.

If you are new to Indian cuisine you may be wondering

What is Paneer Korma?

Paneer korma is an Indian dish where Paneer, aka Indian cheese is simmered in a fragrant and delicious kurma gravy. Korma also known as kurma is a South Asian curried dish where meat or vegetables are cooked in a curry base made with nuts, seeds, yogurt, coconut and spices.

In Paneer korma recipe, vegetables & meat is replaced with paneer. This resulting dish is simply delicious with soft paneer in an aromatic and rich gravy.

In India, every region and even every household has a different recipe to make korma. In North Indian cuisine it is known as korma and is mostly made with onions, seeds, nuts and yogurt as the base, while the South Indian version uses coconut or coconut milk with a unique combination of spices and herbs.

Paneer korma is popular on the restaurant menus and you find many kinds like shahi paneer korma, Hyderabadi paneer korma, Chettinad paneer kurma, Nawabi korma etc. Each of these have their own special flavors.

Every version has a thickener used, some recipes use nuts like almonds or cashews. While some use seeds like melon seeds or poppy seeds. A few recipes also use fried onions, yogurt, seeds, nuts and coconut. So every version has a different taste and flavor.

In this post I have shared a generic recipe from my mom. It has delicious flavors from the whole and ground spices, herbs like mint. I have used poppy seeds and coconut here. You can also substitute them with nuts like almonds and cashews or with yogurt and nuts or with just coconut milk.

This dish is light and not heavy as the white shahi korma you get in the North Indian restaurants. On special occasions I have also made this with 1/3 cup of split cashews to make cashew paneer korma. If you love cashew curry you will love that version as well.

1. Skip this step if you intend to use coconut milk. Add 12 cashew nuts (24 split) or 2 tablespoons poppy seeds to a grinder jar. Make a fine powder. Then add ¼ cup coconut and grind to a smooth paste with 6 to 8 tablespoons water. Ensure this paste is very smooth and do not have grits in it. Keep this aside.

2. Heat a pan with 2 tablespoons oil on a medium heat. When the oil becomes slightly hot, add whole spices

4. Add ¾ cup chopped tomatoes and ¼ teaspoon turmeric. Saute till the tomatoes turn mushy. If they are too dry, splash little water and cook covered on a low heat.

7. On a medium flame saute for about three to four minutes stirring occasionally. It must begin to release a nice aroma of coconut and poppy seeds.

8. Pour 1 and ¼ cup water. If using coconut milk you will need only ¾ cup water. Mix well and bring it to a boil. If required, add little more water to adjust the consistency.

9. Cook on a medium flame till the korma gravy turns thick and specks of oil are visible on top. At this stage, taste test and add more salt and garam masala if required. If you want to add cashews, add 1/3 cup ghee fried cashews and let simmer for a while.

10. Add panner to the korma and turn off the stove. Give a good mix and keep the paneer korma covered.

What is korma sauce made of?

Korma sauce is made of onions, yogurt, nuts, seeds and whole spices. Some versions even use fried onions or coconut and herbs like mint leaves.

What is the difference between korma and curry?

Korma is essentially a gravy dish, In other words it is a dish with sauce and most often ingredients like yogurt, seeds, nuts, spices, herbs and sometimes coconut are used. A curry can be a dry dish or a saucy dish and is usually made in South Asian style. It may or may not have the ingredients used in korma.

Korma tastes nutty, flavorsome and has a well-balanced taste of slight sweet, spicy and tart flavors. It is heavy on flavors but light on heat quotient. 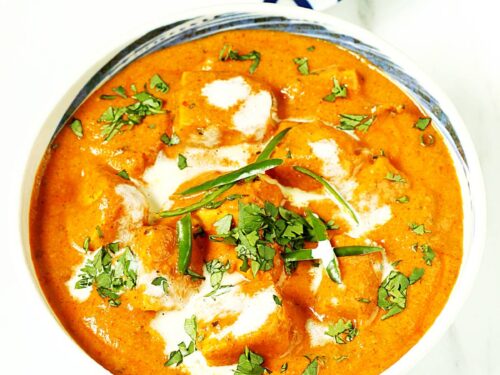 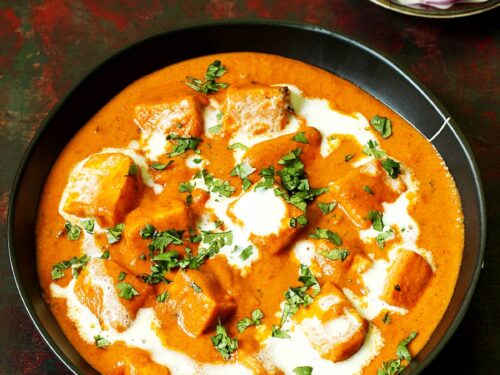 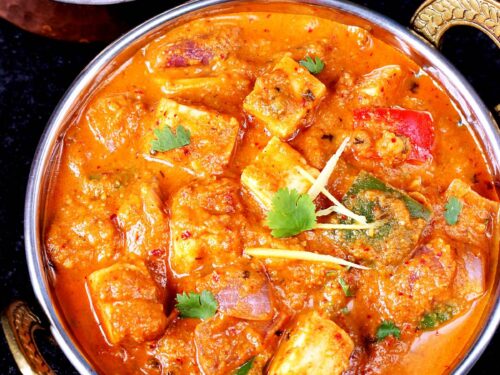 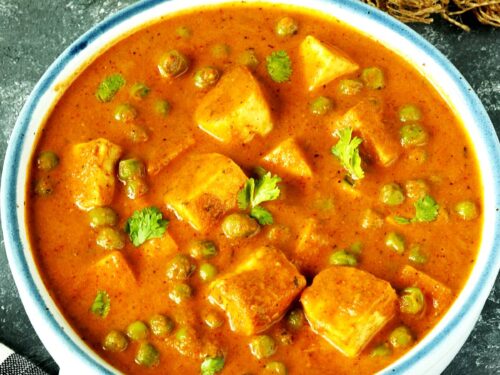 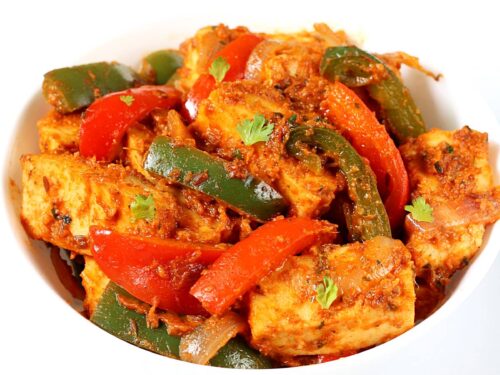 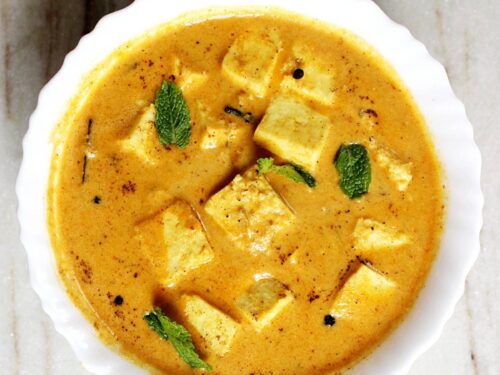 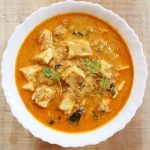 Indian cottage cheese known cooked in a onion tomato based gravy along with poppy seeds and coconut paste. Mildly spiced gravy that can be served with rice based dishes or Indian breads like roti , naan and phulka
Pin Recipe Print Recipe
Prevent your screen from going dark

To Grind or use ½ to ¾ cup thick coconut milk

Can I use Amul cheese slices instead of Paneer? If not is there any other recipe I can try with processed cheese slices?

No, it won’t work.
You can use it to make cheese dosa, cheese sandwich, cheese omelette, garlic cheese toast, bread pizza, regular pizza, omelette cheese sandwich. I have all these recipes on the blog. Please use the search bar on the menu.

As a college student who loves home made food and budgeting I appreciate the substitutes you provide and how amazing the dishes turn out. I made chicken for the first time a day ago and it turned out like it was made by a mother and it was delectable.

Thank you so much Ritesh
So glad to know the recipes are helping you.
Thanks again!

This sounds so good! I have poppy seeds and coconut milk instead of fresh coconut. Should I just blend them together?

Hi Janna,
Sorry I was travelling so couldn’t reply you in time. If using coconut milk, skip the poppy seeds too.

I actually just tried Paneer Korma for the first time and I LOVED it. I’m not sure if it was like yours or not. I had the following ingredients: Paneer Cheese, Indian Soffrito, Cashew Cream, Korma Spice? Red and Green Bell Peppers and some red onion, plus Cayenne to taste, brown rice, and Cilantro. The trouble is this was delivered and I have since dropped the meal service. Do you have a recipe that would be close to that? Or should I just add peppers, and cilantro and use brown rice? Or is yours maybe sweeter?
Terri

Hi Terri,
Take a look at this Kadai Paneer. It may work out well for the ingredients you have. Hope this helps

Can I make it without poppy seeds?

Hi Swasthi
I love all your recipes – they are so easy to cook and taste delicious. Thank you so much for offering such a fantastic service.
I only have black poppy seed. Can I use them instead of the white poppy seeds?
The colour of the curry will slightly be darker, I assume. Will the taste differ as well?
What kind /brand of blender do you use to blend the spices into fine powder?
Thank you very much in advance.
Best regards Steffi

Hi Steffi,
You are welcome. Thanks a lot for trying the recipes. I haven’t tasted the black poppy seeds any time. Usually the white one are sweetish, creamy with a milky taste. Not sure if black seeds taste the same. If you are familiar with the taste of the black ones then you will be able to decide whether they go well or not. For this recipe you can also use about 12 cashewnuts. Regarding the blender – I use a Indian mixer grinder. These come with stainless steel jars and blade which are powerful enough to make smooth purees and paste. I use tUltra blender and preeti mixer grinder. The ultra jar lids are bit delicate and are prone to breakage if not handled carefully but it does a great job. Hope this helps.

Thank you so much! It helped me a lot. I will have a look at the blenders you recommended later. Maybe they are available in Europe as well.
The dish was delicious even with the black poppy seeds (I bought them already powdered). Next time I am in an Asian store I will buy the white seeds and cook the dish again to find out if there is a difference. Happy Easter!

Happy Easter Steffi!
Thanks for the comment. Yes I guess the blenders are available in Europe as well.
🙂

Thanks for your recipe

Thank you for information…

very yummy recipe.sir but i want to ask u if we don’t hve coconut than can we use coconut powder ready.

Thanks Palak,
Yes you can use, but fresh coconut tastes best.

practically i observed that your recipe is delicious

reall it tests so nice.

This recipe is a keeper swasthi. I make it every week we r addicted to this. Thanks

Thank you Ninu. im glad you liked it

Swasthi, you are an amazing cook. we made this so many times, it turns out too good. but coul not comment here. I must thank you for so many yummy recipes.

Thanks for your time Siri.
🙂

Mom’s recipes are always a super hit! My amma makes almost a similar korma with chicken, will def try your version.