Rajma recipe – Delicious & flavorful curry made with red kidney beans aka rajma. In Indian cuisine, a lot of legumes are eaten regularly as they are the main source of protein & fiber. Lentils, chickpeas, peas, black eyed peas and red kidney beans are some of them used to make curries. Rajma chawal is a favorite combo in many North Indian households where rajma masala is served with chawal (rice). Some onion & lemon wedges on the side is all you need to enjoy this delicious dish.

Chole, dal makhani, chana masala & rajma masala are some of the popular curries from North Indian Cuisine. These are always included on the restaurant menus or even made in most households regularly.

WHAT IS RAJMA?
ABOUT THIS RECIPE
STEP BY STEP RAJMA RECIPE
TIPS TO MAKE THE BEST
FAQs ON RAJMA RECIPE

Rajma is the Indian name for red kidney beans. These are soaked, cooked & then simmered with onions, tomatoes & spices to make the dish, Rajma masala. It is also just referred as rajma. It is the quintessential North Indian dish made on weekends, special occasions, weddings etc.

Rajma are fat free and have many benefits since they are high in fiber, folate and magnesium. High fiber promotes digestive tract health, folate & magnesium makes them a heart healthy food. Considering these benefits red kidney beans are widely eaten in India.

My recipe to make rajma masala is based on the restaurant style where pureed onions & tomatoes are used to give the best taste & texture to the dish. The flavors are so good that you won’t need anything on the side other than chawal.

There are numerous ways to make rajma. But the most common method is the Punjabi way where the kidney beans are soaked overnight, pressure cooked until tender and then simmered with the bhuna masala.

But in many standard restaurants, rajma is made with pureed onions and tomatoes to give a better texture & taste to the dish. Though the method of making is the same as Punjabi rajma, using onions & tomatoes in pureed form makes the entire dish taste so good.

This rajma recipe will give you a thick, delicious & flavorful dish that you can serve either with plain basmati rice, Jeera rice, roti or naan.

1. Add ¾ cup rajma to a large bowl and rinse them well a few times in lot of water. Pour fresh water and soak for at least 8 hours. Soaking helps to soft cook them well.

While you soak them , do not cover the pot completely. There must be a circulation of air to the soaked beans especially during hot summer days otherwise the beans turn sticky. Rinse them thoroughly before cooking.

2. Pressure cooker: If cooking directly in the pressure cooker, then pour 2 cups of water along with the rajma and pressure cook for 3 to 4 whistles on a medium flame depending on your cooker.

This time I placed the rajma bowl inside the cooker and pressure cooked for 6 whistles, this is because I didn’t cook them directly in the cooker. Rajma has to be soft cooked yet hold their shape.

To cook in Instant pot – Pour only ¾ cups water to the rajma bowl. More water makes mine mushy. Pressure cook on high pressure for 18 to 20 mins. Wait for the pressure to release naturally. (refer notes in the recipe card)

Check if rajma is cooked by pressing it with your thumb and fore finger. It should get mashed easily. You can also bite and check it should not be al dente. If they are al dente then cook them again for 2 more whistles.

3. While the beans pressure cook, prepare the onions and tomatoes. To make the onion paste, add 1 large onion (1¼ cups chopped) to 2 cups of boiling water. Boil them for 3 to 4 mins. Drain them, cool and make a fine paste in a blender. Set this aside to a bowl.

4. In the same jar, I pureed 2 medium tomatoes (about 1 cup). The puree has to be smooth. [Tip: I also added 2 tbsps of soft cooked rajma so I get a smooth & thick flavorful curry. This is the secret to my flavorful rajma masala. If you don’t like you may skip it.]

5. Heat 2 to 3 tablespoons ghee or oil in a pan. Add 1 bay leaf and half teaspoon cumin seeds (both are optional). When the cumin sizzles, turn the flame low and add 1½ teaspoon ginger garlic paste. Saute until a nice aroma comes out.

6. Then add the onion paste.

7. Saute until it turns golden.

9. Add all the spice powders and salt mentioned below.

10. Saute the masala until it turns thick and leaves the sides of the pan. The onion tomato masala should be well cooked and not have any raw smell.

11. Then add the soft cooked rajma along with the stock (rajma cooked water).

12. I added more water (¾ cup at this stage) to bring it to a consistency. Totally I used 2.75 cups water for the entire recipe. This my vary depending on the other ingredients.

14. After 15 to 16 mins, this will be the consistency of rajma masala. They must be tender and soft otherwise pour more water and cook for a little longer.

Sprinkle ¾ teaspoon kasuri methi if using and mix well. Sprinkle coriander leaves. You can also stir in 2 tbsps cream. I did not use cream. Taste test at this stage and add more salt if needed.

Tips to make the best rajma

How to make rajma masala thick?

Slow cooking for long time to some extent makes the curry thick. I know a lot of people mash the rajma lightly once they are cooked in the masala. But I do not do it as my kids don’t like the mashed rajma. Here are my tips which will help you to get a thick gravy

2. Can I use chopped onions and tomatoes in this recipe? Yes you can use them chopped but your rajma won’t be thick as shown in the pictures.

3. Why are onions boiled here? Onions are boiled first to remove the raw flavor so they cook faster in the pan.

4. How to soak rajma faster? Rinse ¾ to 1 cup rajma well and keep aside. Bring 6 cups of water to a rolling boil in a pot. Add the rinsed rajma and boil for 2 to 3 mins. Cover and leave them for an hour. Discard the soaked water to get rid of the tannins, phytic acid & oligosaccharides.

Rinse them well. Your kidney beans are well soaked and ready to cook.

5. Can I use canned kidney beans? Yes. For this recipe you can use about 2 to 2 ¼ cups of canned kidney beans. Drain the liquid from the can and rinse the beans well before adding to the onion tomato masala. Most canned beans have sodium added to it as a preservative. So it is good to discard the liquid in the can.

How to make rajma in instant pot?

Yes you can make it in instant pot the same way as mentioned for the stove top version. Pressure cook on high pressure with the timer set to 35 mins. Use only 2 cups water.

When the pressure releases naturally, open the lid and add kasuri methi and cook for a few more minutes until it turns thick. If you want it thicker then blend 2 tablespoons of rajma in a blender with 4 tbsps water to a smooth paste. Add it to the simmering curry.

How to make one pot Rajma?

Making one pot rajma is a bit tricky and sometimes may be a failure if the beans are an old stock as they don’t get cooked. So it is like experimenting.

In this post I have shared 2 methods of making rajma. First one is to cook the rajma first and then separately make the gravy. Then add the precooked beans to the gravy. Second method is to make the onion tomato masala and then add the uncooked rajma. Pressure cook everything together until rajma turns soft.

To follow this method, Measure the soaked rajma in cups. We will have to add an equal amount of water to soft cook them in the gravy.

1. Heat ghee or oil in a pot, saute cumin until they begin to splutter. Add ginger garlic or ginger paste and saute until the raw smell goes off.

2. Add chopped onions or onion paste. If you like a smooth gravy, then use onion paste. You can also make a paste of onion and tomatoes together, but i prefer separately as this tastes better.

3. Saute until the paste or onions turn golden.

4. Add tomato puree or chopped tomatoes. Cook until the raw smell of tomatoes is gone.

6. Saute and cook until the mixture begins to leave the sides or the raw smell of the onion and tomato is gone.

7. Add rajma. I have added uncooked ones here. Add same amount of water equal to the soaked rajma. For half cup rajma, you will get about 1 and 1/3 cup after soaking them for 8 hours. So I added the same amount of water to get the right consistency. You can also add little more water, if you like a thinner gravy.

8. Add ginger slices and 1 slit green chili. Cover and pressure cook on a medium flame for 1 whistle. Lower the flame and cook for 5 more whistles. It took around 35 mins for me to get the last 5 whistles. However the timing may vary depending on the size or the base of your cooker.

9. When the pressure releases completely, open the lid. This is the consistency I got to see.

This method has always yielded me soft cooked beans, but beans that is of a very old stock don’t get cooked faster, in that case you can pressure cook first for 2 to 3 whistles and add to the gravy.

or after the last step check if they are under cooked, then add more water and continue to pressure cook for another 2 whistles on a medium flame.
Serve with roti, plain rice, jeera rice, onion & lemon wedges . 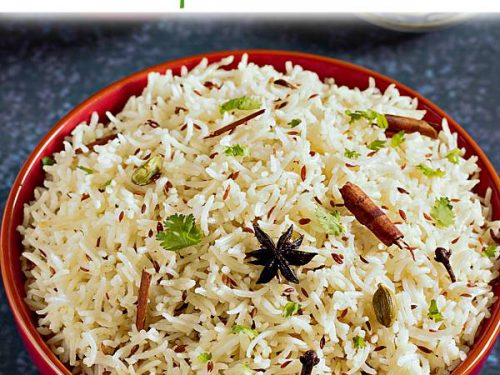 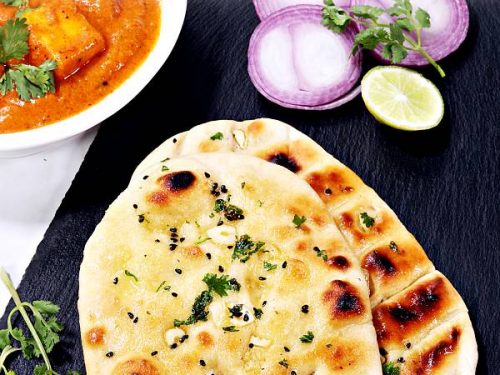 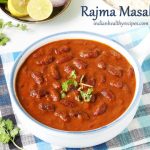 For a restaurant style rajma, use onion paste, tomato puree and then 2 to 3 tbsp cream. You can also skip pureeing the onions and tomatoes. Just grate them and use but the texture is different. If beans are not soft cooked, you can add more water and cook for 2 more whistles. This may happen if you are using a very old stock of the beans or they are not soaked well. Instant pot : I pour only ¾ cup water to cook my rajma. More water can make them mushy. 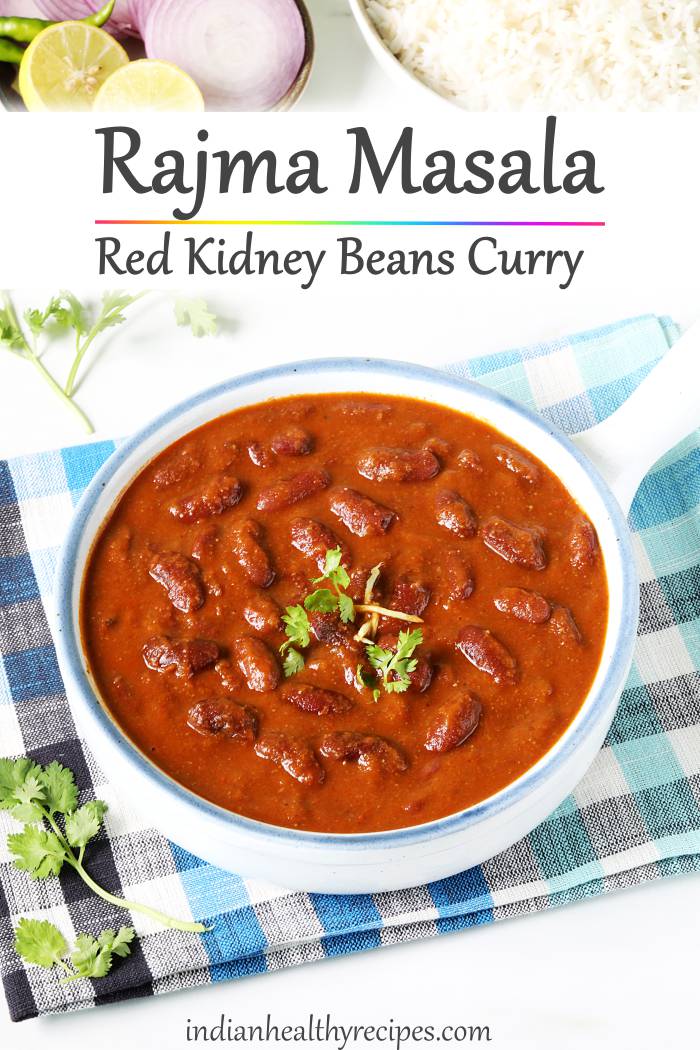