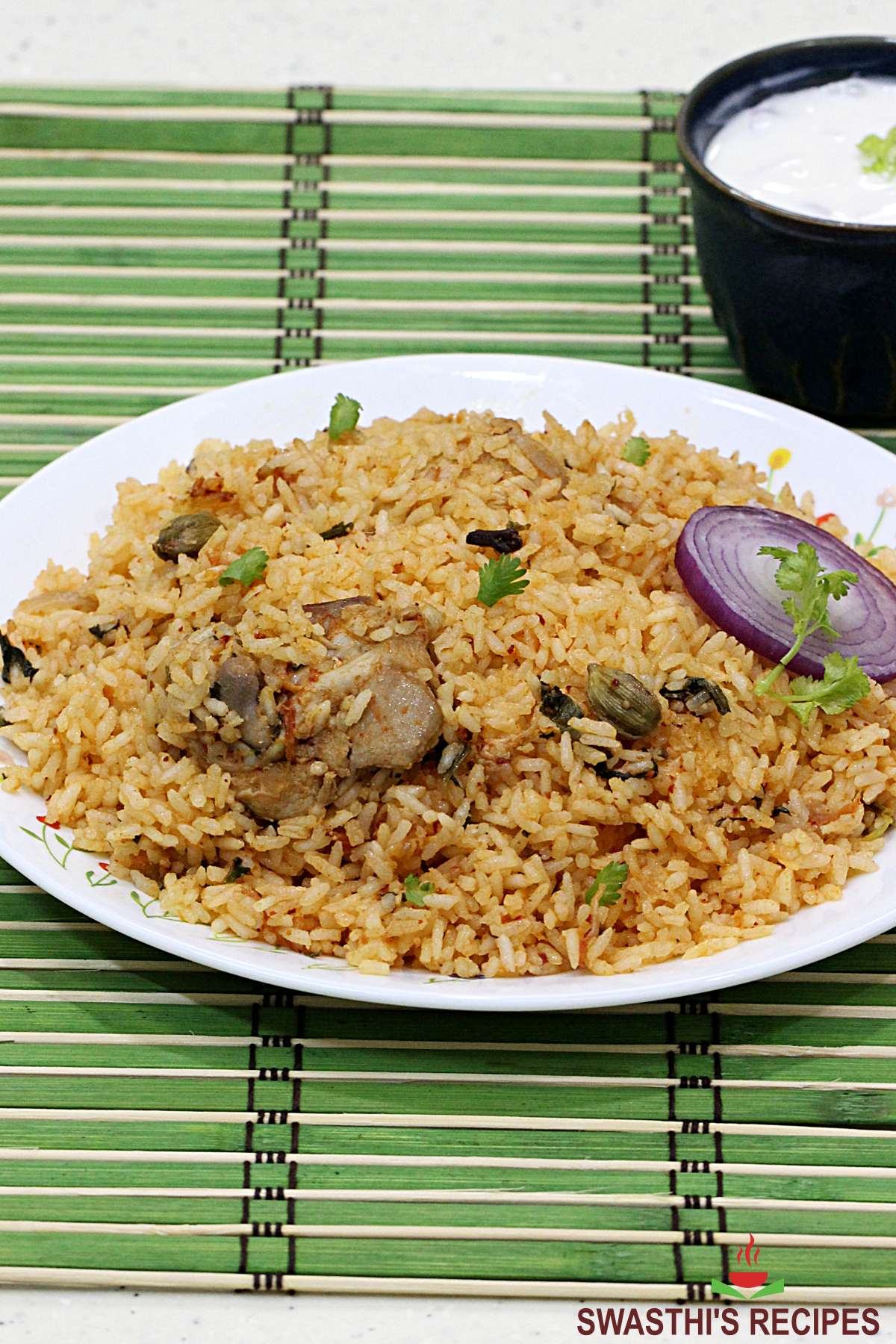 Make Ambur Star Biryani at home with this easy and detailed recipe. Often the dishes we grew up eating offer unique warmth and comfort. For us, one such dish would be the Biryani, the classic evergreen fare of Indians. We unanimously gorge on this dish especially during celebratory times. And down in South India especially in Tamil Nadu, Ambur Biryani would be the one that a lot of people love the most. A biryani is a delightful treat with tons of flavors!

Nonetheless, we are impartial towards all varieties of biryani like the Hyderabadi Biryani, Thalassery Biryani and Chettinad Biryani, etc., since they come with their own unique taste and texture.

Ambur biryani is a delightful one-pot meal with succulent pieces of meat cooked to perfection along with the aromatic jeera samba rice, mint leaves, coriander leaves and whole spices. The flavor and taste of meat is more dominant in Ambur biryani than the other ones due to the fewer spices used.

The mildly flavored rice is light on the stomach since it is not ghee-laden with many spices like the other biryani varieties. While making this mixed rice biryani, do not use green chilies and ghee.

Instead, rely on dried red chilies which is the key here. The spiciness of the Ambur biryani comes from the usage of fresh, dried chili paste, which makes all the difference in flavor and taste.

Ambur, a small town in the Vellore district of Tamil Nadu, famous for its lip-smacking biryani and its leather manufacturing units, can be considered as the place of origin of the Star Ambur Briyani.

History traces it further to the kitchen of the Nawabs of Arcot, who had connections with the Hyderabadi Nizams. Arcot, which is near to Ambur, was a central commercial hub of trade during the 18th century, and it is for this reason the Ambur rice was known as Arcot rice initially.

The biryani became famous when Hussain Baig, who cooked in the Mughal kitchen, started selling his biryani from home. Later a Hotel was established so that the commoner also got to taste the royal food. The restaurant now has outlets in all the major cities and has gained much adulation all over India. They even have one in Singapore, the country where I live.

Ambur Biryani Vs Other varieties of Biryani

Rice: Ambur biriyani is made with short-grain rice, known as jeeraga samba rice. Samba refers to the samba season (August to January) during which the rice is grown. With an ovular shape, it is one-third the size of the basmati rice and therefore called jeera rice since its physical appearance is small, like cumin or jeera.

The rice is much harder than the other varieties, giving it a less fluffy texture. On top of that, this aromatic rice has distinct flavor-absorbing properties.

For this reason, the rice retains its texture and does not thicken into lumps. Moreover, samba rice absorbs the flavor of the masala quite well in contrast to biryani rice which gives out a strong flavor.

The samba rice is ideal for making this biriyani as it can absorb a large quantity of water without turning mushy.

Spice powder: The preparation of Ambur biriyani comes without any spice powder and does not use Garam Masala. Instead, the recipe uses only a few whole spices such as cardamom, cloves, and cinnamon.

Mode of cooking: The original Ambur biriyani is made on a wood fire and slow-cooked by using the dum technique.

Try making this Ambur biriyani and enjoy the meal with your dear ones. The taste and flavor of this biriyani are very close to what I got to taste from their outlet.

To make ambur star mutton biryani, water is used to cook the meat. But in this recipe I have made it without using water as chicken itself will ooze out lot of moisture while cooking. This recipe has been adapted from a Tamil channel. All the measurements given below are mine. They work out well and comes close to the Ambur biriyani that I had eaten in Singapore. 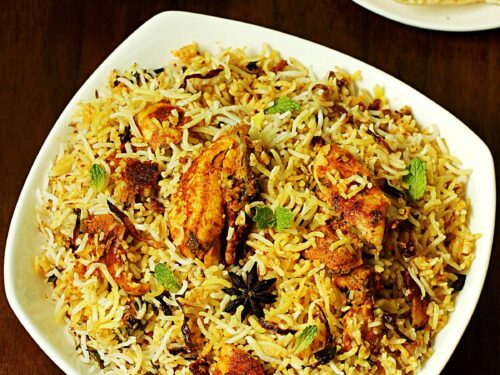 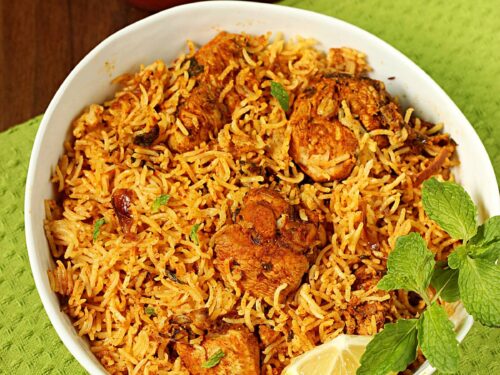 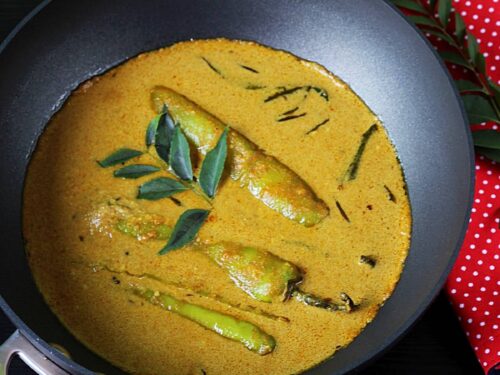 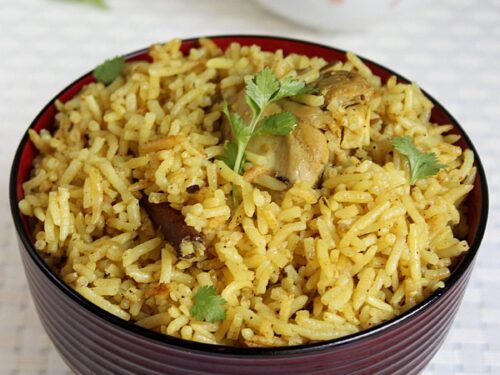 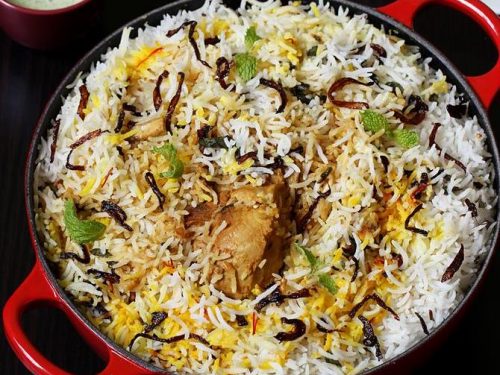 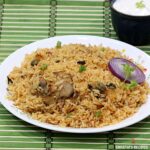 Made with chicken, sambar rice and whole spices, this Ambur biryani is the easiest you can make at home with this recipe.
Pin Recipe Print Recipe
Prevent your screen from going dark

This post on Ambur Biryani was first published in February 2017. Updated and republished in January 2022

Hi Swasthi,
What is the capacity of the pot you have cooked the biryani in? If I wanted to up the meat content to 700 gram for the same amount of rice how much more spice would be needed? Thanks

Hi Sonia,
I don’t suggest any changes to the recipe here. If you increase the quantity of chicken, there will be a lot of moisture in the pot and that may make the rice mushy. Since I have not tried it with more meat, I suggest you stick to the recipe. I think it is a 2.6 L kadai. Hope this helps

As usual excellent recipe. Can you please share the ambur mutton briyani recipe

Hi
You can use the same recipe to make with mutton

Welcome Moksha
Glad it turned out good. Thank you

Can I use basmati rice instead of jerraga samba?
Thank you

Hi Nilima
I haven’t tried it. Not sure how it works since the rice is cooked to 70% here. I have a lot of biryani recipes here using basmati. You may check.

Thank you Prameetha
Glad your family loves it!

Hi
First of all I’d like to thank you for the wonderful Chicken Korma recipe. It was absolutely scrumptious.
My one question for this recipe is , if one were to make this for 2 kg of chicken then would the spices need to be quadrupled? 40 peices of cardamom seems to be a tad over the top.
Thanks

Hi Anup,
You are welcome. Thanks for trying!. Yes even 40 cloves will be a lot. Just cut down cloves and cardamoms to 30. Hope this helps.

The video is useful, the instructions are not. Never mentioned anywhere about adding salt to the boiling water, about when to add mint,curd and lemon juice. Adding how much onion twice the times etc. The recipe itself is good and mouthwatering picture, but please fix the written instructions. Thanks for sharing the recipe.

Welcome J.
Thanks a lot for the mention. I have fixed it. Sorry for the inconvenience.

After coming to Bangalore, I have seen so many outlets of Ambur Biriyani. .Thanks for sharing the recipe.