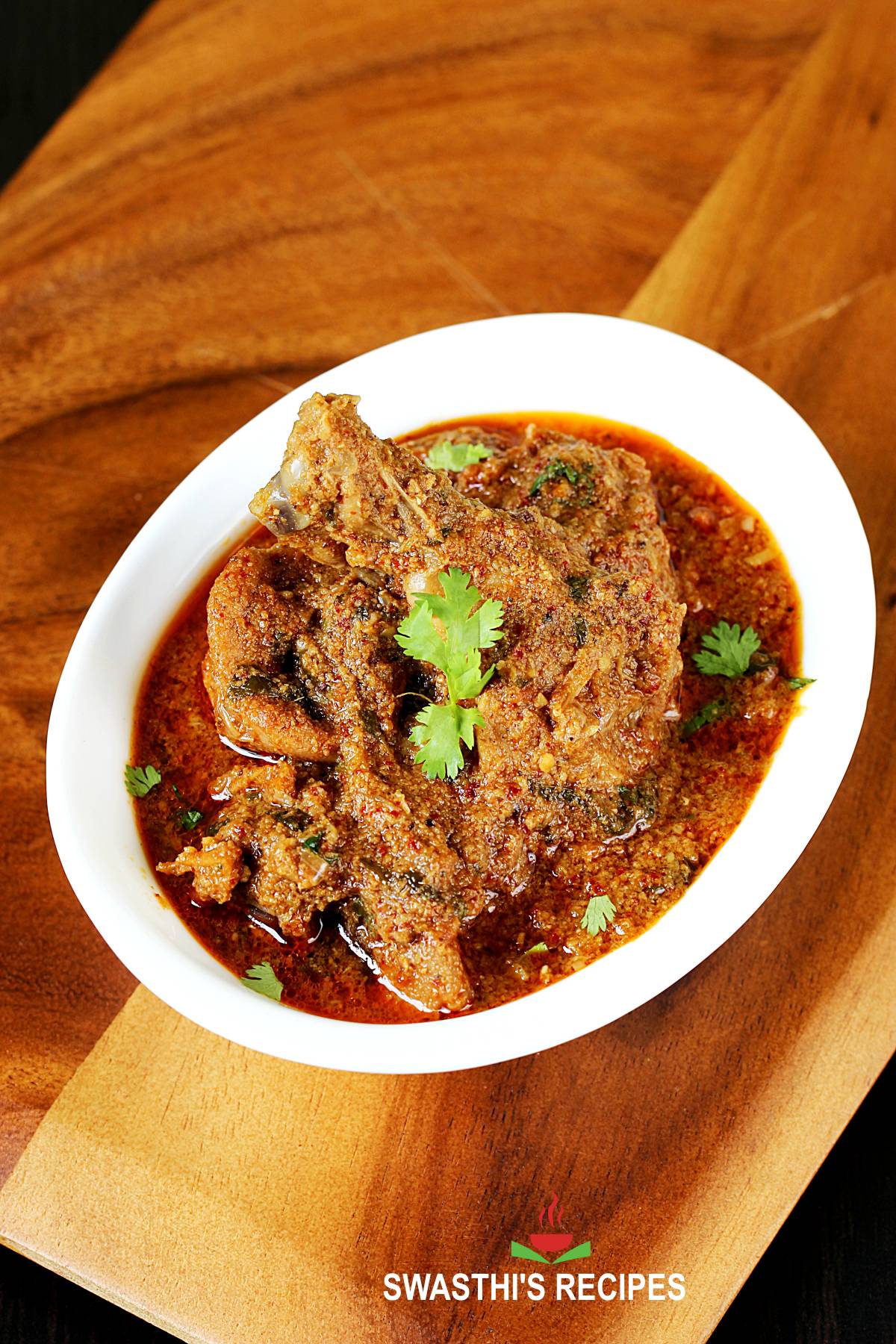 Chicken Kolhapuri is a popular spicy, rich, delicious and super flavorsome dish of curried chicken from the Kolhapuri Cuisine. Chicken is marinated in fresh ground spices & coconut and later simmered to perfection until the flavors are absorbed. Kolhapuri chicken is best served over Steamed Rice or with Bhakri, Roti, Naan or Parathas. Kachumber, Vegetable Salad and Chaas make for great accompaniments.

Kolhapur, a city from the Southern Maharashtra in India, is well known and famous for a lot of things. While the Mahalakshmi Temple stands on top, the culinary delicacies representing the most flavorful & spiciest foods are equally well-known. The city is also popularly known for the Kusti (wrestling) & handicrafts.

Misal Pav, Pandhara Rassa and Tambda Rassa are some of the dishes from this cuisine. Chicken kolhapuri along with Veg Kolhapuri , is mostly seen on the restaurant menus especially in the South Indian and Western Indian states.

If you are new to Kolhapuri Cuisine and want to give a try, this chicken kolhapuri is the right one. Kolhapuri cuisine is actually not for the faint-hearted as the spice levels are too high and a lot of people may not be able to enjoy it.

My chicken kolhapuri is a toned down version (w.r.t heat) but is super flavorful and tastes delicious. This actually tastes better than what you get in standard Indian restaurants.

Lavangi Mirchi, a kind of small and hot red chilies are the star of Kolhapuri tongue-searing dishes. The combination of various spices, dried coconut, sesame, white poppy seeds & the lavangi chillies form the base of this dish.

Now that these chilies are not easily available in other parts of the world, I simply use Kashmiri Chilies which makes for a toned down version. Also because white poppy seeds are not available in the Country I live, I choose to skip them. You may however just add a few cashews if you want.

If you are assuming dried coconut to be the same as desiccated coconut, that’s not. Dried coconut is known as copra, is simply dehydrated coconut with all of the milk and fats intact but it in a dehydrated form. So this kind of coconut actually elevates the flavor of your dish.

Here are the spices for you to identify. For the quantities, please scroll down to the recipe card below and gather all the ingredients required for the recipe.

These are coconut, white sesame seeds and cumin seeds.

Add coconut, cumin seeds, white sesame seeds and white poppy seeds. Roast them until all the ingredients turn to deep golden. Do not over roast as the spices will taste bitter. Transfer these to a plate and cool. Later add them to a spice grinder and grind to a fine powder.

While the spices cool, add 1 tablespoon oil to a deep pan or pot & heat it. Add sliced onions & saute them on a medium heat until golden.

Saute without burning until the raw smell from ginger and garlic is almost gone. Cool these as well.

Transfer onion and ginger garlic to the spice powder and grind again to a fine powder. It turns out slightly oily and lumpy but make sure ginger garlic is ground well to paste.

Add this kolhapuri masala to the chicken and mix well to marinate.

Set this aside for at least 15 mins to overnight (in the refrigerator).

Pour 2 tablespoons oil to the same pan and add deseeded and chopped tomatoes. Sprinkle salt and cook until the tomatoes turn soft.

Transfer marinated chicken and saute well for 3 to 5 mins on a medium heat.

Add salt to the chicken. Pour hot water just enough to partially cover the chicken. The amount of water to use depends on the kind of chicken, you may start with half cup water. Add more if required later.

Regulate the flame to low flame and cook chicken kolhapuri covered until chicken is fully cooked, fork tender. While you cook, if you thick the curry is too thick add more hot water. If it looks too runny, cook uncovered on a slightly high flame.

The internal temperature of the chicken should reach 164 F or 74 C. To test simply try to pull out the chicken with a fork or knife. If will be tender and fall off the bone easily. Chicken that’s still hard most times in undercooked, if so cook a little longer.

You will also see traces of oil over the curry when it is done. Taste test and add more salt if you want. 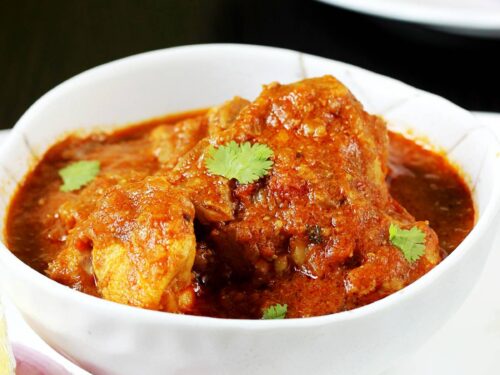 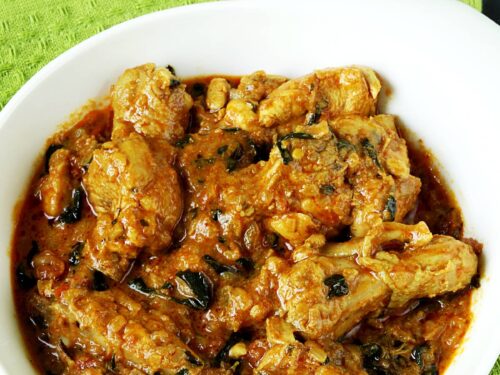 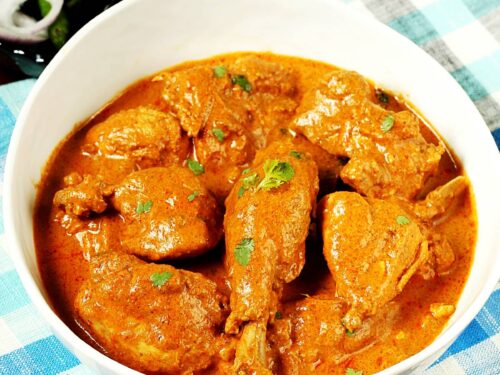 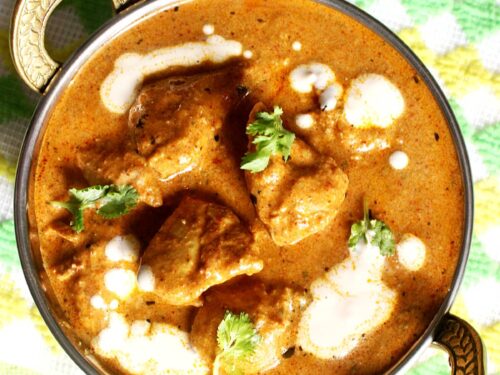 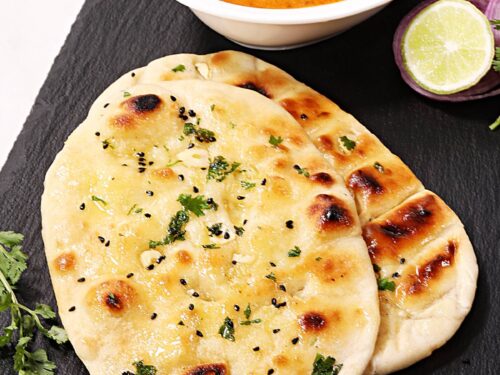 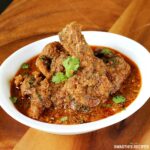 Chicken Kolhapuri is a super flavorful, delicious and spicy dish of curried chicken, simmered in plenty of aromatic spices, coconut and herbs. Serve it over rice or with roti, chapati, naan or flavored rice.
Pin Recipe Print Recipe
Prevent your screen from going dark

How to Make Chicken Kolhapuri

This is one of the best chicken curries I have ever eaten, let alone cooked. I used home grown/dried small, hot red chilies as a substitute for the hard to source lavangi to replicate the authentic heat level and puréed the tomatoes to save on time and make a smoother gravy. It turned out rich, bold, flavorful, and very spicy, just the way I prefer.
It was difficult to grind the masala due to the oils released from the coconut and sesame seeds, making the mixture clump up, so I had to add some water, but it was well worth the effort.

Hi Bobby,
Thanks for trying and sharing the outcome. Glad it turned out good.

I tried this recipe on my husbands birthday and my family loved it. Thanks a ton for this superb recipe. You made my day

So Happy to know Cecilia!
Thank you!

I tried this last week and enjoyed it so much I’m cooking it again tomorrow for some friends. Great recipe!!

Glad to know Phil
Thank you

No chicken curry is born yet to beat this recipe of chicken kolhapuri..perfect masala n the flavour it gives to the curry is uff! …its that yummy!tastie.. thank you for this mouth watering recipe..
dear all,please try it if you have not yet!

Thank you so much!

Hi Swasthi.. sounds like a yummy recipe. Gonna try it soon.. 😊 Could you please tell me the name of the masala that’s created from the roasted spice blend? Is it the Goda / Kala Maharashtrian masala by any chance?
Coz if I make this, then won’t have to purchase any of those masalas.. thank you..

Hi Salomi,
For this recipe, you don’t need any goda or kala masala. You just have to use the masala I have given

Hope you both enjoy it!

Dear Swasthi,
just finished the dish (i was able to save 1 serving for tomorrow :D). We absolutely loved your recipe! The Masala is the perfect base and turns out great when mixed with the tomatoes and water!
I added a carrot sliced in stripes and previously shortly sauted.
Roasted almonds and mint-yoghurt fit great as siders 🙂
Thanks again for your great recipe and keep up the good Work!:-)
Greetings from Germany
Patrick

Hi,
Welcome! That’s a lovely spread! Glad it turned out great. Thank you so much for leaving a comment.
🙂

Tried the Kolhapuri Chicken. Turned out Awesome. Thank you very much.

You are welcome
Glad to know

When ever i have to make anything be it veg or non veg i first see your blog… U are always on top of my list…while trying ur recipe i have full trust that dish will turn out good surely without any worries…
Tried chicken kolhapuri today… and i will give it six stars out of five.. ☺️ ☺️
A small request.. Please make non veg kofte… ??
Regards & wishes

Hello Tabassum
Thank you so much for the trust. Glad to know! Yes I will try to share.
🙂

Hi,
I love the way you explain how to cook. The ingredients are simple, yet they turn out to be very tasty. I tried a lot of recipes from you and amazingly, they all turned out to be excellent. I loved this recipe and the most that I and my friends liked was butter chicken. We are all great fans of butter chicken, but the one you explained was simply succulent. I search for a recipe first on your website and if I don’t find any, I look for another option.
I suggest that you create a PDF document with all your recipes. But please, it should be free 🙂

Hi Sinu
Thank you so much! Glad to know!
Hope you enjoy more recipes from here

Hi,
I tried it today, Sunday, for lunch. Turned out awesome. I tried a lot of your recipe ,they did turn out good but this one is took good.

Thank you so much Asha
Glad your kolhapuri chicken turned out good.
🙂

I get it what your trying to say there but you forget to mention what do we do with the spice paste we made ???

Hi Selena,
I did not forget. I said to add the sauteed onions and ginger garlic to the spice powder and blend again. Then I say to marinate the chicken with this paste. Please watch the video if you are not clear.

Can’t wait to make this. Could I substitute paneer for the chicken?

Hi Julie
Yes you can use paneer. Skip the marination part and just add the spice powder to the pan after cooking the tomatoes. When the gravy is ready just add the paneer towards the end. Hope you will like it.

Hello mam . Warm greetings , This is ganesh 25 yrs old bachelor from tamilnadu . I m a big fan of your dishes and have tried a few . and the taste is amazing . I found a dish long back and have cooked few times , but now i forgot the recipe name and procedure , can you help me out mam . Things i remember is . I think starting itself we have to put chicken in oil and saute for 5 mins i used cumin powder in the dish and sprinkled cardamom powder at last. please help me to find out the dish and i would be obliged if you send the link directly to my mail. ganestm @gmail.com

Hi Ganesh,
Thanks for trying the recipes. I am not sure which recipe that is. Just tell me whether it is a starter, curry or dry chicken. This helps me to find out.

Thank u sswathi love your recipes

Lovely chicken gravy…a twist to the usual chicken curry… Tq so much.

Hi Tasneem,
Yes you can use

Hi Swasthi, I cook occasionally but when I tried your Kolhapuri Chicken it turned out awesome! The only thing I tried different was I blended the tomatoes instead of chopping them. Will make this many more times.

Hi Abhishek
So glad to know it turned out good. Thanks for the comment.

Swasthi I have tried your kolhapuri chicken recipe twice and it came out super awesome. You have explained each step very well. Now I get request from my family to make this preparation every second day ?. Thanks a lot for sharing. Will soon try your other recipes too.

Welcome Shweta
So glad to know you liked it. Thanks for sharing the outcome.