Naan Recipe – Learn to make delicious, soft & fluffy butter naans at home with the help of this detailed step by step photo & video post. Naan is a leavened flatbread mostly cooked in a tandoor (clay oven). It is one of the most ordered flatbreads in Indian restaurants & is eaten with a curry or dal (lentils). Restaurants typically serve many kinds of naans with varying thickness, textures & flavors.

Paratha, poori, bhatura, roti, naan, parotta, tandoori roti, kulcha are some of the most commonly made flatbreads from Indian cuisine.

Originally naan dough was leavened using a bread starter that was left from the previous batches. This is very much similar to the way we make yogurt using a starter.

If you order naan in Indian restaurants you may not find the texture & flavor to be the same in every place. Each place may have their own recipe to make these. So they taste and smell so different.

Each one of us have a different acquired taste for naans and would love them with a particular texture and flavor. Choose the one that suits your taste:

1. Without Yeast – Most often I make naans following this method for 2 reasons. First one – no wait time. Make the dough, then straight away roll and toast them. They are done under 30 mins.

Second reason is to avoid yeast. This method uses baking powder and baking soda (optional) as a substitute to yeast.

2. With yeast – If you love yeast breads, their flavor & the fluffy chewy texture then this will be the one you will love. But it does take time to make naan with yeast as the dough needs to rise.

I have a little kid who loves the soft & chewy texture of the yeast naan so sometimes I make this way. This dough is great to make naanizza with some curry & cheese toppings.

3. Begin to knead the dough adding more warm milk as needed. You may need more water or milk than mentioned in the recipe.

4. Knead the dough very well until soft & pliable. It must be soft & not sticky. (check video). Do not over knead as it will make tough naans.

5. Cover and rest for 30 mins to 1 hour. This is optional. I make them instantly after 10 mins. Divide the dough to 6 parts and make round balls tucking the edges inside.

6. Meanwhile chop 5 to 6 garlic cloves and ¼ cup coriander leaves. Melt 3 tablespoons butter and set aside all of these along with kalonji seeds (optional).

How to make naan

7. Flour the rolling area very lightly. Too much flour will toughen the naans. Place a dough ball and flatten it.

8. Roll or stretch the dough to a oval or a elongated shape. Sprinkle the toppings and then lightly roll it again. You can make all the naans. They will shrink and become smaller, just roll again while you cook them.

9. Heat a griddle or tawa. If the pan is not hot enough then the naan will not rise well. So ensure it is hot but not extremely hot. Gently remove the naan from the counter and place it on the hot griddle. Soon you will see bubbles on the naan. You can also cook them covered.

10. Hold the naan with a tong and filp it to the other side. After flipping you can cook them on the griddle or on direct gas flame as per your preference. Cook on the other side as well until completely cooked & slightly charred. Do not press down the naan with a spatula as it will make them dense.

11. Remove to a serving plate and then brush some butter.

Butter Naans are best served hot, straight out of the griddle. Serve them with any curry or dal.

Flour: Naan is always made with all-purpose flour (or maida). For health reasons please choose organic or atleast unbleached flour. You can substitute all-purpose flour with wheat flour but you will surely not get the kind of fluffy, soft and chewy texture in your naan.

I have made them with wheat flour several times and can just say they will no where be near to the real naan. However if you are health conscious and eat them often then you can use wheat flour.

Rolling Vs stretching dough: Naan is always hand stretched and not rolled with a rolling pin. Sometimes rolling toughens the dough and suppresses the bubbles making dense flatbreads.

Hand stretched naan have a lovely fluffy & light texture. So I usually make all the naans at one go and then toast them so they get time to rise on the counter.

Size & thickness: Naans are pretty much made in different shapes and thickness. For fluffy naan breads make them slightly thicker. Do not make them too thick unless you are going to use a good heat source otherwise they remain uncooked.

For Leavening (or use ¾ tsp instant yeast)

How to make naan 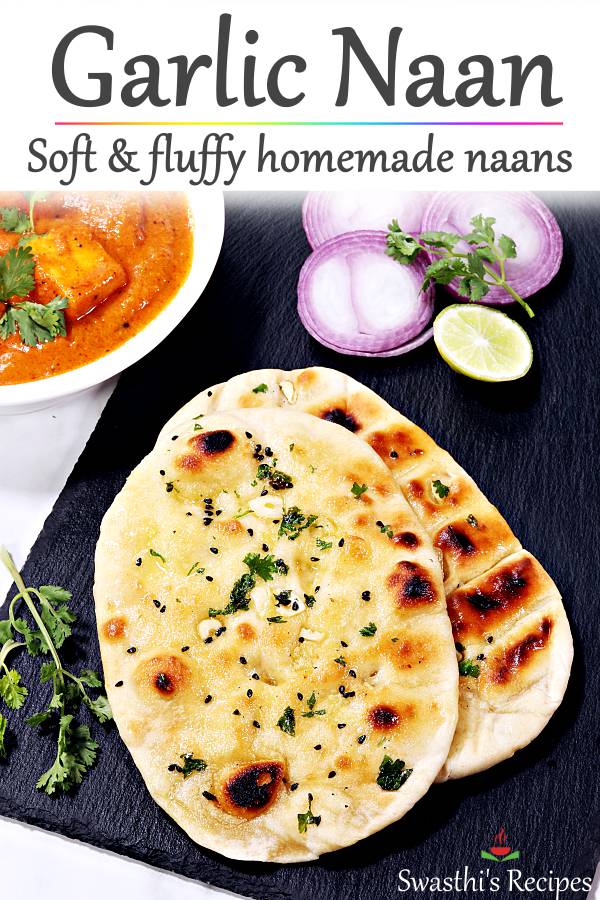 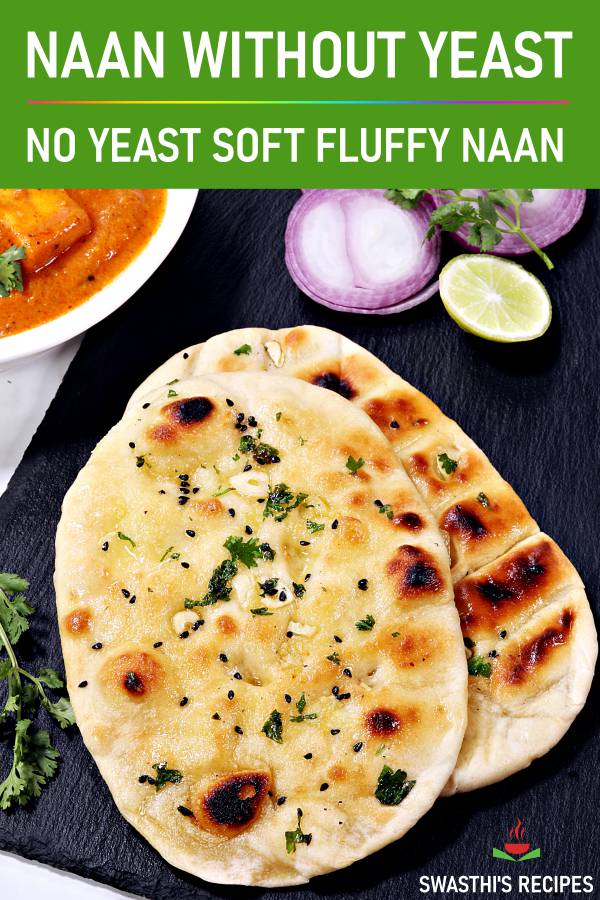