Muslim biryani recipe made in South Indian style – a generalized recipe that one can use to prepare a delicious, flavorful and simple meat biryani. This biryani is made during andhra and tamil muslim weddings and family get together. Fairly easy to make even for a crowd due to its simplicity.

You can also check these other recipes of pakki mutton biryani recipe and hyderabadi mutton dum biryani on the blog. The recipe shared in this post is good for beginners and for those who do not have much time to go through an elaborate process of making dum biryani.

To prepare this muslim biryani, I have used chicken, you can substitute it to make mutton or egg biryani too. This recipe is very different from the pakki dum biryani and hyderabadi chicken dum biryani that is from the Mughal cuisine.Though the ingredients that go towards the making these dishes are same, the taste is entirely different since the cooking methods are different.

1. Slice onions and chop tomatoes, set them aside separately. Soak rice in water for atleast 20 minutes.

2. Marinate chicken or mutton with little lemon juice or curd, salt and turmeric. Set this aside to tenderize. If your mutton is not tender you can use meat tenderizer or set aside for about 1 hour to overnight.

3. Add pepper corn, cinnamon stick, cloves, nutmeg, fennel seeds, stone flower and cardamoms to a blender and make a fine powder. Keep this aside in a plate.

How to make muslim biryani

6. When they begin to splutter, add the mint and coriander paste. Fry till the paste begins to smell nice. It takes around 2 to 3 minutes

7. Add tomatoes, salt and turmeric. Fry or cover and cook till the tomatoes turn fully mushy.

8. Add chicken or mutton and fry on low flame for 3 to 5 minutes.

9. Add masala powder from step 3, and red chili powder. Fry for about 3 minutes on a low flame without burning.

11. Cover and cook for about 5 minutes for the chicken. If using mutton cook till soft and tender, it doesn’t get cooked well with rice later. you can even pressure cook mutton for 1 to 2 whistles at this stage. The oil begins to separate and the gravy thickens. We do not want watery gravy.

12. Pour 3 ¼ cups water and add salt, we have already marinated the chicken with salt and used salt to cook tomatoes, so use less salt.

13. Bring the water to a rapid boil. While the water boils, drain off the rice to a colander. Make sure there is no water left in rice

14. Cook till the rice is almost cooked with very less water left and the rice must be 75 percent cooked. If you feel the rice is undercooked, sprinkle some hot water over the rice and stir. However you must not exceed using 3 ½ cups water on the whole.

15. Add kewra or rose water. Stir gently and cover the lid and put on dum for about 5 to 7 minutes.

16. For the dum process, if you have an induction stove, you could switch it to the minimum. If on gas stove, heat an old dosa tawa, place the biryani utensil on the tawa and dum it for about 5 to 7 minutes. Consider the time when the tawa becomes hot. Do not open for atleast 10 to 15 minutes after you switch off the stove. When still hot, fluff up the rice with a fork.You can even dum this in oven for about 15 to 25 minutes at 180 c preheated oven.

Muslim chicken biryani is served with onion raita or shorba. 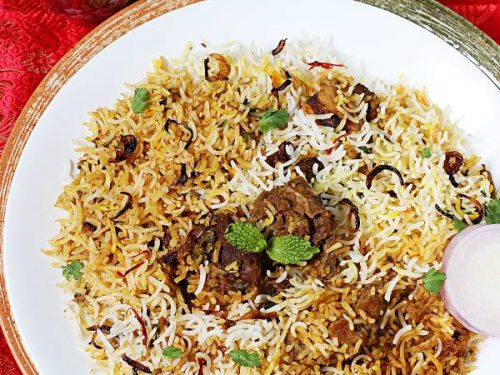 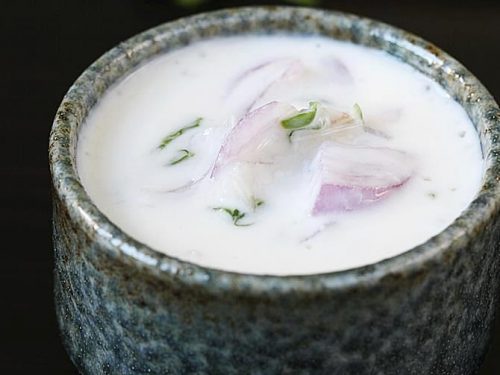 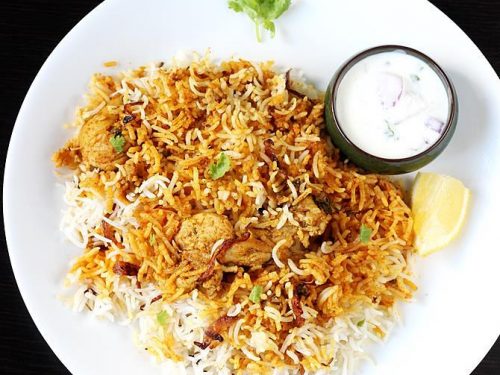 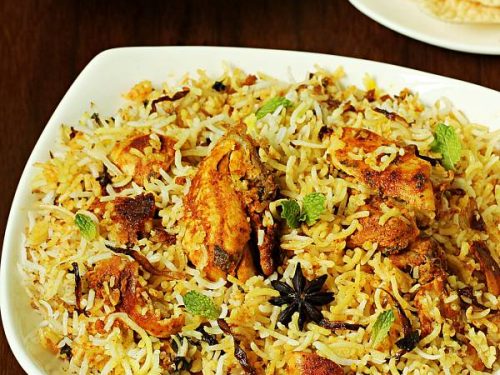 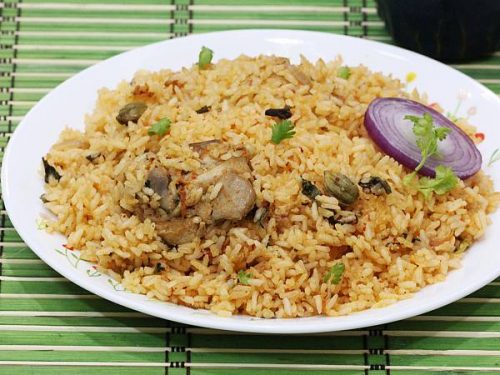 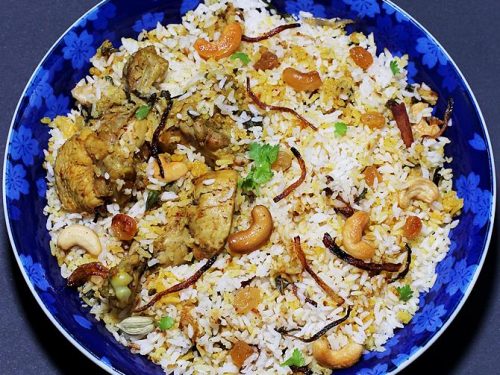 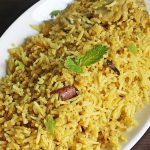 To make a fine paste

If you are making mutton biryani, use tender mutton and before adding the rice make sure it is cooked fully
You can increase the quantity of oil by another one to 2 tsps for added taste
For oven method: place the rice for dum in the preheated oven at 180 c for 15 to 25 minutes
For the pressure cooker method: close the cooker lid when the rice is cooked 75% and lower the stove flame to minimum and cook for 5 minutes, don’t let the cooker whistle