Soya chunks biryani or meal maker biryani is one of the protein enriched easy biryani that one can make. It can be served without any side dish, however a simple onion raita or a mint raita also goes well with this.

Soya chunks biryani can be made in a pressure cooker or in a pot, however you are comfortable. To make a pulao, just eliminate the biryani masala powder and coriander leaves from the recipe, you will be left with a great tasting pulao rice.

This can be made quickly anytime either for lunch or dinner and also goes well in office lunch box or school box. This recipe is roughly adapted from the most flavorful veg biryani recipe on this blog.

1. Bring 3 cups of water to a boil, add soya chunks and leave them to soften. Rinse them and squeeze off the excess water. Repeat washing and squeezing.

2. Blend the ingredients mentioned under to grind and make a paste.

3. Marinate soya chunks with the paste, lemon juice and set side for 15 to 30 minutes.

4. Add oil to a pan or pressure cooker and heat it. Fry the spices for a minute.

5. Add marinated chunks and fry for about 2 minutes.

6. Add curd or coconut milk and turmeric. Stir and cook till the mixture begins to leave the sides for about 2 to 3 minutes.

8. Add rice and cook till all the water evaporates.

9. Cover it with a tight lid and cook on a low flame for about 5 to 6 minutes. For pressure cooker, switch off before the cooker whistles. 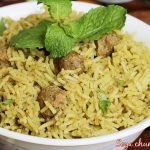 To grind and marinate with 1 tbsp. lemon juice

Hi, I. tried this recipe today. It turned our really well and my little one loved it too. Keep sharing. Thank you 😊

All your recipes are super good and I as a Punjabi get that authentic taste in all your recipes.♥️. Thanks for adding taste in my kitchen and my kids now love home made more than restaurant made.

Hello Leena,
So glad to know! Thank you so much!
🙂

Hi for some reason the marinade was extremely bitter especially after cooking. It was bitter even after i made it and became more bitter when cooking. I simply don’t understand why as there aren’t any bitter foods in it. Would you know why?

Hi Helena
It should be the ginger or the onion. Hope you peeled the ginger. Ginger skin can leave a bitter taste. Also try skipping the onion next time & follow the recipe. Some kind of onions when pureed impart a bitter taste. Hope this helps

Thank you for the tips

The recipe mentions to use turmeric (step 6), but it doesn’t explain in what form ie grated, chopped etc.

Please can you help –

Hi Claire
It is ground turmeric.

Very flavourful recipe … Swasthi… you are the best . All your recipes are so perfect ?

Thank you so much Rupa!
🙂

I tried the several youtube briyani receipes but this one it turned out well and happy about that.. thanks swathi.

How much water shall I use to cook rice???…

Thank you… Definitely I ll try this recipe….

Too good, Swasthi. Delectable! Thank you. 🙂

Welcome Sushmita
Thanks for trying

Being a southindian, i dont like the flavour of too much mint and corriander. So wat else can be added to marinate soya???? Still the receipe looks so promising…. ?

Hi Meghana,
Just skip marinating in the mint paste. Use 1 tbsp curd, with some turmeric, red chili powder, ginger garlic paste and garam masala. You can just slice the onions and fry with the spices until golden. Hope this helps

Yes shwetha
You can make it with the vegetables like peas, carrot and beans. Don’t think gobi will go well in this. Hope this help. Good luck
🙂

Hi Rupa
So glad to know your little boy likes this.
Thank you

I tried this recipe. Amazing everyone njyed. Thanks for wobderful recipe

Welcome, iam glad you all enjoyed the biryani

Every1 & even I felt that Soya Chunks Biryani tasted like Mutton biryani. & Paneer Tikka Masala, exactly tasted like restaurant style.

Thank you so much shalini,
you made my day. For a recipe to yield good results, one needs to be good at understanding the recipe and cooking as well. This shows you are a good cook too.
Im glad all the dishes turned out good
🙂

Hi,Very Nice recipe:). can u plz let me know what is the rice:water ratio if cooking in cooker and for how many whistles. Thanks,Shama

I generally use 1 rice : 1.5 cups of water for aged basmathi rice soaked for at least 20 mins.. foe pressure cooker method. There is also moisture from yogurt. Check my post on veg biryani using pressure cooker to get it perfectly non mushy.

Hi Swasthi i tried dis recipe today at my mum&#39;s house. Everyone enjoyed the biryani. I cooked on stove top then transfer it to rice cooker. Perfect but I made a mistake though. I didn&#39;t soak the soya chunks in the warm water.. but still it is a hit. Thanks for sharing. Good day.

Hi! Glad to know that you all enjoyed it. Soya chunks are soaked in warm water mainly to remove the dirt and dust as they are sun dried and also to soften them and remove the smell. next time, do soak them.Good day

another lovely recipe..must try it soon