Potlakaya perugu pachadi is a classic andhra style pachadi made with snake gourd and yogurt. Snake gourd is called potlakaya and perugu is yogurt hence the name. It can be served with plain rice or phulka. It is mildly spicy and delicious. It will be liked even by folks who do not like the flavor of snake gourd.

Snake gourd or potlakaya is one of the most nutritious veggies. It is commonly known as padwal in Indian language or hindi. It is widely used to make curry, stir fry and chutney recipes.

It is said to have many medicinal values too. It is a natural antibiotic, expectorant, and laxative. It can disperse phlegm, expel toxins and is anti-inflammatory.

There are not many options to prepare this dish. In Andhra cuisine, we just stir fry this veggie to make potlakaya fry.

Then cool it completely and blend. Then it is mixed with the tempered curd or yogurt. 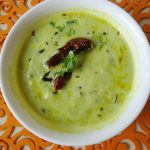 All the recipes I used so far from Swathi’s Kitchen came out nice.

Thank you! Glad to know!

instead of boiling the snake gourd, if fried in an open pan and added to curd, the taste and aroma are totally different and inviting

I tried this recipe nd it’s good. Me nd my husband liked it very much?. Usually I don’t like to eat snake gourd but this is so good. We can feed kids who don’t like snake gourd.

Thanks for the feedback

I tried this recipe nd it’s good. Me nd my husband liked it very much?. Usually I don’t like to eat snake gourd but this is so good. We can feed kids who don’t like snake gourd.

I for got to give feed back in last comment.

Thanks Ramya
Glad to know you liked it. Yes kids will like it

healthier one.. just love the color..

I make curries with snake gourd, not chutney. I need to try this Swasthi.

New to me ,looks very tempting.

this is new to me…sounds interesting and looks yummy…liked the colour.

Very new to me.. will surely try.. looks nice.

This is totally new to me, but looks very tempting and a great recipe idea!

We dont get same quality Snake Guard here.. this looks so flavourful… <br /><br />Would love to try it on my next trip to India..