Most andhra households make a chutney known as pachadi for their everyday meals. Some times my mom makes this sorakaya perugu pachadi instead of the regular pachadi.

It is healthy, spicy & tastes delicious. We mostly make this during summers.

This is a no onion and no garlic recipe and hence can be prepared for festive meals.

Sorakaya perugu pachadi can accompany rice or chapathi and is quite easy to cook. Use green chilies generously, yes but to suit your tolerance levels.

Bottle gourd is one of the most commonly used veggie in Indian cuisine and is known by different names in regional languages. It is known as lauki in hindi and dudhi in marathi.

It is known as lauki in Hindi and is often used in the north Indian cuisine to make sabzi, lauki halwa & lauki koftas.

In South Indian cuisine it is mostly added to dal recipes. Dishes like Sorakaya pappu and sorakkai kootu are popular. 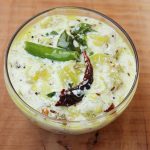 bottle gourd in seasoned yogurt, goes well as a side dish with plain rice or chapathi or phulka
Pin Recipe Print Recipe