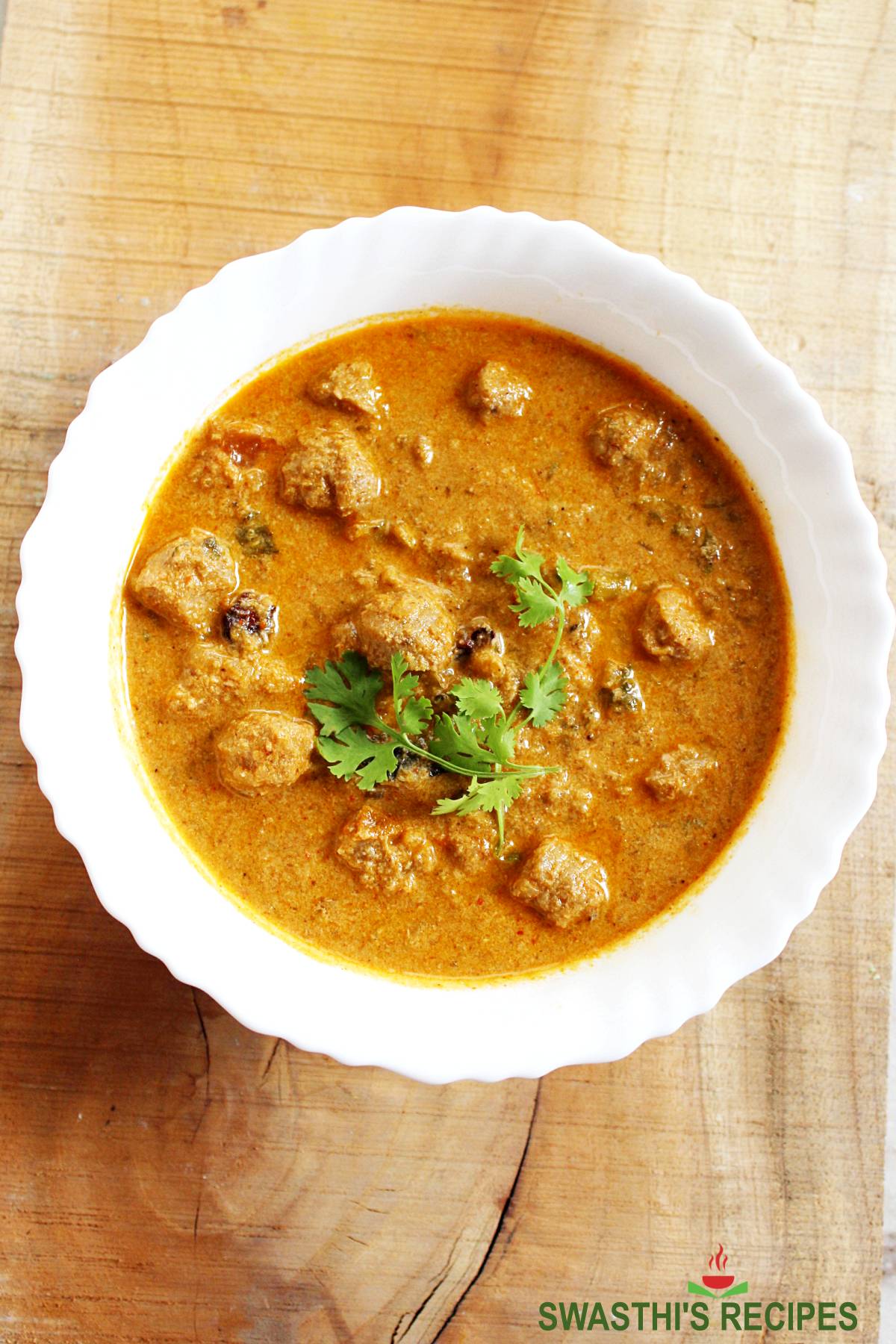 Soya Chunks Kurma also known as Meal Maker Kurma is a delicious South Indian dish of curried soya nuggets in a spicy and flavorsome kurma gravy. Kurma is the South Indian version of the North Indian/ Mughalai Korma and is a popular dish made with mixed vegetables or meat. This soya chunks kurma is one such variation from my Mom’s kitchen, where she would replace veggies and meat with soya chunks. This meal maker kurma goes well with flavored rice varieties like Pulao, Ghee rice, Jeera rice, roti, chapathi or paratha.

This dish can be made ahead and in fact tastes best after resting for a few hours as in the case of meat. So you can very well prepare this 2 days ahead, refrigerate and then reheat to serve.

Soya chunks, known by different names such as Soya Nuggets, Soya Wadi & Meal maker is a vegetable textured protein made with defatted soya flour. As the name says, these are in the form of chunks and granules. The chunks are also known as nuggets and the granules as soya keema.

It is identified as a great mock meat in India and eaten in various forms such as curries, kebabs, burger patties, pakoras etc.

Since Meal maker is a highly processed food, it is ideal to eat this in moderation and wherever possible please use organic soya products only.

Back to this soya chunks kurma, the base of the kurma is made with onions, tomatoes, coconut and white poppy (optional). In South India, most kurma recipes used poppy seeds for the texture and milk aroma it imparts to the dish.

For this post, I shot the pictures while I was in India in my Mom’s place so I used poppy seeds and fresh coconut. However I am not accessible to poppy seeds in Singapore so I always make this dish with coconut milk or just coconut & sometimes with a few cashews as well. For the replacement, you can also use plain yogurt that’s not sour.

To keep the recipe simple, I have not used any green peas or potatoes. But they add another layer of flavor to the dish so feel free to use half cup green peas or 2 medium potatoes (diced).

For the ingredient quantities, please scroll down to the recipe card. Gather all your ingredients and follow the steps here.

1. Add soya chunks to hot water and let them soak till they soften. Squeeze up the water and rinse them in water and squeeze off excess water. If desired you can chop each chunk to 2 pieces.

2. Add soya, salt, ginger garlic paste, red chili powder, garam masala and lemon juice to a bowl and marinate the soya chunks. Keep this aside till we use.

3. This step can be skipped if using yogurt or coconut milk alone for the kurma. If using poppy seeds, dry roast or sundry them till crunchy. Add poppy seeds or cashew nuts along with saunf to a blender jar and powder them finely first and then add the coconut and make a fine paste with little water. Set this aside. If you do not have a good blender, don’t use poppy seeds.

4. Heat a pan with oil, add bay leaf, cardamoms, cloves, cinnamon, shahi jeera or jeera and star anise. You can skip using star anise, if you don’t have.

5. When the spices sizzle, add onions, chilies and fry till they turn golden.

6. Add tomatoes. My tomatoes were not juicy, so I sprinkled little water and salt to soften them. Cook till the tomatoes turn mushy.

7. Add the marinated chunks along with mint and coriander leaves. Fry till the raw ginger garlic smell vanishes, for about 5 minutes on a low to medium flame. I used a spoon oil to prevent them from burning at this stage.

8. Add the ground coconut paste. If using yogurt, Pour it to a bowl first. Take a few tablespoons of the onion tomato masala to the yogurt, whisk it well. Pour that to the pot. Add saunf, garam masala and coriander powder to a blender jar and powder it, an easy way to powder little saunf.

9. Add red chili powder, coriander powder, garam masala powder and fry again for 3 to 5 minutes or till you get a good aroma of the masala.

10. Pour water as needed to get a gravy. Do not add too much water, it will thin down the soya chunks kurma. Check the salt and add if needed. If using only yogurt, you may not need much water. Cover and cook till the chunks are soft and the gravy turns thick enough to suit your taste. You will see traces of oil over the kurma when it is done. 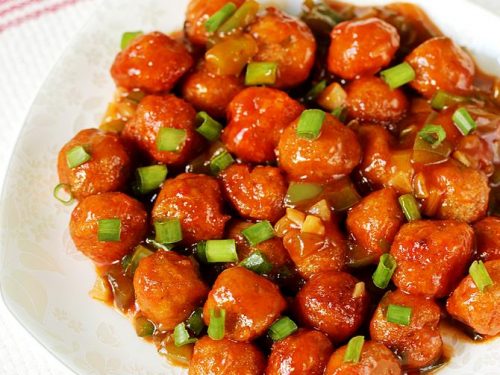 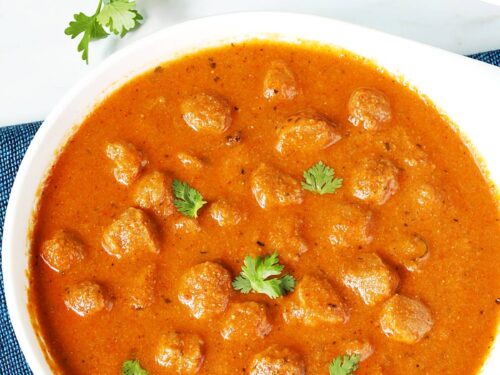 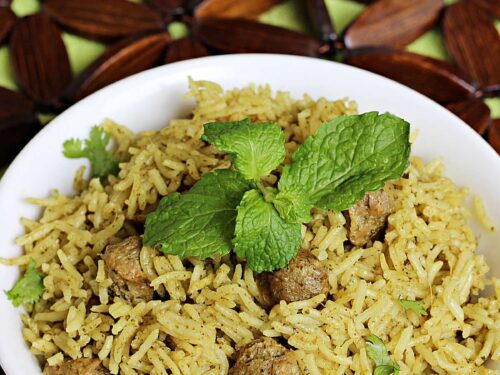 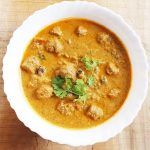 I tried this out. Its an absolute hit with the family. I love your recipes. Yours is the only site where I can get a palatable dish following your instructions and tips verbatim. I send my son who’s a hosteler your recipes, to try out with his friends.
Thank u and keep posting

You are most Welcome! Thank you so much for the trust! Glad you like the recipes.
🙂

The way you present and the detailing of each step is commendable.great applaud for all the efforts u take to make r life better.lots of luv…
Soumya

Hi Soumya,
You are welcome. Happy to know the recipes are helpful. Thanks a lot.
🙂

Fantastic ,, very unique approach towards the kurma ,
Never came out this good and subtle
Master stroke was soya marination which was brilliant ,
Thanks you ma’am

Welcome Paramesh
Glad to know the kurma turned out good. Thanks for trying

Good and easy recipes who can make easily

Hi, Thank you for posting this yummy recipe.. I really loved this one..

Tried this one…. yummm… it’s a keeper! You recipes are wonderful n easy… keep up the good work!:)

welcome Menaka
I will update it
Thanks for trying

Thanks for sharing very tasty

Thanks Keerti
Glad to know you liked them

Nice taste, I had this with phulka.

My gravy became few thin, what can I do to have thick gravy. If using daliya then how much & when to use.

Hi Shalini,
Hope you r doing good. Happy reading ur comment after a long time. You can add daliya along with coconut and powder I guess you added more water. You can also fix it now, just make daliya powder, stir with 2 tbsp water. Pour it to the gravy and cook until it thickens.Hope this helps
I tried your fish fry recipe last weekend. Will be sharing it soon on the blog.