Haldi or Turmeric known as Haridra in Sanskrit is a rhizome that is considered to be Tridoshic and is said to balance all the doshas (disturbances) in the body.

So it is widely used in Indian foods not only for health benefits but also due to religious belief that it sanctifies/ purifies the food. In every Indian household this is one of the spices that is used regularly in curries, sambars, chutney and many more dishes.

Apart from adding a beautiful yellow color, this spice also adds a earthy flavor to the foods.

When taken internally as a medicine, Turmeric may not be suitable to all and may result in adverse effects like nose bleeds, severe rashes, dehydration, acidity or constipation.

Hence an expert’s advice should be taken when consuming turmeric for treating ailments.

What is turmeric milk or golden milk

Haldi ka doodh or Turmeric milk has been most commonly consumed in India during the harsh winters to prevent and treat cold, congestion, clear up phlegm from the airways inside the lungs and to help sleep better.

Turmeric added to whole milk (full fat milk) avoids dehydration due to the high hydration index of milk. So we Indians believe that turmeric milk is safe to be consumed even by kids and toddlers (with no known reactions to turmeric/haldi).

Traditionally turmeric milk was prepared with turmeric root & crushed long pepper known as Pipli or Pippali in Indian language.  Piperine, a compound found in long pepper was believed to enhance the bioavailability of curcumin in turmeric.

Over the years long pepper has been replaced by black pepper which also has piperine and is believed to be effective.

How to make turmeric milk

1. Bring milk to a boil. Allow the milk to cool down a bit.

2. When the milk is slightly hot, add pepper powder and turmeric powder or paste. My kids drink unsweetened milk, so I do not add any sweetener.

3. Stir well until the turmeric blends well with milk. Mix well with a spoon and transfer to a cup. I do not filter the cream or pepper, if you prefer you can.

It is best to consume turmeric milk when it is warm preferably at bed time.

Tips on how to use turmeric

1. Always use organic turmeric powder or turmeric root and avoid chemically treated roots which are worse for our body.

2. Fresh turmeric root is more effective than ground powder. But finding a organic fresh root is hard. If you are able to source it you can freeze it and use as and when needed within 3 months.

You can grate the root and add it to hot milk and let it steep for a while. Then consume it. You can also fiter it.

To use the dried root, rinse it thoroughly. You can grate it and use or alternately rub it against a flat stone with few drops of clean water.

Special flat stone tables are available which are used for rubbing sandal wood and turmeric root. You will get a smooth paste after rubbing the root for 5 to 7 minutes.

How to consume turmeric milk

We usually start turmeric milk at the first onset of the symptoms like stuffed nose, congestion or cold. In India, we also consume it to prevent cold especially during the harsh winters.

I give turmeric milk to my kids for maximum of 3 to 5 day as a preventive measure before we travel out of Singapore. I ensure they also drink lot of water & fruit juices with high vitamin C that helps to keep them hydrated & build immunity. 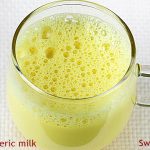 Golden milk or Turmeric milk is a traditional Indian beverage made with turmeric, milk and pepper.
Pin Recipe Print Recipe

Disclaimer: This post is to provide information only and should not be considered for treatment or cure of any disease. Please see the doctor for appropriate treatment. 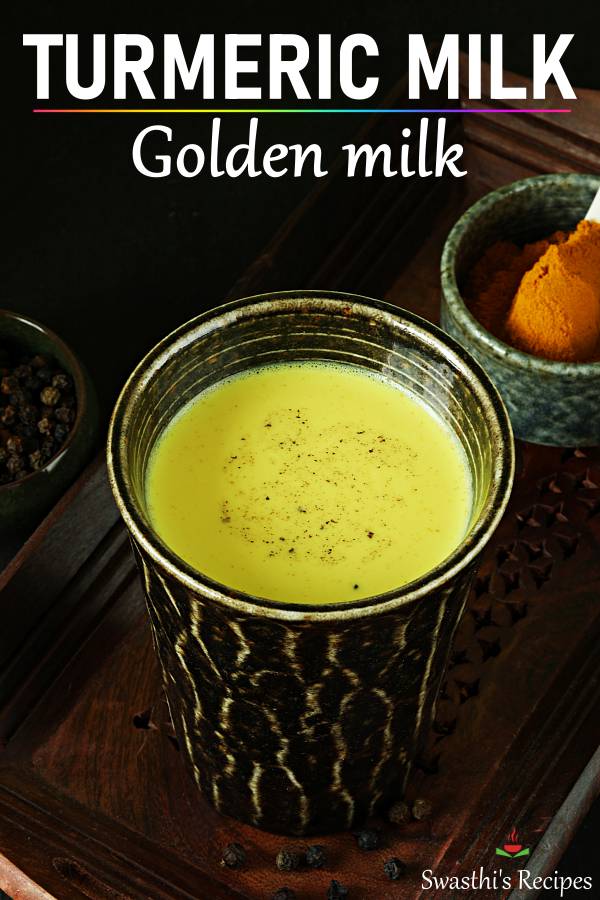 Thank you for your most invaluable recipe!

I intend to use soy milk, instead of dairy milk. Is it possible?

And is it necessary to bring the mixture to a boil. Or can I just stir all the ingredients together, without boiling?

Hi,
It is good to have it warm if you have cold or related symptoms. You can stir the turmeric and pepper to little hot water. Then add soy milk to it. Hope this helps

I loved and addored all your information and i certainly will try both the tumeric milk (now when I learned form you who to make it) which I were after for a long time, and also the massala tea

Thank you so much.
Yes do try them

Can you recommend a good non-dairy milk alternative for a vegan version – for an adult with a cold?

Hi RuTu
You can try with sesame milk. For 1 cup sesame seeds you can use about 3 cups water and blend. It makes a little over 3 cups milk. 150 to 200 ml of this milk per day is fine to use. Add turmeric to hot water. Then stir in to the sesame milk. Hope this helps.

Hi Swasthi,
If we are using organic raw turmeric, how much we should put it? I normally grate a small portion of the turmeric and put it. Can you suggest if I am proceeding the right way?

Hi Saharsh Taneja,
1/8 tsp of grated raw turmeric is fine for 2 yrs. If you make a paste like the way I mentioned in the post, then you will have to halve it. Yes you can continue the same way you are doing. But do you think the grated one is working well. I was told to make a fine paste as it absorbs well especially for small kids.

Thanks a lot Swasthi.Ok,now I got it, you have recommended the dosage when given it as a medicine.Actually i’ve heard that it can given every week even when not having cold or cough coz that will boost the immune system. So was planning to give entire winter season max 3 days per week alternatively. So can i give her this milk for 3-5 days consecutively when she has cold And then every week for 3 days alternately once she has recovered? What if she doesnt recovers in 5from cold and cough when taken given consecutively?should we continue or stop giving it?

Hi Teena
Yes you are right. As a preventive measure to cold I think thrice a week should be okay. During cold with turmeric milk if you do not see recovering in 2 days & 1 night, you should see a doctor. It may not be good to wait any longer as long as 5 days is not good. Most kids develop infections by 3 to 5 days during cold season. Seeing the doctor in time can prevent the consumption of antibiotics. Hope this helps.

Thanks a lot dear.

my daughter who is 4 years old seldom drinks milk and that too with sugar. So can I add sugar with Haldi and pepper? Secondly, am thinking of giving her max 3 alternate nights in a week coz I’ve heard too much is not gud ,for this winter .u had recommended 5 to 7 days for 4 years and above, that means 5 -7 days in a week? and the amount to be 1/4th of a teaspoon every time I give her ?This is what I could make out of this blog. Please correct me dear if am wrong. And does the efficacy of this milk reduces if the milk cools off ?coz my kiddo drinks so slowly that max times she ends up drinking cold milk.

Hi Teena
Yes if she doesn’t drink then add little sugar. As i have mentioned in the post too much is not good and may dehydrate. 1/4 tsp is if she has completed 4 yrs. My experience is it has to be taken at least for 3 consecutive nights other wise it will not work. The symptoms will return after missing the next dose. But yes if the symptoms improve after 1 st dose then you can halve the dosage meaning 1/8 tsp and continue for 3 to 5 days. 7 days is for 7 yrs old. Yes warm milk works best. Cold milk doesn’t get digested and leads to phlegm. You can put the milk cup in hot water when ever she takes a break. Milk will warm up again. Give her lot of warm water as well.

this is good…please keep it up