Banana bajji recipe – Aratikaya bajji are a popular tea time snack from Andhra cuisine. These are commonly made in most households and is also a street food. Bajji refers to a deep fried fritter popular in South India and bhajiya is a word used towards North India. Banana bajji are made much similar to the green chilli bajji or Mirchi bajji.

Raw banana is called as aratikaya in telugu. Hence the name “aratikaya bajji”. Most andhra restaurants would have these on their menu as a starter or a snack.

Aratikaya bajji recipe shared here is the way my mom would make for us. They turn out to be flavorful, crispy and tasty. To get the best taste, I suggest you stick on to the measurements mentioned below.

She would always stuff these with fine chopped onions, green chilies and coriander leaves. Splashed with a dash of lemon juice to cut down the heat.

These banana bajji are great to have with churumuri or jhal muri.

Note that all ingredients should be at room temperature, in case you have the habit of storing your flours in the refrigerator.

2. Add very little water to make a paste. Use little otherwise it can mess up your kitchen with spills. Set this aside

4. Heat oil in a deep pan for frying

5. Peel and slice raw banana. Add them to water.

7. Remove the sliced banana and add them to a colander. Ensure there is no water in them.

8. When the oil is hot, put on the flame to medium heat.

9. Dip each slice in batter and swipe off the excess batter and drop in the oil.

10. Fry till golden, drain them on a kitchen tissue and serve hot or warm

Mix chopped onions, green chili, coriander, little salt and lemon juice. Make a slit on the aratikaya bajji and stuff them just before serving else they will turn out soggy. 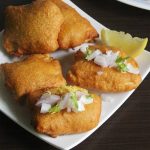 How to make raw banana bajji

All ingredients should be at room temperature, in case you have the habit of storing your flours in the refrigerator, keep them out for 1/2 an hour before you proceed.