Masala vada is made by coarsely grinding soaked chana dal or bengal gram. Then spices, onions & herbs are added to the dough. This dough is then shaped to small disc or patties & deep fried.

Massala vada is also known as chana dal vada in some parts of India. These are crispy, very flavorful & addictive in taste. The street style masala vada is much loved by most south Indians & are enjoyed with a cup of masala tea.

If you are looking for a street style masala vada, then this recipe is absolutely for you. This recipe will yield you flavorful, super delicious & crispy chana dal vada!

Masala vada from the street stalls are very flavorful due to the addition of mint and coarsely crushed spices, especially cinnamon adds a unique aroma to these. This recipe yields chana dal vada that comes very close to the ones served in south Indian street stalls and restaurants.

1. Wash 1 cup chana dal several times until water runs clear. Soak it in water for 2 hours. Drain off and set aside. Make sure there is no water in the dal. Do not over soak.

3. Make a slightly coarse powder. Set it aside.

4. Drain the water from the dal. Take 2 tablespoons soaked dal and keep it aside with spice powder. To the same jar add rest of the soaked dal, ½ teaspoon salt and pulse it several times to get a coarse mixture. We also need to have few lentils intact to get the right texture. So pulsing it does the job.

6. Mix together all the ingredients to get a well binding mixture. To check, take a small portion of the dough and shape to a vada. The mixture should hold shape well and not fall apart.

If it does not bind well, then take only a small portion of this mixture and blend again and then put back to the bowl and mix to check.

How to make masala vada

7. Divide the mixture to 9 portions. The easiest way to shape these chana dal vada is to take a small portion of the mixture, make it to a ball. Place it on the left palm, flatten it, then reverse it on the fingers of right hand and drop in hot oil.

Beginners can make these on a foil or cling wrap or on a moist cloth too.

8. On a medium flame, heat oil in a pan for deep frying. Do the heat check by sliding a small portion of dough to the hot oil. The dough must rise without browning. This is the right temperature. Gently slide the vadas one after the other. I fry about 3 in each batch. Do not disturb them after adding to the oil until they become firm. This may take about 2 mins depending on the flame.

9. Later turn them to the other side with and fry until golden & crisp on both the sides. Drain them on a kitchen tissue or a colander.

10. To fry the next batch of masala vada ensure the oil is hot enough and not too hot. Do not crowd adding a lot of them one time while frying.

Masala vada are also prepared during festivals in most South Indian homes. These are usually served alone with tea as a snack or with coconut chutney for breakfast. They can also be served as a part of festive meal. Here is one such meal – lemon rice or puliyogare, curd rice & rava kesari.

I made these masala vada for a special family occasion few weeks ago. Sheera, beetroot halwa, mixed veg kurma, masala vada Coconut rice, and pudina chutney were part of our meal.

1. Soak the chana dal just for 2 hours. Chana dal vada made with over soaked dal will not turn out crispy. I usually do it for 1½ hours, drain the dal and then prepare the rest.

2. Do not skip the spices & mint leaves as they are the key to make the vadai flavorful. If you do not have mint you can still make them by adding some coriander leaves but the unique aroma will be missing.

3. If you are making for a festive meal or do not consume onion & garlic. Simply skip them, but do not skip ginger.

4. Blending the chana dal to a coarse and thick consistency is very important. If the dough has lot of moisture then the masala vada will not turn crunchy.

5. Traditionally no flour is added to the masala vadai dough. But by mistake if your dough becomes too soggy with lot of moisture then add little rice flour or powdered poha. Adding rice flour does alter the taste of the chana dal vada and should be used just to fix the consistency.

6. The shape of the masala vada must be flat and slightly on the thinner side. Do not shape them very thick as they will turn fluffy in the center and not taste good. 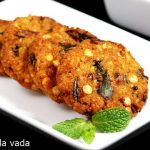 Masala vada or chana dal vada is a popular lentil snack from south Indian cuisine. They are made using bengal gram, spices and herbs. It is a street food and is also made in most homes. Masala vadai is served with a chutney.
Pin Recipe Print Recipe

How to make masala vada 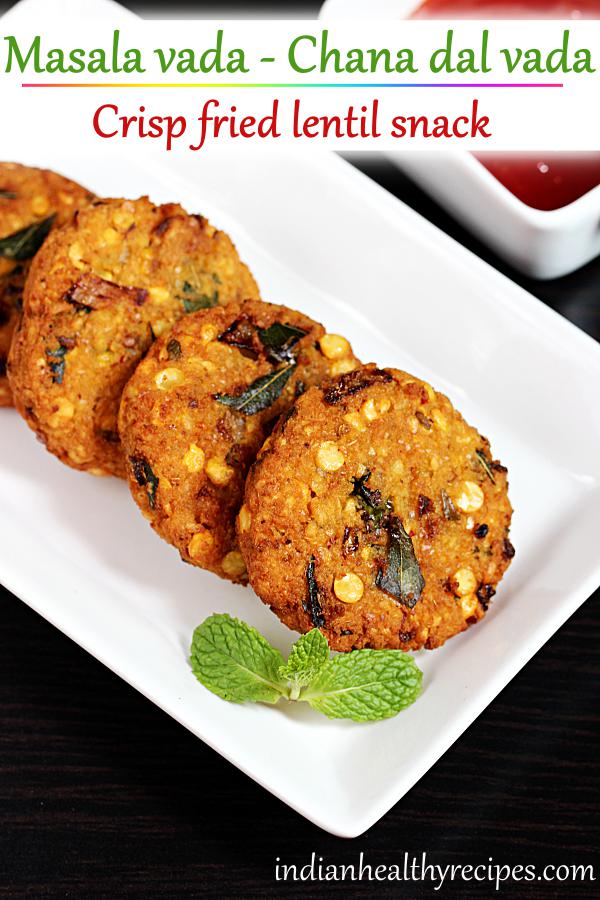 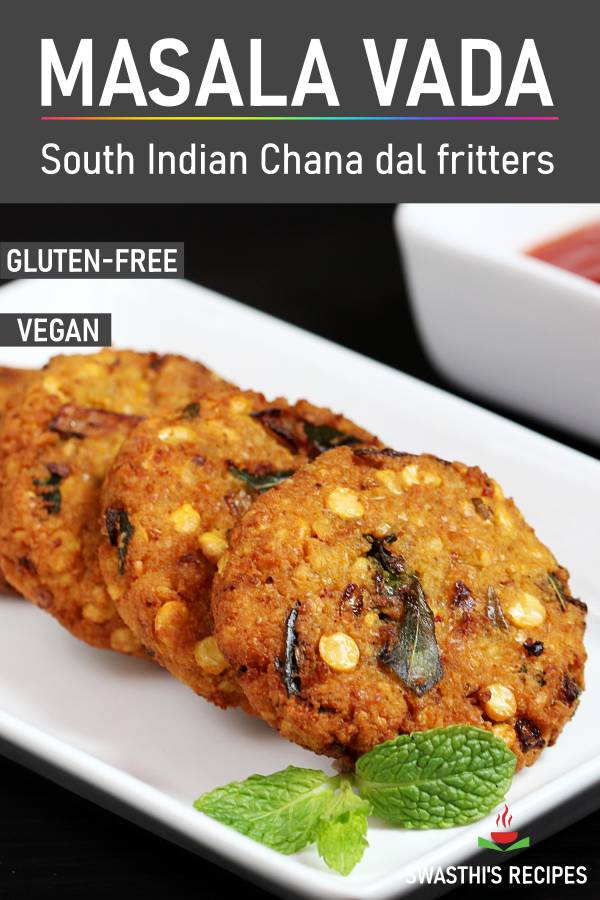