Besan ka halwa is a delicious and aromatic dessert made of gram flour, ghee, sugar and nuts. It is one of the halwa varieties that is most commonly made in the North Indian households. Besan ka halwa has a special nutty aroma & taste that comes from roasting the besan in ghee. It can be prepared during any festive occasion as it is simple to make and just needs few ingredients.

The key to making good besan ka halwa is to roast the besan or gram flour well in ghee until it begins to release a nutty aroma. Besan halwa can be made with milk or with water and both ways it tastes good.

If made without milk it turns to light brown color. My fussy kids refuse to eat the brown color halwa so this time I made it with milk just to get the nice bright color.

Do not reduce the amount of ghee in the recipe otherwise the halwa may have lot of lumps.

2. Then pour 1 cup water. You can replace with milk.

3. Next pour 1 cup milk. You can replace with water.

4. Dissolve sugar and bring to a boil. I added a pinch of saffron for color.

7. Besan must be coated well with ghee.

8. Begin to roast on a medium flame until aromatic and deep golden. This step is very important and make sure there is no raw smell in the besan. When it is done, you will get a very nice aroma. Add cardamom powder.

10. You may find few lumps here and there, just break them with a spatula and continue to cook. After few minutes the halwa turns thick absorbing all the moisture. Then add 1 tbsp ghee.

11. Continue to cook until besan ka halwa begins to leave the pan and becomes a mass. I cooked further for another 4 to 5 mins.

Remove besan ka halwa to a serving bowl and garnish with sliced almonds and pistas. 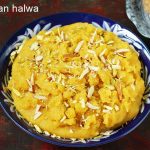 Besan ka halwa is a Indian dessert made with gram flour, sugar, ghee and nuts. It can be eaten as a after meal dessert.
Pin Recipe Print Recipe

The ratio of ghee to flour is very important in the recipe. So do not reduce the quantity of ghee otherwise lot of lumps will form in the halwa. You can also add sugar after cooking the besan in milk. But sometimes sugar doesn’t dissolve well so I dissolved it in the milk first. 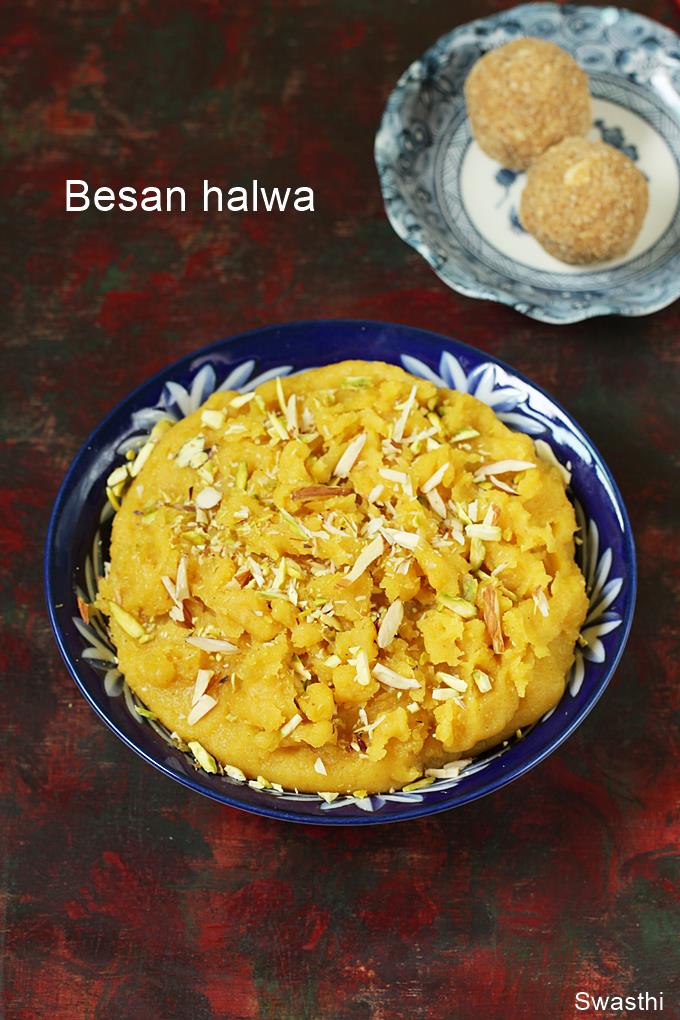