Dosakaya pachadi recipe a traditional andhra cucumber chutney recipe also known as dosakaya chutney. It goes great as a side to plain rice or chapathi with ghee. Cucumber is called as Dosakaya in telugu. One of the best low calorie vegetable that is good for weight watchers. Cucumbers are high in vitamin c and vitamin A, low in sodium content and zero cholesterol. Consumed raw, we get all the benefits from this vegetable.

The variety that is used to make this raw dosakaya chutney are also called as Indian curry cucumbers, they are round in shape as you see in the picture below. This could be one of the healthiest ways to enjoy cucumbers since they are not cooked , meaning no loss of nutrients. These cucumbers are also used to make curry, sambar and pulusu. You may also like to check this dosakaya pappu and this dosakaya avakaya.

This andhra cucumber chutney is called as dosakaya pachadi or dosakaya mukkala pachadi and it is one of the most relished chutneys from the Andhra Cuisine. Very easy and simple to make, yet tastes very good. This is usually served with hot rice and ghee.

There may not be many variations to this basic Andhra cucumber chutney recipe. Some use brinjal/ eggplants along with cucumber , stir fried eggplants are coarsely blended in a blender instead of the cucumbers. In this recipe, all the ingredients are used raw; frying green chilies in oil is optional.

To make dosakaya pachadi, always use a hard and raw cucumber. Do not forget to check the cucumber for bitterness, as many are tend to be bitter. Though the seeds and skin have nutrients in them, I never use them since they are harder to digest. Many cucumbers have wax coating on them, that’s another reason why I do not use the skin.

I have updated the post with new image (the main image). Ingredients you see in the picture below are what I used.

How to make dosakaya pachadi or cucumber chutney

1. Slit and fry green chilies in oil till they are fully fried, takes 1 to 2 mins. Set aside to cool completely. If you like to use chana dal and urad dal, roast them till golden. Set aside.

3. Powder the dals first if you have roasted. Add green chilies, cumin/jeera, salt, turmeric, garlic, and handful of the chopped cucumber pieces. Blend to a smooth chutney. Keep the rest of the cucumber pieces aside. If you do not like to have pieces you can also blend the entire cucumber.

4. Pour the ground mix over the rest of the cucumber pieces, add salt chopped coriander leaves.

5. Temper this with the tempering ingredients. Mix well. 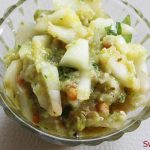 Andhra dosakaya pachadi is also known as dosakaya chutney or dosakaya mukala pachadi. It is prepared with raw cucumber and is often made in Andhra homes. It is served in Andhra restaurants as a side dish in a Andhra meal.
Pin Recipe Print Recipe

If you wish to use tamarind paste, add tamarind to hot water and soak it for a while. or microwave for 30 seconds. squeeze of and filter it thru a colander to remove impurities. you should make a thick paste
If you wish to use brinjal/ eggplant, chop to small cubes, fry them in the pan after you fry green chiles, sprinkle salt and fry till they are fully cooked. cool off and then blend it in a mixer and follow the rest of the recipe
1/2 table spoon each channa dal and urad dal can be roasted and blended along with chilli first to a fine powder and then add the few chopped cucumber pieces. This adds aroma to the chutney, but is optional. The chutney tastes great even without this.