Garam masala recipe shared here is a simple basic one that is flavorful, not pungent and is suitable for most veg curry recipes and preparation of snacks recipes. You can also use this for non-veg recipes if you like mild flavors of garam masala. For added flavors use with additional dry spices in seasoning. Using too many kinds of spices for everyday cooking, can dehydrate the body and lead to acidity problems. Hence this recipe is kept simple, meaning it is best suited for regular use and can be used for kids and toddler foods as well.

If you are looking for a more aromatic and spicier powder to make dishes like butter chicken, chicken curry, tandoori chicken, chicken tikka then try the Punjabi garam masala powder that I have posted earlier.

To make this simple garam masala recipe, we need very few kinds of spices which I have shown in the photos for easy identification. I have also mentioned few optional spices, you can try to include if you feel comfortable with that particular spice. 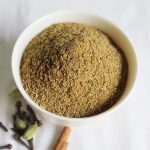 To make garam masala, spices used are below with photos

Green cardamoms called as elaichi in hindi, elakkulu in telugu.

Cloves are called as lavang or launga in hindi and lavanga in telugu.

Cinammon , called as dalchini in hindi, dasina cheka in telugu.