Paneer tikka recipe on tawa, in oven & air fryer. Tandoori paneer tikka is an immensely popular North Indian starter served in Indian restaurants. It is one of the most ordered vegetarian appetizer & is much loved by everyone for the amazing tandoori flavors.

So what is paneer tikka? Paneer tikka is an Indian appetizer where paneer chunks are marinated in spiced yogurt & grilled in a tandoor, a traditional clay oven.

These chunks are marinated in spiced yogurt along with diced onions and capsicum so they absorb the flavors. These are then threaded to skewers & grilled in tandoor. The resulting tikkas are so delicious, flavorful and are served with mint chutney or green chutney.

How is paneer tikka made?

Traditionally paneer tikka was made in clay ovens known as tandoor which impart a characteristic smoky flavor to the dish. Having these ovens at home is not possible.

So with time and trend changing, now these are also made in electric ovens and even on gas stovetop using tawa (Indian griddle/pans). I am sharing both the methods i.e paneer tikka in oven and on tawa using stovetop.

No matter whether we make on tawa on stovetop, in oven, in tandoor or on a barbeque, the marinade made is standard and same. This recipe yields a delicious starter that tastes just like the one served in restaurants minus the smoky clay oven flavor.

Honestly nothing can bring that same exact clay oven flavor & not even the dhungar or smoking the finished tikkas. However smoking them towards the end imparts a smoky aroma but is not the same.

Apart from serving these as an appetizer, you can also use them in wraps, sandwiches, pizza and even for making fusion fried rice.

1. To make this recipe, we need greek yogurt or hung curd (thick curd). If you do not have thick curd, you can check this post on how to make hung curd. I have used thick curd here. If you use runny yogurt, it will let out lot of whey while grilling and all the masala will come off to the tray.

Cube paneer to 1½ inch cubes. Keep aside. Then choose 1 large onion and bell pepper. Rinse and cube them to almost the same size of paneer. Do not chop them small as they shrink after grilling. Separate the layers of onions.

Make a fine paste of 1 inch ginger & 3 cloves of garlic. We need about 1¼ fine paste.

Optional: If making on a griddle or tawa add 1 tablespoon roasted besan. Dry roast besan until aromatic. It should lose the raw flavor, cool and add it. Or Roast the besan in 1½ tablespoon oil until fragrant and then cool it. Later mix with the marinade. Do not skip using besan it helps to hold the curd well to the paneer tikka. It also brings out a good flavor and will avoid messing up the tawa. This is done by many chefs for that extra flavor.

4. Add 1½ tablespoon oil. I have used mustard oil, you can also use any other oil.

5. Mix everything well. The marinade must be thick. Taste the marinade and add more salt and spices if needed.

6. Add capsicum and onions. Coat them well with marinade.

How to make paneer tikka

7. Move the veggies to one side of the bowl and add 200 grams cubed paneer and gently coat them as well. Handle with care they may break.

8. Cover and rest them in the fridge for an hour. If you leave them for too long, sometimes they break when you thread them on to the skewer later. If you prefer to keep them longer, thread them first and then refrigerate.

9. Next begin to thread them on skewers. With the quantities mentioned in the recipe card you can thread them on 3 large or 4 medium skewers. Paneer tikka on tawa and oven were made at 2 different times so the number of skewers seen in the pictures will not match the recipe.

10. If making on griddle or tawa, heat a tawa with 1 tablespoon oil. When it turns hot, place the skewers in the center and grill them on a medium heat.

11. Finally turn them around to grill evenly until they turn golden. Place a wired rack over a direct fire like gas stove. Place these skewers over the fire and grill on direct flame until char grilled. This step will ensure all of the marinade is cooked through.

Remove paneer tikka to a serving plate, brush them with butter. Squeeze lemon juice and sprinkle some chaat masala if you prefer. Serve paneer tikka hot with onion, lemon wedges and mint chutney.

Preheat oven to 450 F or 230 C for at least 15 to 20 mins. If using an OTG choose, grill option. Place the skewers on a tray lined with greased foil or parchment paper. Keep the tray in the middle rack.

Grill for 10 to 12 mins. Then move the tray to the top rack and broil for 2 to 3 mins. Do adjust the timing depending on the kind of oven and the thickness of the paneer cubes. Avoid overcooking them else they turn rubbery, chewy and hard.

Smoking paneer tikka: for a real smoky restaurant style paneer tikkas sometimes we smoke them with a hot charcoal after grilling. To do this I place a small steel bowl in the tray. Then hold a wood charcoal piece with tong and hold it over direct flame until red hot. Next keep it in the bowl and pour half teaspoon ghee.

You will begin to see fumes immediately. Cover the tray with another foil and let smoke for 5 to 6 minutes. You will be surprised at how smoky, aromatic and delicious your paneer tikkas will taste.

You can also air fry the tikkas at 390 F or 200 C for 5 mins. Brush them with the marinade and then air fry for another 2 mins. Lastly brush them with 1.5 tbsps of unsalted butter or mustard oil.

The timings change if lesser skewer are placed. Reduce the total time to 5 mins for 3 to 4 skewers.

I have not used any food color. Adding oil to the marination helps to get a good color from turmeric and red chili powder. Use a good and enough quantity of chili powder to get a vibrant color.

Use thick curd or greek yogurt for the marinade. Avoid using runny curd with lots of whey in it. Runny curd will let out lot of moisture while grilling and the masala will come over to the tray or pan.

Gram flour is optional. However it adds a unique nutty aroma to the paneer tikkas. It is a secret ingredient used in some restaurants for that unique aroma.

Mustard oil is most commonly used to grill tikkas. If you do not have just replace with any cooking oil. But you will miss out that smoky & pungent flavor.

Veggies like onions and bell peppers are always used as they both impart a nice flavor to the paneer tikka. You may skip them if you do not have.

Use good quality paneer for those soft tikkas. Avoid those having corn starch added to them as they turn out rubbery and chewy. Sometimes I use this homemade paneer. So I do not soak it in warm water prior to using. 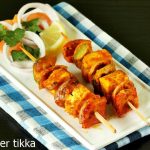 Paneer tikka is very a popular restaurant style grilled appetizer made with Indian cheese, spicy yogurt marinade and herbs. This recipe shows you how to make it on a griddle, in Oven & air fryer without a tandoor.
Pin Recipe Print Recipe

How to make paneer tikka on tawa or gas stove

Greek yogurt or thick curd If you do not have greek yogurt or hung curd (thick curd), add about 1 ½ cups of curd to a muslin cloth. Squeeze off and drain the excess whey from curd. Tie a knot and hang it to a hook for 1 to 2 hours. If the climate is hot, put it in fridge. It is very important to use strained yogurt or curd otherwise the marinade will turn runny and will not cling on to the paneer tikka. If making paneer tikka on tawa or griddle Do not skip using besan for the tawa method as it helps the curd to bind with the paneer well. Otherwise the marinade will turn runny and come on to the tawa while grilling then on pan/ griddle. 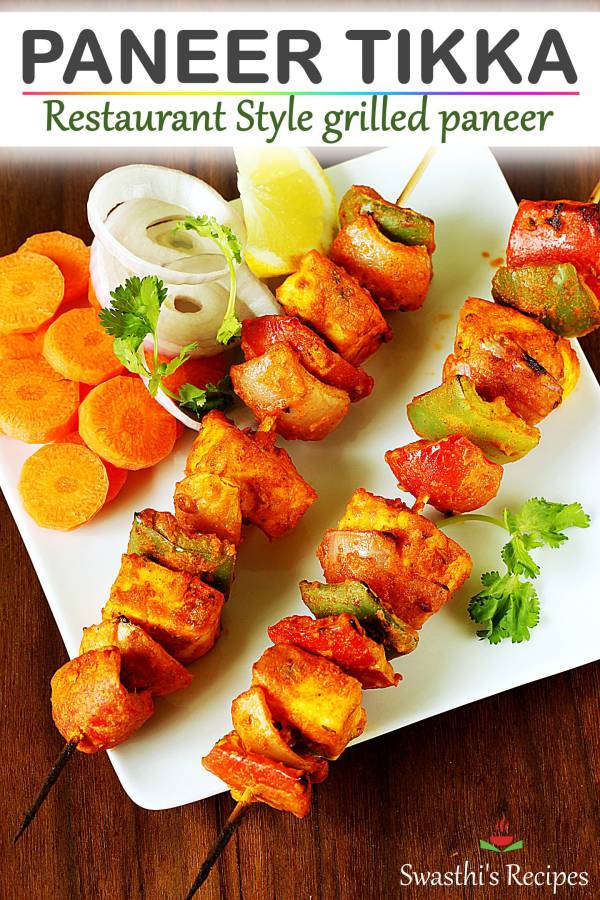 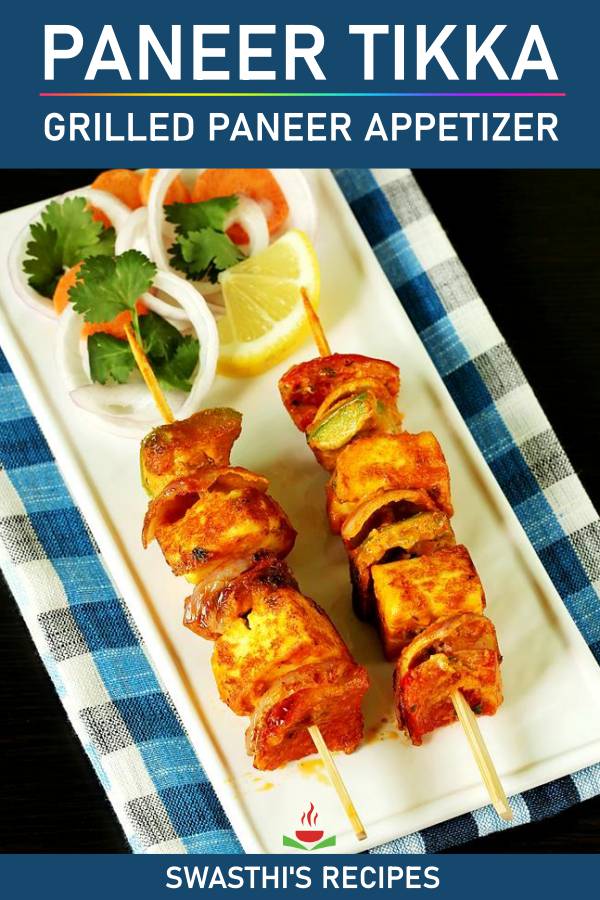