This is simple when compared to the traditional steamed or ukadiche modak. Since these rava modak are not steamed these are quick to make and saves some time.

I have used mould to make these rava modak, if you like to make them without a mould, then do check this post on How to make modak without mould.

1. Add coconut, jaggery / sugar and cardamom powder to a pan. I have used clean raw jaggery, so used it directly. If your jaggery has stones or debris, then melt the jaggery first with 2 tbsp of water on a low heat. When the jaggery completely dissolves then filter it and begin to cook. I have also added 2 tbsp water to the pan since I used desiccated coconut which has no moisture to melt the jaggery.

2. Stir and cook on a medium to low flame until the mixture thickens. Do not overcook else the mixture may turn hard. You may also get a dry mixture at this stage depending on the kind of jaggery or sugar used.

4. Add ghee and then rava to a kadai and begin to fry on a medium to low heat.

5. Semolina begins to emit a good smell when it is roasted. This step makes the covering taste good with a soft and smooth texture.

6. While the semolina is roasting, bring water to a boil.

7. When the rava smells good, lower the heat. Pour this water slowly. Keep the semolina stirring to prevent lumps.

8. Stir to make sure there are no lumps.

10. Cover and cook on a low heat until the water is absorbed completely and semolina is cooked. Cook for 2 mins until the mixture begins to leave the sides.

11. Cool this a bit. When it is still warm, knead the cooked mixture a bit just to make it uniform and sticky.

How to make rava modak

12. Grease the mould generously with ghee.

13. Take little portions of the mixture and stuff inside the mould. Make a hole in the center.

14. Stuff the coconut ball or mixture.

16. Open the mould and remove the rava modakam to the plate. These need not be steamed as the covering is completely cooked. 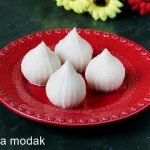 Easy rava modak recipe – one of the modak varieties made using semolina with coconut jaggery stuffing. These can be made for ganesh chaturthi.
Pin Recipe Print Recipe