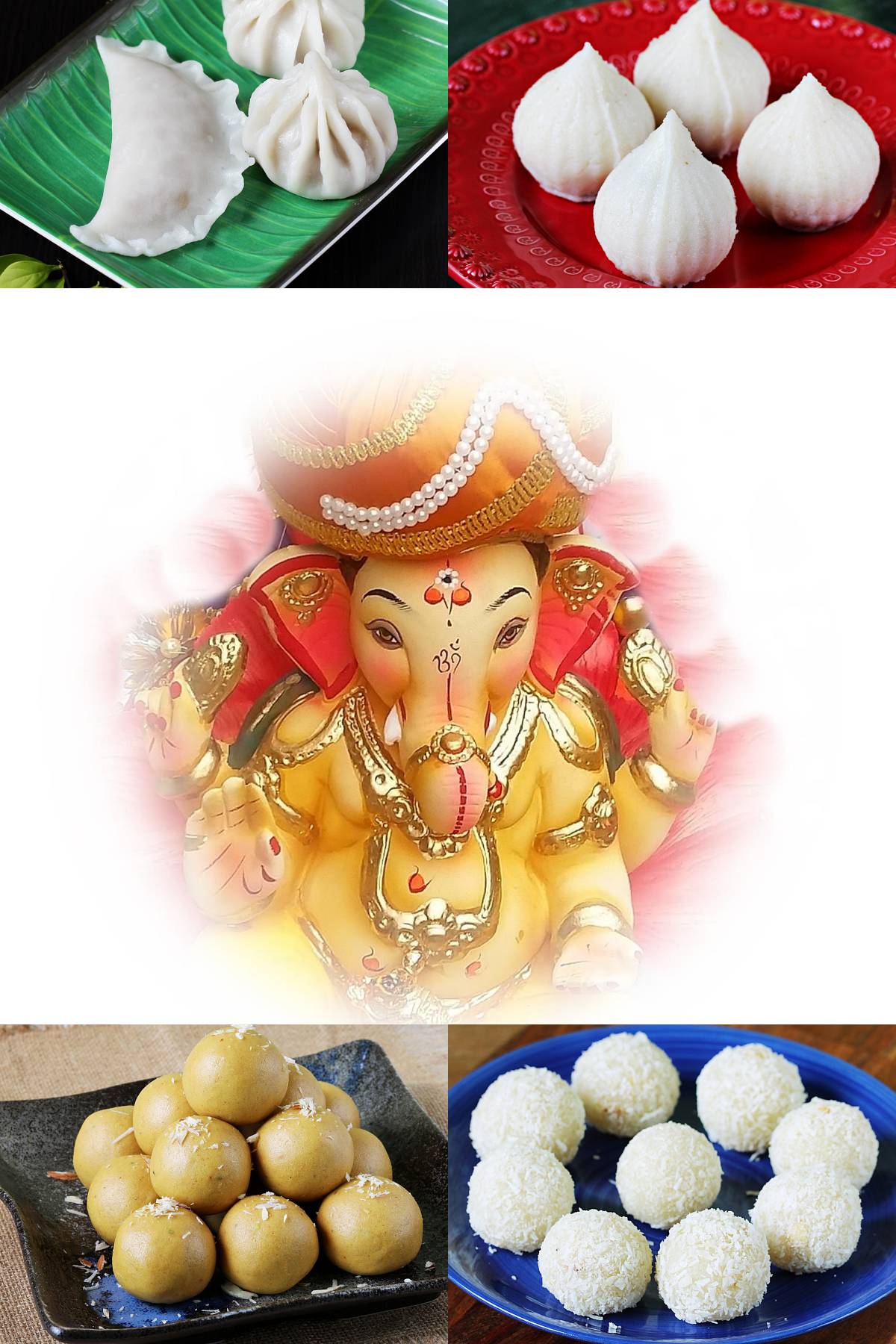 Everywhere else, the same is celebrated as Ganesh Chaturthi. This 10-day festival is rejoiced with immense devotion and grandeur not only in the Households but also in the Community places.

Lord Ganesha, the God of wisdom, prosperity, the remover of obstacles and sorrows is welcomed with much devotion every year on the day of Chavithi/ chaturthi, which falls in the Month of Bhadrapadam.

Though this festival is celebrated in many states, customs, traditions and foods offered to the Lord during the Chavithi puja are much different.

Making Turmeric Vinayaka, decorating the Palavelli, listening to the Vinayaka Katha are the key among the numerous traditions from Andhra Pradesh & Telangana.

Ganesha is Gajamukha, meaning he is elephant-headed. So fruits that are loved by elephant like Wood-apple (Velakkaaya), Bananas, Coconuts, Sugarcane and Pomelo (Pampara Panasa) are offered to the Lord.

Vinayaka is a Child-like God, so spicy and deep fried foods are usually not offered and they are reserved for the next days for the festive meal. Steamed foods are most commonly offered.

In this post I have put together many traditional Vinayaka Chavithi Recipes which qualify for naivedyam. There are also a few you can make during these days for your meal/ snack.

I have shared how we celebrate or follow the naivedyam making procedure towards the end of this post as many readers had asked me to share it.

This section is for those who wanted to know the procedure I follow at home.

I do not use any stock that exists in the pantry especially the opened packs of rice or jaggery or anything of that kind. We buy all new stocks right from dry fruits to rice, jaggery and everything else we need for the naivedyam and pooja.

I make my own rava and flours at home and do not prefer to buy store bought since it is for the Lord Vinayaka. However there are foods which i also made with store bought flour and offered to the Lord, breaking my rules when my kids were babies.

I have mentioned that where ever used. I make rice flour and rice rava for kudumulu and undrallu, one day ahead of the festival after a shower. Sometimes I also grate the jaggery and refrigerate, powder the cardamoms and these are meant exclusively for naivedyam only.

Rest all is prepared fresh on the day of puja like preparing jaggery syrup, making the flour for chalimidi etc.

On the day of chavithi, First thing after a shower would be to prepare large quantity of jaggery syrup and set aside for cooling for the payasam recipes else the payasam can curdle. I proceed further with the rest of the cooking.

Happy Ganesh Chathurti. May Lord Ganesha Shower his blessings and remove all the obstacles in life and keep you healthy, wealthy and happy.

Hey, it might sound as a silly doubt. But do you grate coconut on the festival day or grate it previous day and store it? And also preparing Vada batter or Dosa Batter ahead? Please let me know. As we follow our traditional rituals as making all of them on the festival day is really cumbersome.
Give some advice. Thank you:)

Hi Sk
Yes I do the grating coconut also the same day. We consider the coconut to be fresh only if broken on the same day otherwise it is stale. I prepare vada batter too same day. Yes as you mentioned I used to feel all these very difficult in the beginning but now i got used to it. For vinayaka chavithi I even make the rice flour for chalimidi, grate jaggery, make poornam all on the same day. I make the kudumulu rava or rice flour for modak one day ahead. During vinayaka chavithi I perform the puja during Abhijit muhurtham which is usually in the noon around 12 to 1. So I get ample amount of time to finish preparing all the naivedyams. I usually do not make anything that takes a lot of time. I make vada in the shape of bonda as they are quick to make and get fried faster. Deciding on a menu that comprises of many quick and only one or 2 time taking dishes will be helpful. I usually go with 9 naivedyams – panakam, chalimidi and vadapappu are just too easy, seasoned chana, pulihora, payasam are also easy. Similarly I choose one difficult one and the rest easy ones. Hope this helps.

Thank you so much Swasthi for such a detailed reply. It will be really of great help. Cleared all my doubts. Thank you so much again. I am going to follow all the recipes from your site this time. Will share you the update 🙂
In advance, Happy Vinayaka Chavathi to you and your family.

Welcome SK,
Thanks a lot for the wishes. Yes do try them.

i love your recipes those are too good and delicious. vinaya chathurthi menus are release my tention tkuu…”happy vinayagar chathurthi” to you

Thanks Nanthiniram
Wish you all too a very happy vinayagar chaturthi
🙂

Very interested menu to our Ganesh ji
Thank you for giving the recipes
to follw us
With Vinayaka Chavith wishes
Babu Haranadha Prasad, Morla

Welcome Prasad MBH
Thank you.
Vinayaka chavithi wishes to you all as well

I just recently discovered your blog and am sharing in in my google+ account. Lovely recipes for the mouth and healthy too!! Love it! I love that you mix south and north Indian too. Much love from Canada <3!

Hi Sunethra
Glad to know you. Thanks for the share and love
🙂
Have a wonderful weekend.

Hi your receipes look amazing..Do you know where to go in perth to share these foods..better still learn to make them.Angela

Hi Angela
Thank you. No idea where in perth.
since I live in Singapore. Do try them.

Welcome Jenny
so glad to know these are useful. Thanks for the feedback

Hi , i tried 8 recipes from this page for this ganesh chaturthi and they all came out really yummy. Thank you so much for make my ganesha tummy full. God bless you and all the very very best for your coming recipes.

Welcome Prashanti,
I am so glad to know that you made so many dishes for the festival and they turned out good too. Thanks a ton for the wishes.

Valuable information on this festival season will surely help us
Delicious collection of easy naivedhyam recipes!
Thank you Swasthi.

Welcome Raju garu,
I am glad these will help. Thank you

HAPPY VINAYAKA CHATURTHI TO ALL OF YOU , I WANT HIM TO SOLVE THE PROBLEMS OF ALL PEOPLE IN THE EARTH.

We too wish you a very Happy Ganesh Chaturthi.
Thank you

Super!! Perfect collection of recipes put together. So easy to choose and refer to. Pics are too good. Thank u 🙂 happy ganesh chaturthi!!

Welcome Madhavi,
Wish you too a very happy Ganesh Chaturthi.
Thank you

thank u for ur valuable information.this wil surely help.good job.keep it up.

I like the props and clicks they are perfect and beautiful

Great collection swasthi dear..thanks for this