Shahi paneer recipe – Delicious, rich & creamy restaurant style shahi paneer. Shahi dishes originated in the royal kitchens of the Mughals and were meat based. Shahi paneer is popular in the Indian restaurants & is made in several ways. Similar to the other mughlai foods, this shahi paneer is prepared with nuts, onions, spices & yogurt or cream.

The use of yogurt or curd elevates the taste of the gravy with the aroma of spices infused.

Many sources mention that mughlai foods were made rich with the use of nuts, saffron & curd. Tomatoes were not used as they did not exist in India during the mughal reign.

Restaurants serve shahi paneer made in different styles, some even use tomatoes. The recipe shared here does not use tomatoes but I have included tips in the recipe card if you prefer to use it.

Using both yogurt & tomatoes makes the gravy very tangy which can be balanced with the addition of extra cream.

To make shahi paneer recipe, most restaurants serving mughlai foods use kewra water for the aroma. Without that one may not feel the dish so special.

Though kewra water doesn’t add any taste to the food, it definitely brings in a great aroma to mughalai foods. But if you don’t like its fragrance just skip it.

1. Fry paneer lightly in 1 tbsp. ghee and set aside to a plate. This is optional. I choose not to fry.

2. For making the shahi paste, onions and nuts can be blanched or sauteed in ghee. Sauteing brings out the aroma of the nuts and mild sweetness from onions. So i prefer to saute than to blanch. Heat a kadai with 1 tbsps. Ghee. Add green cardamom, cashews, almonds, and fry till they turn slightly golden.

3. Add onions, green chili and fry till translucent. I forgot to add green chili. Take these to a wide plate and cool.

4. Transfer them to a jar with very little water.

How to make shahi paneer

6. Heat the same pan or kadai with rest of the ghee or oil. Fry cinnamon & cloves for a min. Do not skip the spices since we do not use much of garam masala powder in this recipe. These tempering spices add flavor to the gravy. I have also added the optional ingredients small bay leaf and shahi jeera. Add ginger garlic paste and fry till the raw smell disappears.

8. Beat the curd to smooth with a fork. Lower the flame and add it to the pan.

9. Cook until it leaves the sides of the pan.

10. Add ½ to ¾ cup water,add saffron strands. stir and begin to cook till curry thickens. By then you can see traces of oil over the gravy.

11. Add cubed paneer and cook for 3 minutes. If you have already sauteed the paneer in ghee, then switch off the stove immediately after adding paneer to gravy. You can also add deseeded slit green chili now for that distinct flavor. Sprinkle kewra water & cream if using. Give a good stir.

Transfer immediately to a serving bowl else paneer can turn rubbery if left in the hot pan for longer.
Shahi paneer is ready. Garnish with cream.

Shahi paneer is best served with plain Basmati rice, Roti, Naan or even with flavored rice dishes like Jeera rice or Ghee rice. How to make shahi paneer

Authentic mughalai recipes do not use tomatoes. However they are used in some restaurants.  If you wish to use tomatoes, add chopped tomatoes to the pan after cooking onions and cook everything till tomatoes turn completely mushy. Ensure your yogurt is not sour, if you are using tomatoes. 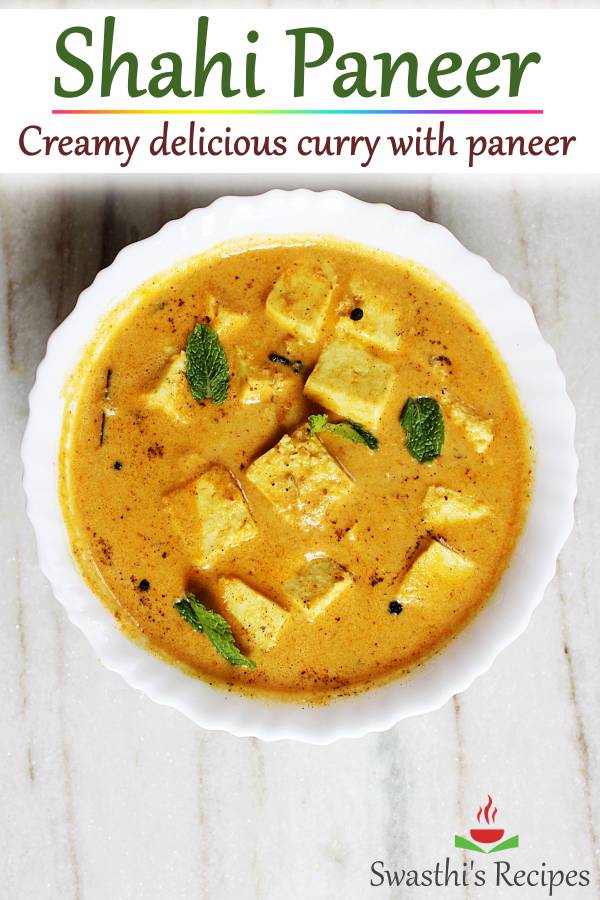