Soya keema curry recipe – one of the delicious soya keema recipe. Soya meat also called as Vegetable textured protein is available in various forms like granules, chunks and even flour too.

It is a good source of protein for the vegetarians and is widely used in Indian cuisine for making soya chunks biryani, soya chunks stir fry, meal maker fried rice and soya chunks gravy curry too.

When you have a crowd for a meal, this could be one of the easiest and good tasting curry that one could prepare. It can be served with rice, roti, bread or paratha. It also goes well in lunch box. It can be refrigerated and frozen as well. If refrigerated use up within 2 days. 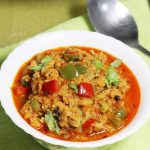 It’s an awesome. Today me and my kids have tried this recipe after watching your video.
Thanks a lot for lovely taste. Also added chopped tomatoes.

I am a beginner when it comes to using soya mince, so was delighted when this curry turned out so tasty, that the whole family enjoyed BUT the amounts in this recipe were very small so I doubled the amount of soya and also increased the amount of all the veggies, which fed us a family of 4 and there was 1 portion left over. That’s not a complaint, it just wouldn’t have fed us all if I’d have stuck to the recipe. Look forward to trying more of your recipes.

Tried this recipe today. Used meat masala instead of garam masala as a variation. It turned out super tasty. It was a real hit at home.

Hi Swasthi..
I totally trust U for all the awesome recipes..
Was wondering can we make this without cauliflower?

Hi Shilpa
Thank you so much! Yes you may want to substitute cauliflower with the same amount of soya otherwise you have to reduce the spices. Hope this helps

Step by step pics are missing

Yes sunny
I will check and update

What is meant by Dry Spices? What does it consist of? It can be replaced with curry leaves, mustard and cumin – is this mustard seeds and cumin seeds?

Hi Ranjiv,
I have updated it clearly now. You can refresh the page and check.

Hi.. at what stage do we blend the chunks to keema.. before putting them in hot water or after finishing that step?

Hi Shweta,
Yes put them in hot water first and let them soften. Then squeeze and rinse them a few times. Repeat squeezing until there is no excess moisture. Then pulse them.

The sandwich was delicious. It was easy to make required very few things yet got an great taste .Thankss for the recipe

Welcome. Glad to know you liked it

Hi shalini, this recipe was actually to make a mouth melting mutton kheema masala curry. i used soya and cauliflower instead of mutton. Thanks for your constant reviews and support. Iam glad to know you liked it.
🙂

This needs to be made very soon by me..looks awesome

looks so spicy and flavourful..

Love the color of the dish. Its true its totally depend on what kinf and how old your masala r.

Gosh, My mouth is watering. I think you know how much I love spicy flavors and these are so obvious in your delish curry. I have a packet of the soy in my fridge and for the weekend, I am going to make this flavorful curry.