Soya keema sandwich recipe with video – Healthy, delicious and protein rich sandwich made with soya keema or soya chunks also known as meal maker, soya nuggets or Textured vegetable protein. I am back after a 6 weeks trip to India. The recipes shared in the past 6 weeks were auto scheduled. Apologies for not replying many comments and queries. I will be clearing them up soon.

This soya keema sandwich is a favorite with kids and adults alike at home. I tried different versions of this before and liked this recipe as it is very simple and light on the tummy. I mostly make this for a weekend brunch or evening snack but can be had even for a breakfast or a meal along with some clear veg soup.

This recipe is kept simple and is even suitable for kids. I have not used tomatoes as it makes the soya keema filling acidic. Yeast bread, soya keema, tomatoes, green chilies and spice powders all together may not go well for many folks especially for kids & those with sensitive stomach.

While assembling the sandwiches, you can also use more fresh raw veggies like grated carrots, lettuce, onions etc or even green chutney or sandwich chutney for better digestion. The day I made these I did not have any of these so could not use them.

I have used sprouted whole meal flour bread, any kind of whole grain bread can be used and avoid white bread. 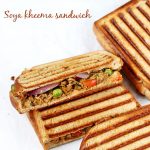