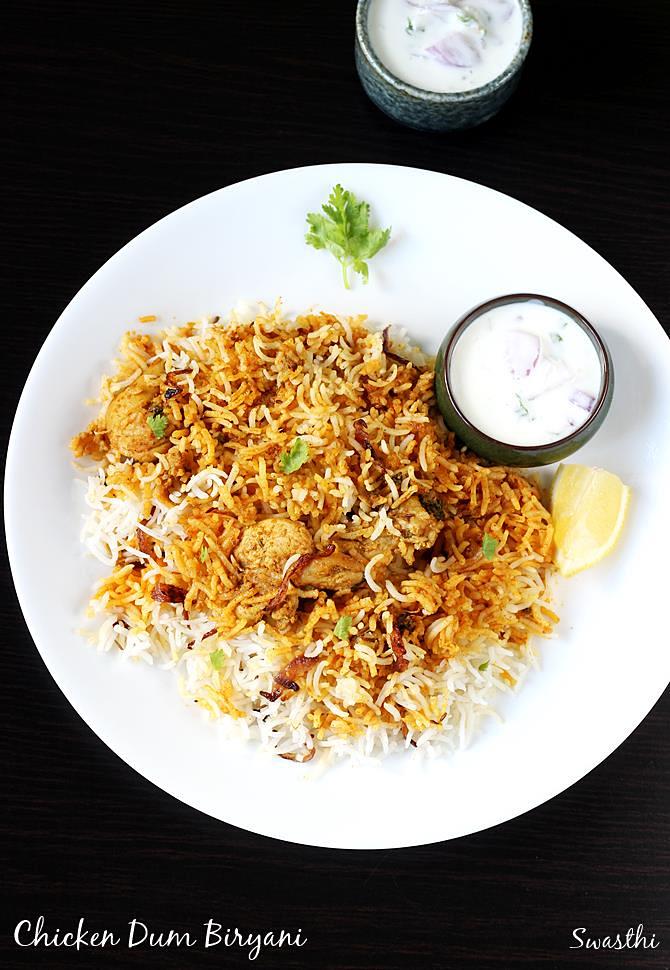 30 Types of biryani – This post on collection of 30 vegetarian and non-vegetarian biriyani recipes will teach you how to make biryani at home. Hyderabadi biryani is one of the most loved rice dishes among Indians. The term “BIRYANI” is derived from the Persian word “BERIAN” meaning fried before cooking.(source:wiki). Traditionally, rice was fried in ghee until aromatic before cooking with meat.

Biryani is dated back to the mughal reign during which Begum Mumtaz Mahal had ordered her chefs to make something special for the undernourished soldiers. The chefs came up with a rice dish which was layered with meat, rice, nuts and spices and was highly nutritious and delicious too.

It was steam cooked in the “DUM PUKHT” method which means “slow cooked” in Persian language. Thus delicious aromatic meat Biryani was born. There are many such stories and this is one among them.

Over the years it has been adapted to suit one’s personal liking or taste. Today we can find so many versions that the authentic way of cooking is almost not found in many recipes and very much they are made using vegetables alone without meat and not even dum cooked.

Across India one can find different kinds of biriyani made in their own regional style but inspired from the mughal cuisine. This is one of the dishes that makes its appearance in weddings, celebrations and parties.

The difference between a pulao and biriyani is that, pulao is made with very few spices while biriyani is made with lot more spices and even spice powders. There is no yogurt used in pulao while most biriyani recipes use yogurt, especially the ones made with meat which also helps to tenderize the chicken or mutton.

The quality of spices, basmati rice and saffron contribute to the unique flavors of the dish. So it is highly recommended to use pure and premium quality spices.

In this post, You can find biryani recipes that are made in different styles along with a few close to the authentic style from the Mughlai cuisine, Hyderabadi and Awadhi cuisnes. Biriyani is usually served with a raita (a yogurt based dish ) or with a shorba / sherva or salan (thick or thin gravy). You can find raita recipes here . I will share non-vegetarian shorba recipes soon.

Veg biryani Restaurant style : A one pot dish similar to the one we get in Indian restaurants. Very very aromatic and delicious dish. One of the top recipes on the blog. Recipe includes making spice powder or masala needed for the dish.

Hyderabadi kachi chicken biryani. This is a super simple recipe made the authentic way by marinating chicken with spices, curd and herbs. Then Dum cooked to perfection to yield fragrant & delicious rice with tender & soft chicken.

Ambur chicken biryani : Tamilnadu style popular rice dish from Ambur. This is prepared using short grain rice called as seerga samba rice or Jeera rice. This is served with Ennai kathrikai and raita. This dish is mostly made with mutton but one can also find the one made with chicken in most Ambur Biriyani centers.

Egg roast biryani recipe : Kerala style egg roast biryani is one of its kinds that is similar to the Kerala street food that is sold as Neichoru / ghee rice topped with egg roast. This is very flavorful with an unique aroma that comes from the blend of kerala spices.

Veg biryani in cooker : Quick one pot dish made with mixed vegetables and rice in pressure cooker. A 30 mins recipe, great for lunch box or quick dinner. It can also be made in a pot. A must try for beginners, students and bachelors.

Awadhi chicken biriyani :Lucknowi style dum biriyani made with chicken. This is popular mostly in north Indian restaurants and is well known for its unique aroma & simplicity.

Malabar or Thalassery chicken biriyani recipe : One of the popular dishes prepared with a premium quality fragrant short grain rice known as Jeerakasala or kaima rice. This dish has originated in the malabar region of kerala. It is served with chamanthi or raita.

Hyderabadi pakki chicken biryani. In this recipe chicken is cooked first with the marinade and then parboiled basmati rice is layered. Then dum cooked for a short time.

Hyderabadi Mutton Biryani : This is another hyderabadi popular recipe made with mutton. This post also explains in detail how to soft cook mutton before layering.

Egg biriyani in cooker : A quick and easy one pot spicy rice made with biriyani spices, herbs and boiled eggs. Makes a great dinner on a week night.

Chicken fry biriyani: Layered chicken biriyani popular in most andhra restaurants in Singapore. It has a unique taste and aroma. If you love spicy and hot andhra foods then you will love this.

Hyderabadi egg biryani Made in dum style and is easy to make even for parties or family get together.

Fish biryani : Did you ever think of making a unbeatable dish using fish? Then this is a must try. The flavor of spiced & fried fish is special in this dish.

Hyderabadi biryani restaurant style chicken biriyani: If you have ever been hooked to the restaurant flavors of Hyderabadi biriyani then you will like this. This can also be made in oven.

Hyderabadi mutton dum biryani : This is made in kachi style, mutton is marinate with spices, herbs and yogurt. Then half cooked rice is layered and dum cooked.

Plain Biryani rice or kuska One pot dish made with basic spices and no veggies are used. This is usually served in some restaurants in a thali or a meal. It is served with a gravy dish & raita.

Muslim biryani : A one pot dish, can be made using chicken or mutton. This tastes similar to the one that is served in south Indian muslim weddings mostly in Tamil nadu and Andhra pradesh.

Soya chunks Biryani : If you trying to be on a vegetarian diet, but missing your meat. You can try this meal maker one pot rice dish.

Paneer Biryani: Made in hyderabadi style dum cooked marinated paneer and rice. Kids’ friendly and can be made for parties as well.

Tomato biryani : One pot simple biriyani made in pot or pressure cooker along with some veggies. This goes great in lunch boxes and for quick dinner even on week nights.

Potato biryani Dum style & made with aloo. This can also be made with baby potatoes.

Paneer dum biryani recipe : This is one of the oldest recipes on the blog. Made in hyderabadi style this paneer biryani is surely going to impress your guests. One of the best vegetarian biriyani anyone can make.

Mushroom Biryani recipe made in pot or cooker. Very flavorful and quick to make for lunch box or even dinner.

Hello sir…
I have read many receipes on ur website…
Thank u for sharing…
I just want to ask that the above receipts have been published in form of book or video by ur website…
Can I get a link.???
Thanks….

Hi Swathi.
This is Sandhya.
I love your recipe of mushroom dum biryani.
Now iam unable to find it in your page.
Have you removed the recipe?

Hi Sandhya
You can find the recipe of mushroom dum biryani here. i will link it back here. Thank you

Mam, love all your recipes.. anytime I want to try something new I search here first…
This is the first time am not finding something am looking for.. Mutton Kheema Biryani..
Would be great to see your recipe for it..

Great recipes.. thank you for making my kitchen a better place :).. God bless you!

Welcome Krishna,
Thanks for following the blog. Very glad to know the recipes are useful. I will surely share Mutton kheema biryani after Dusshera. Thanks a lot for the wishes. Have a nice weekend!

Swasthi’s recipes are very reliable and I always look up swathi’s for any menu I want to make. Her recipe has a very systematic layout and the pictures simply add to the ease of looking up and preparing at the same time. I think the pictures are the most useful part for me,sometimes when you make the dish again, all you may want to do would be to look only at the pictures.
I have tried the biriyaani, idli and dosa items and also the oats items a couple of times and I really like the flavors. Thank you so much for all the recipes.
Please keep it up and many more recipes coming! Looking forward.

Hi JMO
Very happy reading your comment. Thanks a ton for trying out the recipes and writing back here. Really appreciate your wonderful feedback.
Yes will surely keep posting
🙂

All the best of food verynice .
I am one cook

Very nice easy and helpful recipies for all foodies

Thanks for sharing those wonderful recipes. Hope to see and try many more. Thank you God bless you for sharing

Welcome Mr. Joe
Thanks a lot for the wishes

Awesome collection of recipes of different cuisine..hats off i really love surfing your site

Thanks Sahneen hussain
Glad to know you like the site.

Thank you so much for the great recipies