Fish biryani recipe – A simple Hyderabadi style fish dum biryani with step by step pictures. Fish biryani is a layered rice dish made with fish, basmati rice, spices & herbs. Biryani is most commonly made with chicken or mutton. However I made this biryani with fish few years ago for a weekend dinner & was surprised at how delicious it turned out. Since then I have made it so many times and has always been loved by my people.

I don’t prefer to cook elaborate meals during the weekends so often choose to prepare something quick yet delicious. This fish biryani is one of those that fits my choice.

Like chicken or mutton, fish doesn’t need much resting time after the marination. All the steps just go sequentially without any waiting time, plus the fish gets cooked quickly. So it an express recipe that just takes about 45 minutes.

Well to make this fish dum biryani recipe, you don’t need to be an expert in cooking. Even beginners can try it as it is super easy to make.

For this fish biryani, rice should be just done and you should be able to feel the bite when you eat it. It gives a perfect biriyani grain after the dum.

You can also cook the rice with half tsp shahi jeera, few cardamoms, bay leaf. But they are not really needed since strong flavors and spices don’t go well in a fish biryani otherwise the flavor of fish is lost.

2. While the rice soaks, make a paste of the marination ingredients. Taste it to check the salt and spice levels. Set aside. Wash fish with salt. To remove fishy smell, you can also use vinegar to wash.

Drain water completely. Marinate and set aside till the rice gets cooked. Also slice the onions thinly and separate the layers.

When the rice is done, drain it off to a colander.

How to make fish biryani recipe

3. Heat a pan with one tbsp oil, add the fish and fry on both the sides till the fish gets cooked well. By then the masala also gets roasted well. This takes around 7 to 9 minutes depending on the thickness and the type of fish used.

Take care not to burn the fish or masala. Set this aside along with any oil or stock left in the pan. You can use a well seasoned cast iron or iron tawa to fry fish. A non stick may get scratches while flipping.

4. If you like to use cashews, you can fry them now and set aside. Add the rest of the oil and fry onions. Keep stirring often to fry them evenly.

5. We need to brown them lightly. Not completely browned as they get fried further. Set aside few onions for garnishing.

6. Move the onions aside. Add spices and saute them till they begin to sizzle.

7. Add ginger garlic paste, take care not to burn it as the pan is very hot. I switched off the stove for a while when i fried it. Make sure the raw smell of ginger garlic disappears.

8. This time I have not used tomato, but if you like to use, add it now and saute until it turns mushy completely. Add the spice powders, salt and give a quick stir. I switched on the stove after this step. I used biryani masala and coriander powder as well, since the biryani powder alone was strong.

10. Cook on a medium flame till the mixture thickens. Set this aside when it is done, do not leave it on the stove as the gravy gets cooked further and the quantity reduces. If you like to add fish and coat it in the masala you can do it.

But it makes the fish quite moist and dunked in gravy. We prefer fish with gravy on one side and roasted masala on the other side. So i do not add them now.

11. This step is optional. While the mixture cooks, heat milk and add saffron. Set this aside.

12. Layer 1/2 of the cooked rice in a heavy bottom pot. I used the same pot which i used to cook rice. Do not use a wide pot for dum process since the quantity is less.

13. Next layer the gravy and then sprinkle some mint and coriander leaves.

15. Lastly layer the left over rice again. Layer fried onions, mint and coriander leaves and pour the saffron milk. If you like to add fried nuts you can. Sprinkle kewra water.

16. Cover it with a tight lid or foil. The day i made this dum biryani, i did not have foil. so just went ahead with a lid. As such a dum fish biryani doesn’t generate much steam to trap like a chicken or mutton biryani.

So it is just fine to go ahead with a well placed lid or a moist cloth with a lid.

Heat a pan or tawa until hot, place the biryani pot on the tawa and cook on a high flame for 2 minutes and then on a very low flame for just 10 minutes. Allow it to rest for about 15 minutes, before you serve.

For the dum process, any heavy bottom iron pan or steel pan can be used.

To make this fish biryani recipe, i used 2 large fish pieces that weighed above 220 grams each. You can use small ones too or even a fillet can be used. If using small ones, you may need to increase slightly the quantity of ingredients for marinade. Take care not to use too much masala or ginger garlic paste since it may make the fish bitter.

You can serve fish biryani with a raita or shorba. 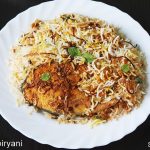 how to make onion raita for biryani 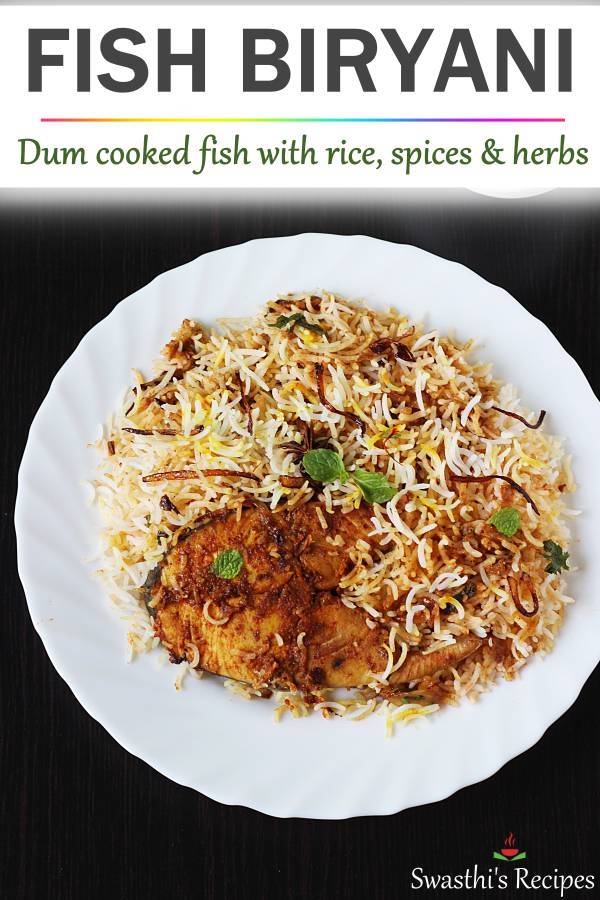