Navratan korma recipe – A creamy, delicious and rich korma made with 9 variety of gems – i.e veggies, fruits and nuts. Navratan literally means 9 gems and korma is a creamy nutty curry. Navratan korma is commonly found on the Indian restaurant menus. It makes a great side dish to include for parties or when we have guests home. It has a unique blend of many flavors, taste and texture.

I have used potatoes, cauliflower, carrots, peas, beans, paneer, cashews, almonds and pomegranate. The most common additions one can find in the restaurants is pineapple and raisins which I have not used.

Pineapple chunks lend a fruity flavor to the navratan korma so it can be used based on personal choice. Since there is milk cream in this recipe, I have not used fruit. But just garnished with pomegranate.

I have made this many times and is good when you prefer restaurant style Mughlai food. This recipe has roughly been adapted from Vahchef. 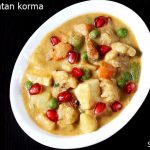 1. Bring 2 to 3 cups water to a boil in a large pot and add cubed onions and cashews.

2. Cook for 2 to 3 mins until the onions look half cooked. Transfer them to a colander with a slotted spoon. Set aside to cool.

4. After 2 to 3 mins, transfer them to the colander. Rinse them well under running water.

5. Using fresh water, steam potatoes and beans first until half done, then add carrots, peas and cauliflower. Steam until just done. They should not turn mushy.

6. Add the cooled onions and cashews to a blender along with chilli.

7. Make a fine paste of this without adding water.

8. Saute paneer for 1 to 2 mins. Set them aside. This is an optional step. You can also fry the nuts and raisins in the same pan and set aside.

How to make navratan korma

10. Saute ginger garlic paste until the raw smell goes off.

12. Fry until the paste begins to leave the sides of the pan. Add only a pinch of turmeric, garam masala, coriander powder, jeera powder and red chilli powder. Usually no red chilli powder is added to this recipe and the heat comes from green chilies. But i like to add a bit of it.

13. Saute until the paste begins to leave the oil. Add salt, you can also add it in the earlier step.

14. Pour water to bring it to a consistency.

16. Reduce the flame to low, add cream and stir.

18. Cover and cook on a very low heat just for 1 to 2 mins. Over cooking can make paneer hard. If you have fried paneer at step 8, i suggest only adding it to the hot korma and cover. Do not cook further.

19. Off the stove and add coriander leaves. If using pineapples, you can add them now.

Transfer navratan korma to a serving bowl and garnish with pomegranate. You can also garnish with roasted cashews and raisins. 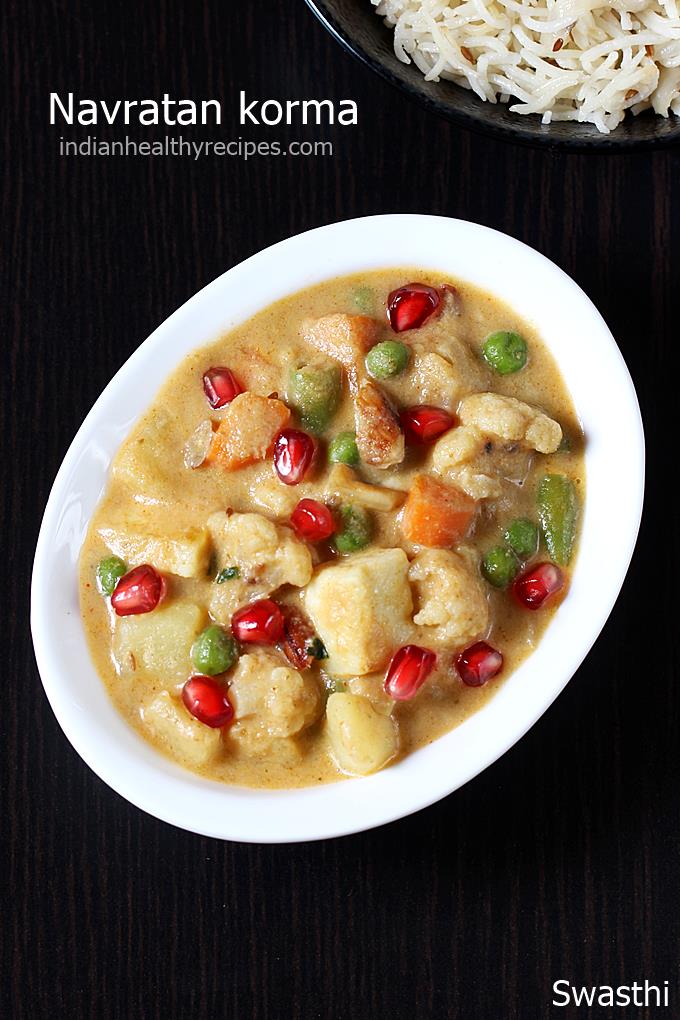