Prawn biryani is simply another variation made on the same lines just by replacing chicken & mutton with prawns or shrimps. Since the cook time for prawns is lesser the way I dum cook them in a biryani is different.

This prawn biryani recipe is the way I make for the foodies at home. It is much simpler to make than any other biryani varieties.

A simple salan or gravy, a raita or a bowl of fresh veggie salad goes well with this biryani. To keep the recipe simple, I have not used saffron, milk or even fried onions. So feel free to use all of them if you like the flavors of saffron & fried onions.

I have made this prawn biryani using fresh black tiger prawns. Any variety of fresh or frozen prawns or shrimps can be used.

If you are using frozen prawns or one that is not very fresh, i suggest soaking them in vinegar for a while and rinsing. To prepare the gravy i used little coconut milk. Packed or fresh homemade coconut milk can be used.

I do not like to use yogurt for prawn biryani, hence i have used coconut milk. Using coconut milk for sea food lends a good taste and flavor. This prawn biryani recipe works good with yogurt as well. 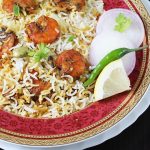 2. Marinate and rub them gently for a while with the marinade. Set aside for at least 30 minutes. You can also do this the previous night and refrigerate.

3. Wash and soak rice for about 30 minutes. Drain off completely. Bring 3 to 4 cups of water to a boil with salt, a bay leaf, 4 green cardamoms, 1/2 tsp shahi jeera. Add rice to the pot and cook until fully done but al dente. It should remain grainy, firm and not mushy.

This shrimp biryani needs a little more oil than the other non-veg biryani recipes since prawns do not release much fats when cooked. Stick on to the quantity mentioned in the recipe else biryani may turn dry.

5. When they begin to splutter, add sliced onions. Separate the layers of onions before adding. Fry until brown or golden.

6. Browned onions lend a good flavor, so don’t skip this. You can set aside a few for garnishing. Add ginger garlic paste and saute till the raw smell goes off.

9. Cook until the oil begins to separate.

13. Let the flame remain low. Pour slightly thick coconut milk and stir. If you do not follow any food combining rules of compatibility you can use yogurt/curd as well instead of coconut milk.

14. Cook until the gravy thickens & prawns are cooked through. Prawns take just 3 minutes to cook. They curl up to C shape when cooked through. Off the stove and set the pan aside. The color of the gravy is dark due to the brown onions.

15. Grease a pot for dum process / slow steam process. Layer half of the rice.

17. Layer the rice. You can add 1/4 cup rice to the pan (used for cooking prawns), stir and add back the rice to the biryani pot. This makes the top layer colorful and flavorful without the use of saffron. Add coriander and mint leaves.

18. Cover with a foil or tight lid. Heat a griddle or tawa until hot enough. Place the biryani pot on the hot griddle / pan or tawa and dum / slow cook for 15 to 20 minutes on a very low flame.

Dum is a slow cooking method where steam is trapped in a pot by sealing the rim to prevent the steam from escaping. The food gets cooked due to trapped steam which makes the food flavorful and delicious.

Allow it to rest for at least 15 minutes after the dum. 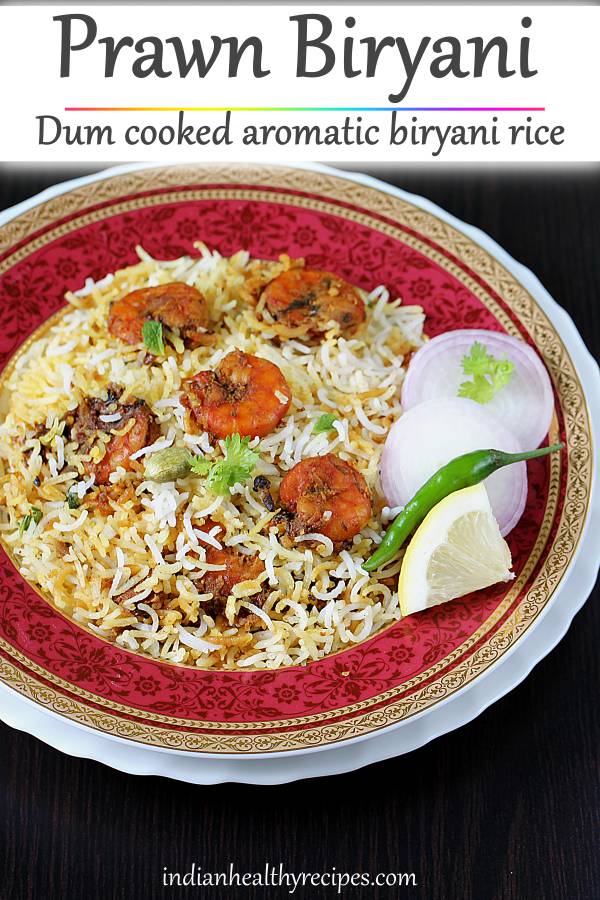