Aloo dum biryani recipe cooked in the hyderabadi style. Potato biryani is a flavorful & delicious dum cooked dish made with basmati rice, spices, potatoes & herbs. Most commonly biryani is made with either chicken or mutton and is a favorite among many. This aloo biryani is amazingly delicious and will be loved if you are a vegetarian.

There are so many different kinds of vegetarian biryanis but this one is rich in taste with a great aroma of spices. The potatoes absorb all the flavors of the marinade and taste much delicious than the regular mixed veggies like carrot, beans and peas.

Traditionally dum biryani was made in clay pots and sealed with dough. Then the biryani was dum cooked on a low flame trapping the steam. This step locks in all the flavors of the spices, herbs and the marinade. Any dum cooked biryani turns our very flavorful & delicious be it vegetarian or meat based.

1. Saute potatoes in 3 tbsp ghee on a medium to low flame. The potatoes must be almost cooked, else they remain uncooked in the aloo biryani. In the same pan, fry the onion slices to make fried onions. On a medium heat fry the onions until they turn golden to brown in color. Then remove them to a plate.

2. Add curd, chili powder, ginger garlic paste, salt and biryani masala to a mixing bowl. Mix and check if there is enough salt and spice. Then add fried potatoes and fried onions. Mix well. Set aside at least for 30 mins to one hour.

3. Wash and soak rice for at least 30 mins. Drain them. Bring 4 cups of water to a boil, add in the spices (for rice), 1 tsp oil, salt and soaked basmati rice.

4. Cook till the rice is 90% cooked and drain away excess water to a colander.

How to make aloo biryani

7. If needed can sprinkle water little by little to cook the potatoes. Do not cook the potatoes till mushy. Check if the potato is cooked fully by piercing a sharp tipped knife. Thick gravy should be left at the end of this step. Simmer the flame.

8. Top the potato gravy with coriander and mint leaves.
9. Spread a layer of rice evenly.

9. Sprinkle the fried onions, coriander leaves and mint leaves.
10. Pour the saffron milk evenly all over.

11. Close the lid of the pan or clay pot, making sure the lid is airtight, so that the steam doesn’t escape.

12. Place this pan/ pot on a hot flat tawa. I used an old dosa tawa. Cook for 10 to 12 mins on a very low flame. This helps in preventing the biryani from getting burnt beneath.

13. Once the flame is off. Set the pot aside without opening the lid for 15 mins and then serve.
Serve aloo dum biryani with raita. 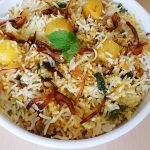 Easy aloo biryani or potato biryani made in simple dum style. Biryani is a layered rice and meat dish cooked on a slow process. This aloo biryani is made with potatoes instead of meat. This recipe yields a delicious and aromatic potato biryani.
Pin Recipe Print Recipe 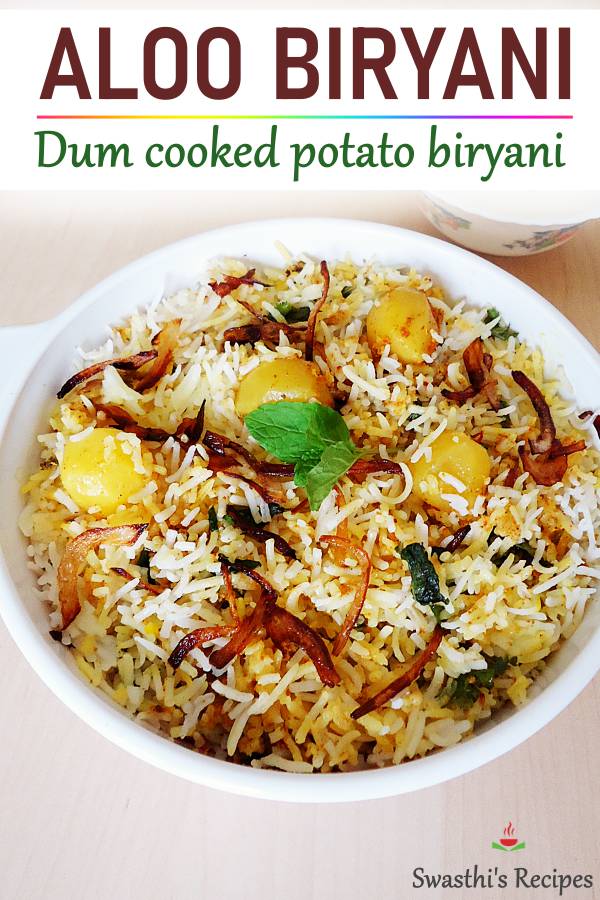