Mushroom biryani recipe – learn how to make mushroom biryani with step by step photos. Recipe includes instructions for regular pot, traditional cooker & instant pot. Mushroom biryani is a delicious one pot dish made with rice, mushrooms, masala powder & herbs. Traditionally a biryani is made with meat, marinated in yogurt and then layered with parboiled basmati rice & herbs. It is then dum cooked to trap the steam.

Since this is a vegetarian biryani it can be made following this simple one pot method. Mushrooms are called as putta godugulu in telugu, kalaan or kalan in tamil and khumb in hindi. It is not a common veggie in the Indian cuisine.

Mushrooms are a powerhouse of nutrition, have high anti oxidants, many other nutrients and are said to increase immunity. They can be added to everyday vegetables to prepare curry, stir fry, fried rice, pulao and even in a flavorful biryani.

Though we don’t like mushrooms much, I prepare them sometimes at least to get the health benefits they provide.

I have also mentioned how to make instant biryani masala powder that you can prepare in just 2 minutes. If you do not have the whole spices then you can even use a ready made garam masala powder.

I have 2 videos on this recipe. Here is the one for Mushroom biryani in pot.

1. Soak 2 cups basmati rice in a large bowl for 30 mins. After 30 mins drain the water from the rice. I prefer to make and use fresh spice powder. If you have ready made garam masala or biryani masala you can also use that. But this mushroom biryani gets it real taste and aroma from the masala powder that is used. So make sure you use a good one. These are the spices I have used. Be careful not to use more as it can make your biryani bitter.

2. Make a fine powder of the above ingredients. I also sieve the powder. Coarse spices can be added to your tea.

How to make mushroom biryani

3. Heat a pot or cooker with 2 tablespoons oil or ghee. When it turns hot, add the following whole spices the whole spices. If you do not have some of them just skip.

5. Spread the onions and saute until they turn golden. Then add 1 to 1½ tablespoon ginger garlic paste.

6. Next saute the ginger garlic for 1 to 2 mins until it turns aromatic. Then add ½ cup chopped tomatoes, ½ teaspoon salt and 1/8 teaspoon turmeric. Saute everything until tomatoes breakdown and become soft. While the tomatoes cook, rinse and slice the mushrooms.

13. Mix well and check salt by tasting the water. If needed add more. I forgot to add mint in the earlier step so I added here.

14. Cover and cook on a medium low flame until the rice if fully done.

15. When the rice is completely done, add some chopped coriander leaves.

Troubleshooting tip: Once the water is all absorbed, you can check if the rice is done correctly. If not then pour little hot boiling water & give a stir. Cook covered.

This biryani can be served with Raita and some papads on the side. You can also pack this in the office or school lunch box.

You can follow this mushroom biryani recipe and make it in a pot, traditional cooker or even in instant pot. I have included the instructions for all.

Biryani is one of our favorite foods at home, so I make it often. You may also like to check these biryani recipes. 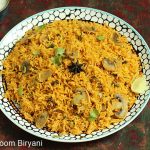 Mushroom biryani is a one pot flavorful rice dish made with rice, biryani spices, mushrooms & herbs. This mushroom biryani turns out so flavorful & delicious that you don't need any side dish other than a simple raita. Instructions included for stovetop & Instant pot.
Pin Recipe Print Recipe

To powder (or 1½ tsp biryani masala or garam masala)

How to make mushroom biryani

Instant pot mushroom biryani video. In the video I have halved the recipe and made with 1 cup rice.

You can halve the recipe. The unique aroma in this mushroom biryani comes from the spice powder that’s mentioned in the recipe. However you can use any other biryani or garam masala. 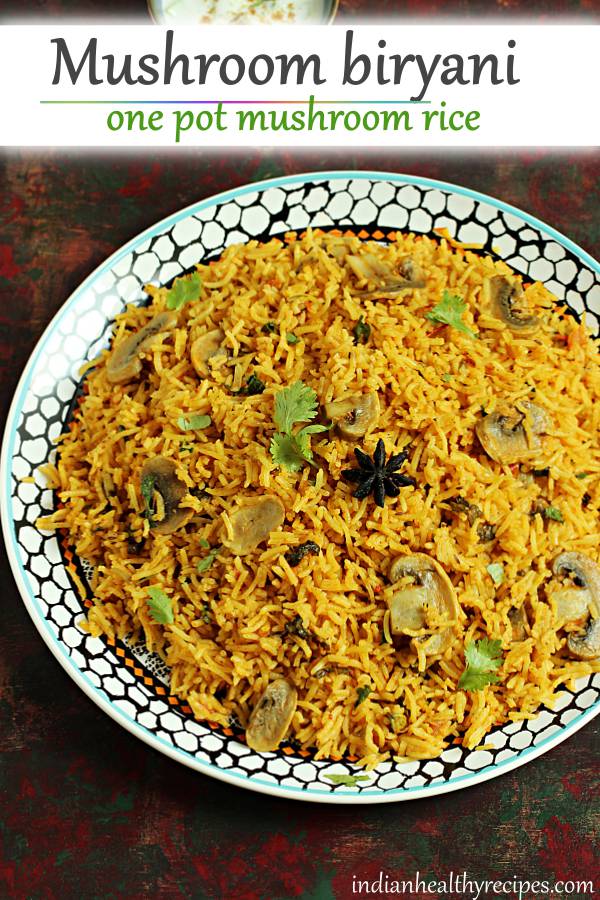