In any meat biryani recipe, the very purpose of using curd is to tenderize the meat. In vegetarian biryani recipes one can avoid using curd and use lemon juice just before serving to get the mild tang.

This soya keema biryani just happened on a day when we were longing to eat a spicy biryani without meat. It turned out delicious with all the flavors of a meat biryani since I used meat masala along with garam masala. However you can just skip using meat masala if you do not have it and use only biryani masala powder.

I have used matar / green peas in this recipe and they add a mild sweet flavor to the biryani. You can also skip them if you do not have and can add a handful of cashews to add some richness.

Many readers ask me what kind of soya I use in my recipes, so sharing a pic of what I use. I use organic soya granules from Bob’s Red mill, however you can also use soya nuggets or chunks to make the recipe. Soak them in boiling water for sometime. Rinse and squeeze off the frothy liquid. Repeat rinsing and squeezing. Pulse a few times in the mixer to get soya keema.

You can find more soya chunks or granules recipes here 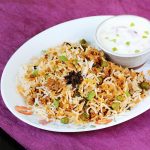 For the biryani gravy

Can you suggest any ingredient other than coconut milk or curd

Hi Nisha,
You can blend 10 to 12 cashews with half cup water and use.

I tried it today…..it was awesome same like mutton biryani.Thanku we love your recipes

Welcome Sarayu
happy to know the biryani turned out good.
thanks a lot

As I promised u, for posting my comments. Here I’m.

The taste of this biryani is very nice. I prepared this all my friends liked it.

Welcome Jayshree
So glad to see you back here sharing the outcome.
Thanks for trying
🙂

I’m gng to try this recipe soon & will know u the comment.

Hi Jayshree
You are welcome to share the outcome

Look so delicious recipe. Will try this soon.