The coconut milk adds a unique and rich aroma to the dish. Since there is no usage of onions in the dish you will save some time taken to fry the onions. I have made this in a pressure cooker, how ever you can also make it in a electric cooker, insta pot or just a regular pot.

This simple rice does not call for a accompanying dish but can be served with any veg or non veg curry gravy. It is nutritious, healthy and delicious too. Using a moderate amount of spices in the seasoning makes the rice aromatic.

For an increased intake of protein you can include soya chunks or nuggets also called as meal maker. I have used freshly chopped veggies, you can replace with frozen chopped veggies available in the frozen sections of supermarkets.

1. You can skip this step if not using soya chunks. Soak soya chunks in hot water till they soften for about 10 minutes. Rinse in lot of cold water, squeeze off the excess water. You get foamy water when you squeeze. Repeat the rinse with cold water. Never proceed to cook soya chunks without following this step, as there is lot of dust and debris that gets on to these chunks when they are sun dried or dehydrated during the process of manufacturing.Make sure no water is left in the chunks. cut each chunk to 2 pieces if they are big, set aside.

2. Wash rice and soak for at least 20 minutes. Drain off and set aside.

3. Powder saunf and pepper. Set this aside. If you don’t have a blender, just use a hand pestle and crush them, but to a fine or slightly coarse powder.

4. If you like to garnish the pulao with fried cashews, fry them till golden and set aside. I like to use it along with the veggies since they taste good when cooked in the spices.

5. Add ghee or oil to a hot pan and fry all the spices till they begin to sizzle.

6. If you prefer to use onions. You can add them now and fry until golden. I did not use onions, just to cut down the time.

7. Add ginger paste, fry until the raw smell disappears. Do not burn.

8. Time to add in saunf and pepper powder. Saute quickly. Take care not to burn.

9. Add vegetables and chili. I prefer to add cashews now. Fry them for 2 to 3 minutes. If using soya chunks add them now.

10. Next add chopped mint leaves and fry for another two minutes.

12. Drain the rice completely and add it to the pan.

13. Cook till the coconut milk is almost absorbed. Refer the picture.

14. Lower the flame completely. Cover the pan either with a tight lid or with a pressure cooker lid.

15. Cook until the rice is done. If needed sprinkle some water. If using a pressure cooker, cook for just 5 minutes on a a low flame. Switch off the stove, do not allow the cooker to whistle. Let the pressure come down. Fluff up the mixed veg pulao.

Alternate method – Cover the cooker immediately after adding rice. Then allow the cooker to whistle once on a medium heat.

Garnish coconut milk pulao and serve with a raita or gravy. 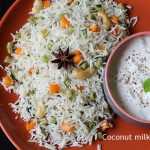 One of the most flavorful and delicious mixed veg pulao. It can be prepared using coconut milk or water. But coconut milk, mint and fennel seeds together yield one of the best vegetable pulao.
Pin Recipe Print Recipe

to powder (optional, but adds a lot of flavor)

If cooking in a pressure cooker

If cooking In a pot,

I always follow your recipe and it tastes amazing. You have a beautiful way of presenting dishes.

Thank you so much Deepthi
Happy to know!
🙂

I love your style of recipies . I follow it always . Thank you so much

Tried and it tasted really yummmy .. thank you for great recipes

Hii
Can i skip the veggies in this recipe..and do i have to powder the fennel seeds?

Hi Rizwana,
Yes You can skip the veggies. Fennel powder gives a nice aroma. If you don’t have skip it

I would love to make this recipe in instantpot. Can u suggest the settings and quantity of water to use?

Hi Nilu
I haven’t made this in a instantpot any time. You can just follow the same timing and water as you do for cooking basmati rice.

Hi I tried this recipe coconut milk was broken like milk once it came to boil.

Hi Sampritha,
Using thick coconut milk or canned coconut milk can split. However it should not affect the final outcome unless there are additives in the milk.

I am 17 years old and I am very passionate about cooking. I was very much intrigued by your website ma’am and I must say your recipes are amazing. I did coconut pulao with vegetable kurma as a side and I loved the taste of both of them. I am delighted by the fact that you give us pictures of every instruction which makes it easy to follow the recipe. the instructions and the recipes are simple and easy to cook but taste heavenly.
you are amazing.
I just faced one problem with my execution of pulao recipe. I cooked it using a pressure cooker and I closed the lid for 5 mins as you said. I even removed the pulao before it started whistling but when I opened the cooker the underside was burnt. since I removed the pulao quickly enough there was no burnt flavor. but everytime i cook rice the same thing happens. the underside gets burnt and the rice is not as separate as your picture it becomes quite mushy. how can I prevent it? how can I stop burning the underside and make the rice as good as yours?

Hi Shivaani
Thanks for trying. So glad to know the recipes are useful. Firstly always use aged basmati rice to prevent sticky or mushy rice.
Rinse the rice well 3 times and then soak as mentioned on the pack or as per the recipe. This helps to get rid of excess starch from the rice and makes the rice less sticky.
Regarding this recipe, I guess the rice got burnt because the flame is a bit high. Regulate it to low.
For any one pot rice recipe to get fluffy and non sticky rice follow one of these methods.
After adding the rice to boiling water, close the cooker and just cook for 1 whistle on a medium high flame.
Or cover when there is very little water left and cook on a low to medium heat for 5 mins.
Both with yield you the same results. Hope this helps.

Thanks Neesh so glad to know you made it good. Have a wonderful day

Have tried the recepie and it really came out very tasty:)

Beautiful pulao,who will say no to it..Excellent dish for sunday lunch

i love this cooker version..

simple and aromatic pulao, love to try it…

I love this , Swasthi! Two bowls for me, please!