Peanut pesto pasta recipe – Quick, healthy and delicious spaghetti recipe with cilantro peanut pesto. This is one of the pasta dishes that will be loved by most kids due to the nutty flavor of peanuts along with the fresh cilantro or coriander leaves.

I prefer to stick on to the taste of Indian food, absolutely hot & spicy. Though I do not like to experiment much with foods, at times I do try out new recipes for my kids and hubby.

Just like the masala pasta, wanted to try a spaghetti recipe which has the kick of an Indian desi food but without the use of much spices. During the lookout, I found Martha Stewart’s pasta with Cilantro-Peanut Pesto recipe and I absolutely fell for it, looking at the simplicity.

I tried out a couple of times, just followed the recipe as it is except adding cumin / jeera to give an Indian touch and excluded soya sauce and lemon zest. It is very simple to prepare and barely takes 30 mins.

Iam sure this Spaghetti Recipe in Indian style will be liked by many of us. It can be accompanied with any clear soups or salads. I prefer the vegetable chicken soup or vegetable barley soup or chickpeas soup along with this spaghetti. If you have little kids to relish this, do reduce the chilies.

The freshness and amount of coriander leaves (cilantro) that you use is very important here. If you do not use enough cilantro, it does not taste good and is not flavourful too. If you feel your spaghetti is less flavorful, grind additional leaves and just stir in the spaghetti.

You may like to check these top 10 pasta recipes.

Some of the popular pasta recipes on the blog include Red sauce pasta, White sauce pasta, and vegetable pasta in red sauce. 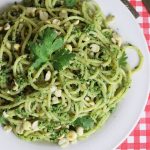