Egg paratha recipe – easy breakfast, brunch or dinner recipe that is protein rich, healthy and tasty. Egg paratha is a kids’ favorite, so i make it often for their after school snack. To make egg paratha, you can use ready paratha, roti or frozen paratha as well. However I have included the recipe to make basic paratha as well in this post. You can also check this detailed post on making plain paratha.

Egg paratha is made in 2 ways. I have shared both of them – 1 in the recipe card and the other in step by step photos.

The first method is popular in the North Indian states where egg mixture is poured inside the half cooked paratha layers. If you are a new cook then I suggest using the second recipe.

This egg paratha can be served plain or with some pudina chutney or with green chutney or masala tea. 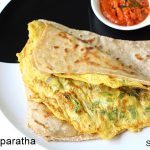 How to make egg paratha

2. Knead it with enough warm water. Add few drops of oil. Knead it again to a soft dough.

3. Smear a few drops of oil to the dough. Cover and set aside for at least 20 minutes.

How to make egg paratha

9. Heat a pan. Place the paratha on it. When you see bubbles over the paratha, flip it.

10. With in few seconds the paratha begins to puff up.

11. Toast on both the sides till brown spots appear. I did not use oil or ghee at this stage since it gets coated with oil at the last step.

12. Transfer the paratha to a plate. Set the pan aside to cool down a bit, a very hot tawa can burn the egg without cooking properly. Prepare the egg mixture. Chop onions, chilies, coriander leaves and add to a bowl. I use capsicum as well. you can also use grated carrots. Break the egg, add salt, pepper and turmeric.

13. Beat the egg mixture until frothy.

14. Add oil to the pan, when it is just hot, pour the egg mixture. Allow it to cook. I cook it on a medium flame till the egg is almost cooked but slightly gooey on top, for the paratha to stick well with the egg. You can use 1 egg for each paratha or 1 egg for 2 parathas.

15. Place the paratha over the egg. Press it gently.

16. Flip it and cook on the other side as well for 1 to 2 minutes to ensure egg is cooked completely on the edges. egg paratha gets coated well with oil now.

Egg paratha doesn’t need any accompaniment. But can be served with any chutney and a vegetable salad.