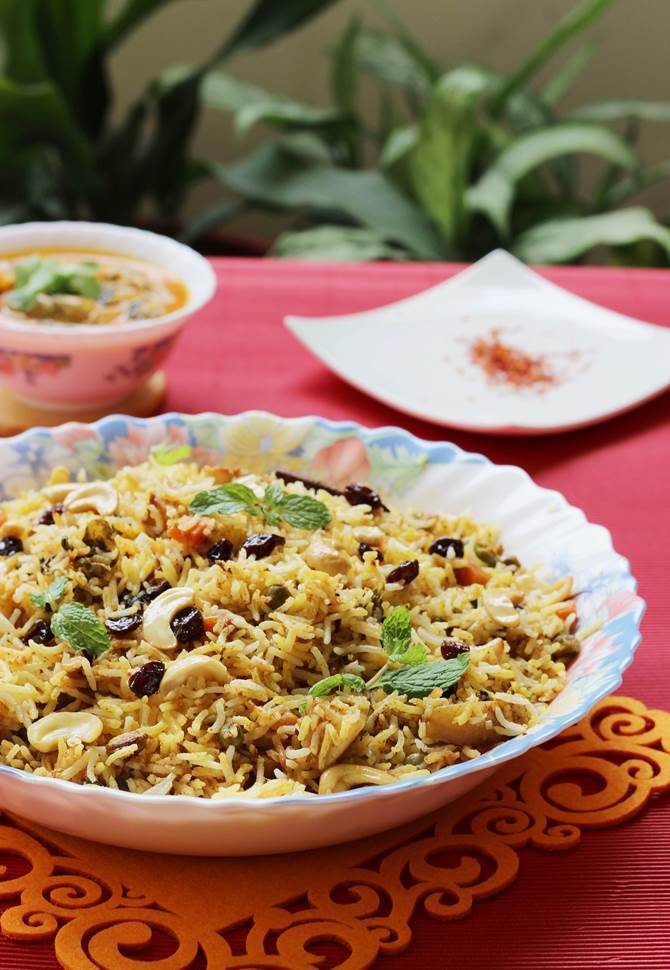 Veg dum biryani recipe – Biryani was brought by the mughals to India during the mughal reign. It became very popular as one of the most nutritious, rich and royal foods. Since the authentic hyderabadi biryani was dum cooked with meat, ghee, nuts and yogurt, it was considered as a nutritious and wholesome dish. There are sources that say “veg biryani” was born during the same time and was prepared by the vegetarian community working for the mughals. There are so many kinds of veg biryani one gets to see on a restaurant menu like kerala biriyani, lucknowi biryani etc.

Hyderabadi vegetable dum biryani is one of the most popular, aromatic and delicious food loved by many. Making a vegetable biryani can be as simple as making it in a pressure cooker or one that is prepared with a fresh ground masala and dum cooked like the one shown in this post.

This vegetable dum biryani recipe is roughly adapted from the hyderabadi vahchef’s video and is one of the best veg biryani that I can ever make.

To make vegetable dum biryani flavorful and delicious use the best quality aged basmati rice, premium quality spices, masala powder and fresh herbs. You can use a store bought masala powder or can make some from my biryani masala powder recipe (link in the recipe card below).

For this veg biryani recipe, veggies like carrots, peas, potato, cauliflower and beans are used. Avoid using veggies like brinjal, mushrooms or capsicums unless you have a personal liking towards them. You can also use soya chunks or meal maker nuggets if you like.

Making a good biryani is a regular affair at home and this collection of 30 biryani recipes shows my love for the home cooked dum biryani. Though the preparation & dum process is a bit time consuming, the results are great.

If you do not prefer to go for a elaborate recipe, You may check this quick restaurant style veg biryani and this super quick veg biryani in presssure cooker.

How to Make Veg Dum Biryani

1. Wash and soak rice for at least 30 mins. While the rice soaks you can go ahead with the next steps.

2. I highly recommend using fried onions for making a good hyderabadi biriyani. The aroma of these fried onions is great and cannot be substituted with any other ingredient and not even with pan fried onions. Thinly slice onions and fry them in hot oil until they turn crisp and golden. Set aside. These are also sold in super markets as fried onions (not onion flakes).

3. You can also shallow fry, this is how you can do it if you like to shallow fry. Heat oil in a pan. Add even & thinly sliced onions. Also separate the layers before adding.

4. Fry them until golden and brown. Do not burn. Keep stirring often to evenly brown them and prevent burning.

5. Set aside half of these. Move the rest of the onions to a side in the pan. Off the stove for a while to prevent burning the spices.

6. Add all the whole spices except shahi jeera. Sauté till you get an aroma. Takes around a min, do not burn. Add shahi jeera and sauté until they crackle.

7. Switch on the stove and lower the flame. Add ginger garlic paste.

8. Saute till the raw smell goes off. Keep stirring.

14. In a large pot, bring 5 cups of water to boil, add oil, salt, shahi jeera and bay leaf. Adjust the salt as needed.

17. Drain off the excess water and set aside. You can soak saffron in 2 tbsp of this hot water or in hot milk. Set aside.

18. Make sure the veggies are cooked al dente. If you like to make a 2 layer biryani, set aside 1/3 of the cooked veggies. If you are using a small pot for dum, then it works good to set aside half, If you use a wide pot, then just go ahead making a single layer.

19. Add the rest of the curd, mint and coriander leaves to the dum pot.

21. Layer half of the rice, If you have set aside half of the curry then layer it now, if you have not set aside then just sprinkle 2 pinches of biryani masala powder. Then sprinkle few fried onions, mint and coriander leaves.

23. I fried cashews in a small pan in hot ghee, then added raisins towards the end. Poured the ghee and then the nuts raisins over the rice evenly. You can also add a tsp of kewara water for mughalai flavors.

24. Begin to heat an old heavy bottom tawa and proceed with the next step.

25. Cover the pan with 2 thick moist kitchen towels or just seal with aluminium foil. Place the lid and a heavy object on the lid. I do not place any heavy object, as my lid itself is very heavy. Or you can make dough made of wheat flour. Moisten the rim of the pan, place this dough around the rim and place the lid over it.

Press the lid tight so that it sticks to the dough tightly and no steam vents out. I do not prefer to do this as this mess up the pan and cleaning is a great pain. Move this pan to the hot tawa, cook on medium flame for 5 mins. Set the flame to low. Cook this way for 5 to 7 mins. Since the vegetables and rice both are already cooked al dente, the biryani rice turns out perfect. Allow it to rest for at least 15 mins.

Veg biryani is ready to serve. You can mix up the entire rice and veggie mixture for even flavoring and spice. You can also serve it without mixing for the marbled look. Just serve from the bottom to the top in portions. Make sure each serving gets a proportionate amount of spiced veggies and rice.

Serving suggestions: Veg biryani can be served with a raita or shorba. You can choose one from these
Collection of raitas or
Collection of biryani gravy. 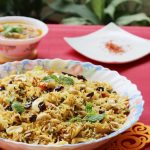 Vegetable biryani recipe in a hyderabadi dum style. It is served as a main course with raita and gravy.
Pin Recipe Print Recipe
Prevent your screen from going dark

How to Make Veg Dum Biryani

For the oven method:

I have used a small pressure cooker that has a heavy bottom in the past. I also use corning ware pots, stain less steel heavy bottom pots. All work good. Use the right size of utensil, do not use a large pan to cook little biriyani. The cooking time during dum can vary slightly depending on the thickness of your utensil. so judge accordingly and cook on dum. A perfect biriyani must not burn at the beneath and not very moist at the bottom

Made this again with your shorba and mirch ka salan recipes. Everything was so balanced. In awe of your insights and so so glad you are sharing these with us.

Glad to know Sandy.
Thank you

Great recipe Thank you for sharing, came out really well.

Glad to know Shwetha
Thanks for leaving a comment

Thank you for this wonderful recipe. The proportions were accurate and the biryani came out fabulous! Everyone loved it!

Welcome Sheily
Glad to know it came out great. Thank you

Made it multiple times and it tastes awesome.

Thanks Mallika
Glad to know it turned out good.
Hope you enjoy the egg biryani

The best veg biryani ever

I love this recipe and easy one to prepare. Simply superb

This tastes just amazing. My family who used to consider only meat biryani as real biryani loved it immensely. Thank you so much.

Hi Avishek,
You are welcome! Glad you all loved it. Thank you!

This receipe is too too yummy.. have tried it multiple times and everytime it treated well. Thank u for this mind-blowing receipe

Hi Shruthi,
You are welcome! Glad you like it. Thank you so much!

Can we add panneer and soya chunks to it ?

Yes You can add about 3/4 cup paneer and half cup dry soya chunks. Add the soya along with veggies and paneer just before layering the rice. You can also fry the paneer and then add.

Can we make rice in presure cooker

Hi, You can check this veg biryani in cooker

Hi, I tried this today for my son s birthday party. It was a super hit. Thanks for the recipe.

Welcome Shreedevi
Glad to know it turned out good.

The biryani recipe is simple and yet so tasty. Thanks for the recipes. If I have to make something Indian I look for your recipes first. Thanks for sharing.

Hi Vamsi
Thanks for trying the recipes. Glad to know the biryani turned out good.

Thank you so much for sharing this recipe! My husband just loves this briyani. I have made it a number of times when I had guests over and they have all loved it too. Everyone asks and I direct them to your website 🙂 The recipe is perfect and just so delicious

I appreciate it so much!

Hi Deval Patel,
You are welcome. Thanks for the comment. Made me very happy.
Thanks again
🙂

Hi Swasthi, thank you for sharing your recipes. This recipe turned out so well, so yummy. All at home loved it. Seek your advice, which veg gravy will go well with this briyani, plan to cook for my friends,.

Welcome Vanitha
Thanks for trying. Glad to know it came out well. You can try this shorba recipe. This soya chunks kurma also will go very well.

Thank you Swasthi, will do, regards Vanitha

Hello. If you wereto double the portions of this recipe would you keep the amount of spices the same or add extra. Also for a vegan alternative would it be ok to use yoghurt made from coconut instead?
thanks

Hi Abbie
You will have to double the spices. I guess it works with coconut yogurt but haven’t tried it anytime. So not sure how it tastes.

Welcome Nandhini
Happy to know you are enjoying biryani. Thanks for writing.

shall I add coconut nut along ginger garlic paste

I have followed your each steps clearly and my family said that it was better than any restaurant, the ingredients quantity mentioned by you is very much accurate.

Thanks Swaswathi, for such a wonderful dish.

Love your recipe and make it often. Thank you!
Just one question. The yogurt curdles when I start mixing it with the veggies. Is there a way that I can prevent it from happening? The final dish tastes great though.

Welcome and thanks Megha
You can try using chilled yogurt, it may prevent.

I have tried making Dum Biryani before but using Chicken. I think they way you have shared the recipe – with all the small things considered – especially adding Shahi Jeera later, the al dente rice, the ghee on top with the saffron milk etc. – a lot of thought has gone into it and if followed to the T – the biryani just cannot go wrong. .

I noticed that you have not used coriander powder while cooking the veggies. Any particular reason??

Hi
I have used biryani masala powder which already has coriander powder in it.