Paneer tikka masala is a delicious, creamy & flavorful dish made by grilling paneer & then adding it to a masala gravy. Paneer refers to Indian cottage cheese, tikka is a small chunk of grilled food and masala here refers to a spiced gravy. So paneer tikka masala literally translates to grilled chunks of Indian cheese in spicy gravy.

Paneer tikka masala is a vegetarian version of the world famous chicken tikka masala. This vegetarian dish is mostly found on the Indian restaurant menus and is served with naan, roti, plain paratha, basmati rice or jeera rice .

The flavor & taste of this dish is unique from the other paneer dishes due to the grilling process.

In restaurants to make paneer tikka masala, paneer is first marinated & grilled in a tandoori oven (or clay oven) which imparts a great smoky flavor.

Then it is added to a delicious spicy onion tomato gravy and garnished with cream.

Since we don’t have such tandoori ovens at home we will have to grill the paneer either in oven or on a griddle.

In this post I have shown both the methods of grilling in the griddle on stove top & in oven. You can also grill it over direct charcoal grill and use.

I have also used half capsicum and half onion to grill along with my tikkas. But that is totally optional. But restaurants do use them as a lend a very good aroma when grilled. 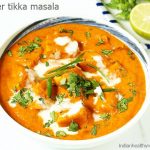 Notes on paneer tikka masala recipe This recipe needs thick curd or greek yogurt. If you do not have thick curd then follow the below step and make it.You can also skip onions and bell peppers for the tikka. But grilled onions and pepper lend a nice flavor.

1. If you prefer to use veggies then follow this step. Cube half onions and separate the layers. Cube half capsicum as well. Make sure the size of onion and capsicum cubes are almost the same as paneer. Set these aside.

If you do not have greek yogurt or hung curd, add 1.5 cups homemade yogurt or curd to a thin muslin or cheese cloth. Squeeze off the excess whey and use. You can also check another method I shared in the recipe card notes above.

I also used 1 tsp lemon juice to add tang as my yogurt was very fresh. Do not use it if your tomatoes or yogurt is even slightly sour.

3. Mix everything well. I forgot to add ginger garlic at step 1 so added it here.

5. Mix everything well. Rest aside in the fridge until the gravy is ready.

6. Add 1 tbsp oil or butter to a pan. Next add onions and fry until transparent or light golden. Then add tomatoes and cashews. Sprinkle sugar, salt and roast all of these until mushy and soft. You can also cover and cook.

7.Then add all the spice powders, turmeric, garam masala and chilli powder.

8.Saute for a few minutes until the raw smell goes away. You will begin to get a nice smell of the masala.

9.Cool this and add to a blender jar. Pour ¾ cup water. To cut down the cooling time, you can also pour ice cold water to the jar and then add the mixture. But ensure the mixture is not hot.

11. Heat 1 tbsp butter or oil in a pan. Optional – You can add any whole spices if you have like – 2 cardamom, 1 small cinnamon piece or even 2 cloves. Saute for 1 to 2 minutes.

Add ginger garlic paste and fry until the raw smell goes off. This step is very important else the smell of garlic may not be good in the dish.

12. Pour the onion tomato puree to the pan. Be careful it will begin to splash out of the pan, you can partially cover and cook. To adjust the color you can add more chilli powder at this stage. I did not use more.

13. Add ½ to ¾ cup water to bring to a desired consistency. Cover and cook.

14. Mix everything well and cook on a low flame until the sauce simmers well and thickens.

15.When the gravy turns thick you will see some oil separating on top. Add kasuri methi (optional). Continue to cook for another minute. Set this aside.

16. Option 1 – For the paneer tikka on tawa, stovetop : Heat 1 tsp oil in a wide tawa on a high flame, place the paneer cubes in the tawa.

17. Flip them to the other side and cook on a high flame till all the marinade dries up and the paneer turn golden. This takes only 2 to 3 mins. Set aside. Do not over fry them, they can turn harder.

18. optional if using veggies – In the same pan, place the veggies and cook till the marinade dries up. The veggies look partially charred. Do not overdo else they lose the crunch.

19. Option 2 – To grill tikka in oven, put them on to skewers alternately paneer, onion and capsicum. Bake in a preheated oven at 220 C for 8 to 10 minutes. you may need to adjust the timing as needed depends on the size of cubes and oven too.

20. You may need to flip the skewer and then grill again if your oven does not have a fan.

21. Add the grilled tikkas in the gravy. Gently mix. Make sure the gravy is thickened before adding paneer.

To give a smoky flavor to the dish try using this dhungar method using charcoal. Please note that it could be dangerous doing on a gas stove. I suggest doing it out of the kitchen, using another source like a large candle. 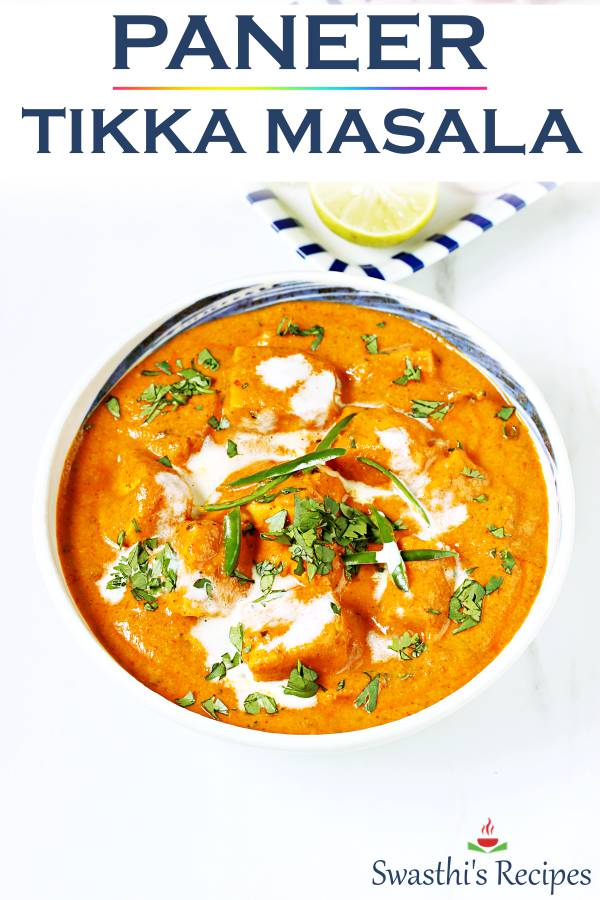