Sabudana vada recipe with video & step by step photos. Sabudana vada is a popular crisp fried snack made with tapioca pearls (sago), roasted peanuts, boiled potatoes and herbs. It is a popular Maharashtrian snack that is eaten not only as a tea time snack but also as a fasting or Upvas/ Vrat food. Sabudana khichdi and sabudana kheer are other foods made during Navratri & Ekadashi fastings.

As per the tradition, many hindus fast during Ekadashi & Navratri. Some people consume only milk, some only fruits, while some consume a single meal per day.

Sabudana is one of the most commonly used ingredient during the fasting days. It is considered as an instant energy booster as they are high in carbs.

During the fasting days, many ingredients like lentils, certain spices, garlic and onions are not consumed. So the fasting foods like this sabudana vada are made without using any of these ingredients.

Since sabudana is a pure starch, peanuts are used here to add some nutrition. Potatoes bind all of these together.

This failproof recipe will give you not only delicious but also crisp sabudana vada. The recipe shared here is the Maharashtrian version and is gluten-free as well vegan.

To make good sabudana vada, always soak the sabudana well until they turn soft. You can roast the peanuts ahead, crush them and store in a jar.

This saves some time on the day you prepare these vadas. Make sure your boiled potatoes are just cooked and not mushy otherwise sabudana vada will soak up lot of oil.

Many people prefer to eat these with yogurt or chutney. These are best served hot & also go well with hot tea.

1. Add half cup sabudana to a wide bowl and rinse them twice. Drain the water and soak them in half cup water for about 4 to 6 hours. When they are soaked they will be soft and get mashed easily.

To check if sabudana is well soaked, take few soaked pearls in between your thumb and forefinger. Press down. They must get mashed well and completely. If it is even little bit hard in the center, then sabudana may burst in oil while frying.

Drain up the water completely. Drain to a colander and set aside. If there is any moisture left in the sabudana the vada will become soggy and will soak up oil.

5. Boil 2 medium potatoes in whatever way you like. You can boil the whole potatoes in a cooker or cube them and boil in a pot. This time I peeled them and cubed to large pieces (1 heaped cup). Covered them with water and boiled until soft.

To check insert a fork and check, it should easily go in. Do not make them mushy. Drain any excess water or evaporate.

8. Mix everything well. If sticky, then just grease your finger lightly. Mixing well helps in binding the dough well and prevents the sabudana vada from breaking while frying.

How to make sabudana vada recipe

10. Grease your palm and flatten the balls gently to give the shape of a vada. If they break towards the edges, you can just stick them back. Place them in a plate or foil.

Do not make them too thick or too thin. The vadas will puff up after frying. Very thick vadas don’t cook inside and very thin vadas may break.

11. Heat oil in a pan until oil turns hot enough. Check by dropping a small portion of the dough to the hot oil. The dough must rise and not sink. This is the right temperature.

Next, take 1 tsp of the dough and shape to a small vada or ball and drop in the hot oil. In case the vada doesn’t break then you can go ahead and fry all of them

If the ball disintegrates in the oil, then add 1 tablespoon flour to the mixture and mix well. If you are fasting then add kuttu ka atta otherwise you can add rice flour. This step is optional only to ensure the vadas don’t get disintegrated in oil.

Shape the mixture to vadas. Gently slide 2 to 3 sabudana vadas to hot oil. Let them fry on a medium heat for a few minutes and firm up. Do not touch them or disturb them until they firm up & become golden. Otherwise they may break. Deep fry them in batches of 2 to 3 on a medium heat.

12. When one side of the vada turns firm and golden then flip them to the other side. Fry until golden & crisp on both the sides. Before you fry the next batch, ensure the oil is moderately hot enough again and not very hot.

1. Soaking sabudana : There are different kinds of sabudana available in the market, some soak up well in just 2 hours while some need 5 to 8 hours of soaking time. Adjust the soaking time as needed until the sabudana turns soft, without any hardness inside.

2. Checking sabudana: After the soaking time, press few sabudana pearls in between your thumb and forefinger. They must get mashed easily. Sabudana if not soaked well can burst in oil. So make sure they are soaked well and not hard from inside.

3. Potatoes : Boiled potatoes help in binding the mixture. So boil them with care without making mushy or soggy. Soggy potatoes often break up the sabudana vada while frying due to excess moisture.

4. Peanuts : Crushed peanuts help in absorbing the excess moisture if any. So I prefer to powder it. However you can just crush them coarsely in a mortar pestle if you prefer crunchy peanuts in the sabudana vada.

How to prevent them from breaking

1. Using flour : Earlier I had never used flour to make my sabudana vada. It is only a optional ingredient. But lately I have made them many times with flour and felt they are less greasy and more crisp with little flour added.

If your vadas break then you can fix it by adding 1 to 2 tbsps of flour to absorb excess moisture. If making the vadas on fasting days, then you can add some kuttu ka atta or rajgira flour.

2. Temperature of oil : Sabudana vada can break while frying if the oil is not hot enough. Always check if the oil is moderately hot enough to fry. Also fry on a medium high flame. Frying them on a very high flame will brown them too quickly. Frying on a low flame will make them oily. 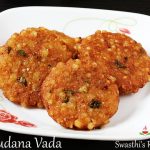 How to make sabudana vada

Notes: Unsoaked sabudana can be hazardous. They can burst in oil if not soaked well. Please ensure they are well soaked before you make the vada.Flour: Using flour is optional but 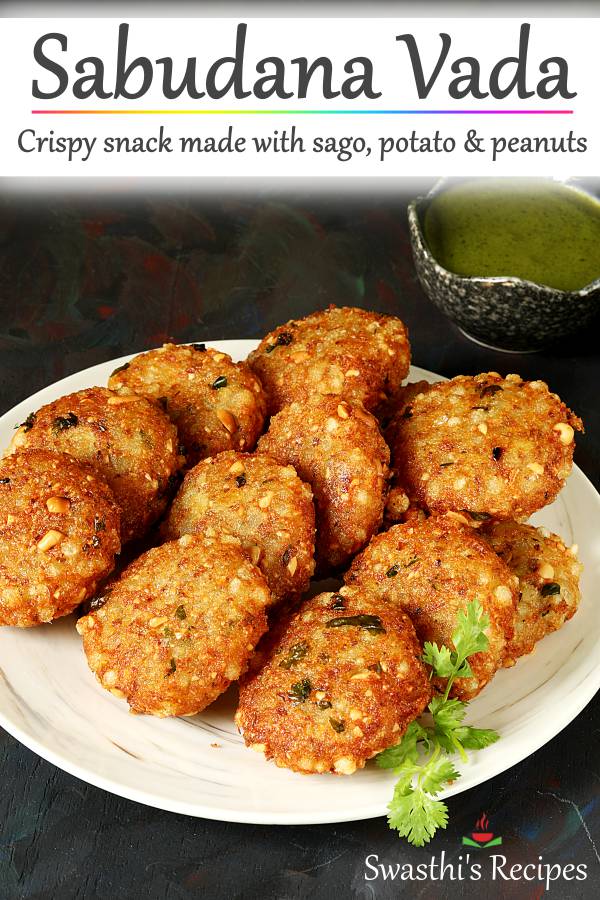