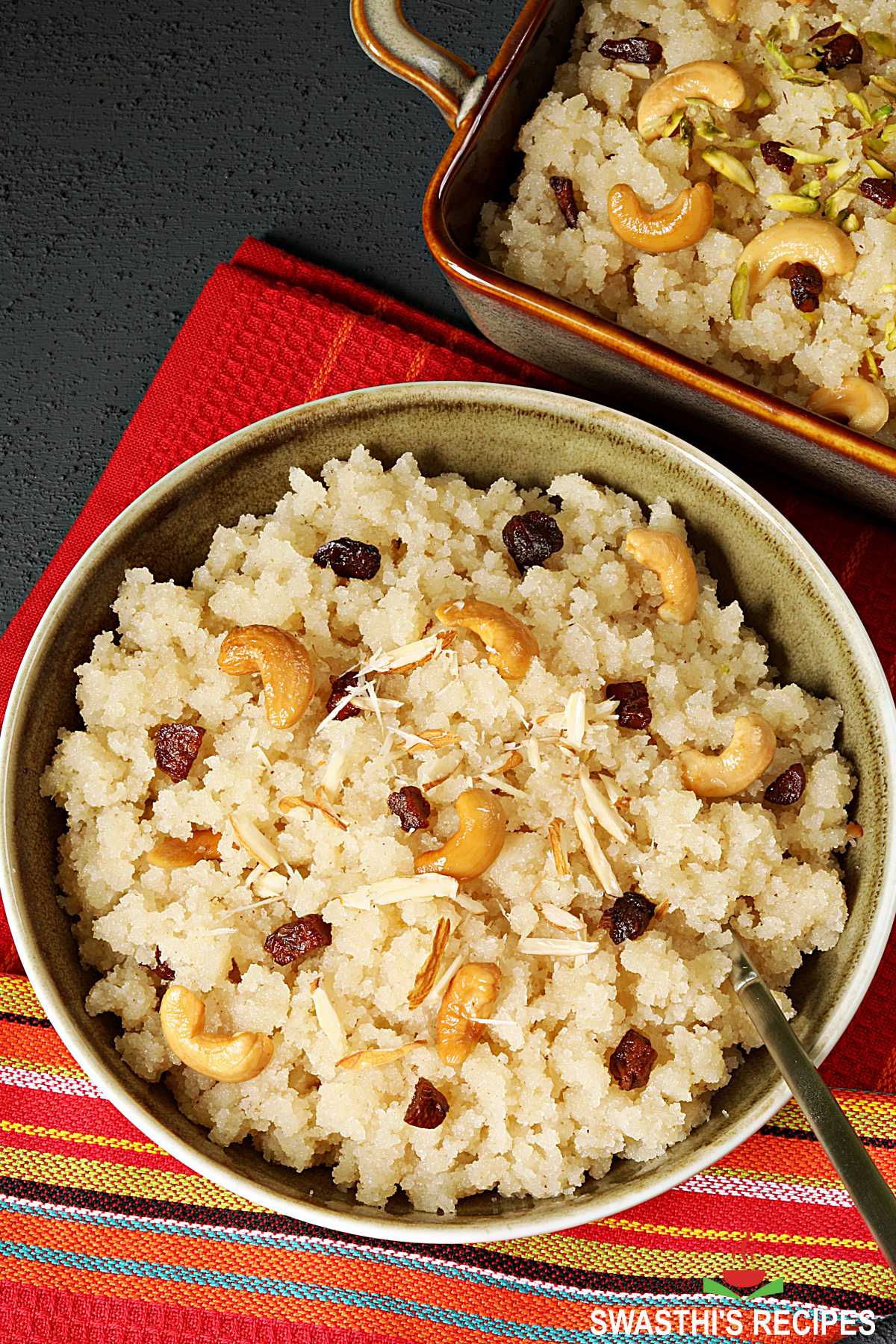 Sheera also known as suji halwa is a traditional Indian pudding made with semolina, ghee, sugar, cashews and raisins. This simple delicious dessert has a fluffy & soft texture with delicate flavors of cardamom & ghee. Suji halwa is made in many regions of India with more or less the same ingredients & similar method.

It is known as Sheera in Maharashtra, Karnataka and some parts of Andhra Pradesh. The same is known as Suji halwa in North India. South Indian rava kesari or kesari bath is a variation of this which is made much the same way but with an addition of kesari color.

Sheera is most commonly offered to the deities/Gods as Prasad or Naivedya during festivals like Ganesh Chaturthi, Varalakshmi Pooja & Navratri. Some people even prepare this for their special weekly Pooja. Sheera is also distributed in temples as Prasad.

Most people make this often at home as it is very quick to prepare. It is eaten for breakfast, snack or as a dessert in a meal.

At home we usually make this for Pooja and then it is shared with friends & family. Sheera or suji halwa is the richer version of rava kesari.

How to Make Sheera (Stepwise Photos)

1. Heat ghee in a kadai. I used half cup ghee. You can also reduce it to 6 tbsps if you prefer less ghee.

2. When the ghee melts, add 15 cashews (30 split) and fry until light golden. Add 15 raisins and fry all of them together until the raisins turn plump. I didn’t have raisins in stock so I used chopped apricots.

3. Remove them to a plate immediately.

4. Meanwhile pour two and half cups water to a pot and begin to heat.

6. On a medium flame fry the rava stirring constantly.

7. If you stop stirring even for a few seconds the rava can get burnt. So be cautious and fry until the rava turns golden in color. Some people like to deep roast it. If you like you can roast it further for 1 to 2 mins. But do this on a low flame.

8. Meanwhile the water should come to a rolling boil.

9. Just be careful as the water splashes. Pour the hot water to the hot rava pan & keep stirring continuously until the water is absorbed completely.

10. Suji absorbs water and turns thick. Make sure there are no lumps of rava.

12. You will see the rava is cooked to fluffy texture. Give a good stir and then add 1 cup sugar and ½ teaspoon cardamom powder.

13. Sheera turns gooey as the sugar dissolves. Continue stirring until the sheera leaves the sides of the pan.

14. Turn off and keep covered. Add the ghee fried dry fruits and nuts before serving.

When it cools down fluff up with a spatula or fork and transfer sheera to serving bowls.

Ratio: The ratio of rava:ghee:water is very important to get fluffy and non-sticky sheera. For every cup of rava or suji we use half cup of ghee and 2 ½ cups water. If the sooji is not very fine then we increase the water to 2 ¾ to 3 cups.

Rava or Suji: There are different kinds of semolina or suji available in the stores. To get fluffy and soft sheera use fine rava.

Roasting suji is the key step to make non sticky sheera. Roast the suji on a medium flame stirring continuously until it reaches a light golden color. If you like your halwa to have a deep golden color, you can roast it further for 1 to 2 mins. This deep roasting will bring a nutty aroma to the suji halwa.

Ghee: Using good quality ghee is very important as it completely elevates the flavor of sheera. Traditionally desi cow ghee was used especially if made for naivedya or prashad.

Half cup ghee to 1 cup rava is the ratio we use for festive occasions. You can reduce the ghee to 5 to 6 tbsps.

Water or Milk: Sheera can be made even with milk for a richer taste. You can also use half milk & half water.

Sweetener: Sugar is the most common sweetener used to make this. But some temples use jaggery along with edible camphor (pacha karpuram).

This recipe can be directly doubled or tripled. You need to be careful when making sheera in larger quantities as it can splatter a lot while pouring hot water. 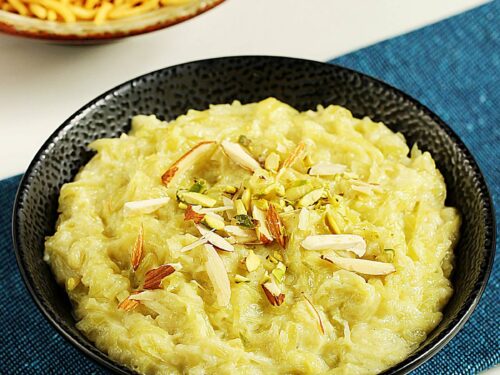 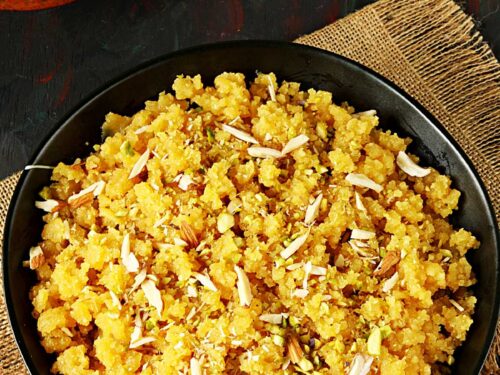 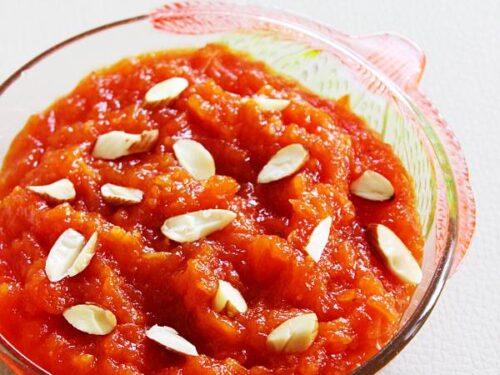 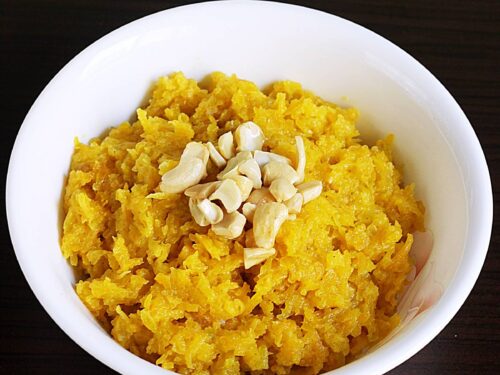 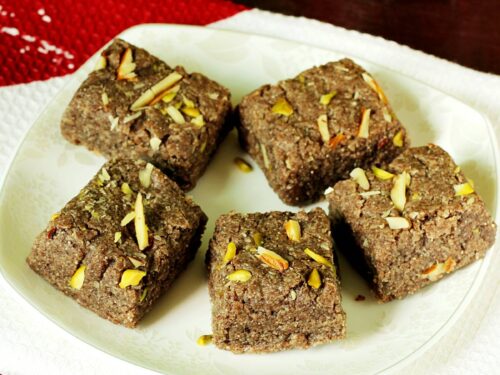 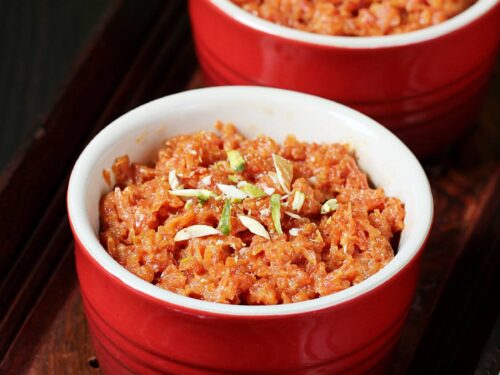 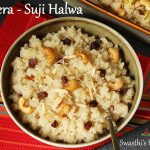 Suji Halwa is a delicious Indian pudding made with semolina, ghee, cardamoms and nuts. It is made for most festive occasions and goes well as an after meal dessert.
Pin Recipe Print Recipe
Prevent your screen from going dark

How to Make Sheera

Tried it everyone loved it

Tried it, everyone loved it

What kind of cookware are you using here? I don’t want to use non stick for india sweets, n was looking for alternative

In this post I have used a le creuset enameled cookware. You can make most of the Indian sweets in a heavy bottom stain steel cookware too.

Great recipe with detailed instructions. Thanks so much! (I did reduce the ghee and sugar and it was still quite tasty)

I’ve tried this recipe twice. Once with water and the 2nd time with a mix of milk and water. Both results were perfect. So easy and quick to make. One of my favorite sweets recipes. Thank you Swasthi

Hi Caroline
You are welcome! Glad to know it turned out good.
Thank you!

Thank you
Glad it turned out good

Simple and yummy recipe. I follow a lot of your recipes all of them turn out really delicious. Thank you.

Welcome Namrata
Glad to know. Thanks for following
🙂

Hi,
The halwa turned out fantastic, thank you.
I have a question… If I want to substitute jaggery for sugar, do I add the jaggery powder at the same time you have added the sugar? And do I use the same quantity too? I will be using the brown jaggery.

Hi Zenobia
Glad to know! Add the jaggery to hot water and dissolve it. Filter it and bring it to a boil. Rest is the same. Hope this helps

Thanks for the recipe
I usually add sugar in water and boil and then add it to roasted suji, does it make any difference?

Hi Kausar,
No difference both are same.

Thank you ma’am for sharing the recipe. I tried making the halwa as described and it turned out a little more sweet than expected. It might be because I have used jaggery as sweetener. But the ratio was same 1:1 for suji:jaggery. Will try with less sweetener next time. Overall the halwa was very nice.

Hi,
You are welcome. Glad it came out good. Yes you can try reducing a bit.
Thank you!

I tried Suji halwa.It really came out very well.The best part was that lesser ghee was used and halwa was tastier.Thanks

You are welcome Rekha,
Glad your suji halwa turned out good. Thank you!

Ma’am
I am following your recipes from very long. Wy you use more ghee in sheera and less in rava kesari. yesterday I see your all halwa recipes. You use more ghee only here. why ma’am Is there any difference?

Can you please tell the ratio for godhuma nooka sheera like they give in annavaram temple. Is it made the same way like sheera.

Hi Yamuna,
I do not know the recipe for godhuma nooka sheera. I think the ratio depends on the kind of nooka. I haven’t made any time.

Welcome Radhika,
Glad you liked it.

Hi Khushi
You are welcome. We don’t have an app. Thanks for your interest.
🙂