Paneer 65 fry recipe – Paneer 65 is a vegetarian appetizer made by crisp frying paneer and then tossing it in a spicy masala. There are a few different variations of this dish. I have roughly adapted this recipe from this popular Chicken 65 & Gobi 65. There are different 65 dishes available on the south Indian restaurant menus and this paneer 65 is one such from the vegetarian section.

65 dishes are quite popular in South Indian Cuisine and is also eaten as a side in a special meal.

This paneer 65 fry is moderately spicy, flavorful and tastes delicious. It goes well as a party snack too along with masala tea.

Paneer 65 is made by batter frying the paneer until crisp and then it is tossed in a spicy tempering masala.

Most times when paneer cubes are batter fried, they absorb lot of oil. So I just sprinkle flour, so that they don’t soak up much oil and get the right crust.

To keep it healthy I have shallow fried the paneer, you can also grill it in the oven and use.

Paneer 65 tastes different in each restaurant. Some use yogurt while frying and no tempering is done. Some add soya sauce to the tempering while some add tomato sauce etc.

This recipe uses yogurt to make the spicy masala & is a typical Hyderabadi style.

3. Toss for the paneer to get coated with the dry flour. Then sprinkle water little by little as needed to coat the paneer with flour.

4. Heat oil in a pan. When the oil turns hot, add the paneer cubes to the oil one after the other.

Do not disturb for minute then flip and fry till golden. Drain them on a kitchen tissue.

How to make paneer 65 fry recipe

5. Transfer the left over oil to a bowl and keep a tsp oil in the pan. Add cumin. When it sizzles, add garlic and fry for a while. Add curry leaves, onions and chilies.

6. When the onions are lightly fried, add 2 tbsp yogurt and chili powder.

7. Mix well and saute till the whey in yogurt evaporates.

8. Add fried paneer and saute in the pan on a high flame till the masala coats the paneer well. Switch off the stove.

Paneer 65 is ready to serve. 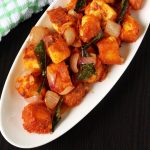 How to make paneer fry