Chilla recipe – Besan chilla are simple spiced gram flour pancakes from North Indian cuisine. These are super quick to make any time of the day as it needs minimal preparation. Besan chilla is mostly eaten for breakfast or a evening snack with some Indian tea. These are protein-packed, vegan and gluten-free.

Besan is a hindi word for gram flour and chilla is a pancake. In India, there are various kinds of savory pancakes made with different ingredients like oats, semolina,rice flour and wheat flour.

However besan chilla is much loved by many as these are flavorful and taste delicious. They are very simple to make without much effort even by beginners.

Sometimes I also make these for a quick dinner and serve them with a chutney as it add some nutrition and flavor to the meal.

2. Add 1 cup besan, salt as needed, half teaspoon ajwain and 1/8 teaspoon turmeric to a mixing bowl. Mix up all the ingredients.

4. Mix gently and make a batter of thick but pouring consistency.

5. Add more water if needed. I used little less than 1 cup. If the batter is too thick then the chilla will not cook properly and may cause stomach upset. (check the video for consistency)

How to make besan chilla

6. Heat a tawa or griddle. If not using non stick pan, then grease it well with few drops of oil. When it is hot enough, pour one ladle full of batter in the center.

7. Spread it as much as possible.

9. With in few minutes, you will see the edges begin to leave the pan.

10. Flip it and cook pressing down with a spatula for thorough cooking.

11. When you see brown spots on the cheela, you can remove it to a plate. If you like soft chillas, cover them immediately.

Serve besan chilla hot with masala tea or a chutney.

Gram flour goes rancid too quickly & taste bitter even when it is within the shelf life. So always taste test the flour (besan) before using.

Vegetable & greens: This time I have used onions,tomatoes and coriander leaves. But you can also use grated carrots, baby spinach and fine chopped bell peppers.

Spices: Carom seeds also known as ajwain is most commonly used here as it makes a great combo with besan. These seeds also aid in digestion and impart a good aroma to the chilla. Ginger and turmeric are the other spices used.

If making for toddlers, then do soak the flour for about an hour. This help to reduce the chances of stomach upset. Also ensure the chilla is cooked well for the same reason. 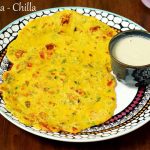 Chilla or Besan cheela is a simple pancake made with chickpea flour and some basic ingredients. These can be served with tea or a chutney.
Pin Recipe Print Recipe

How to make besan chilla 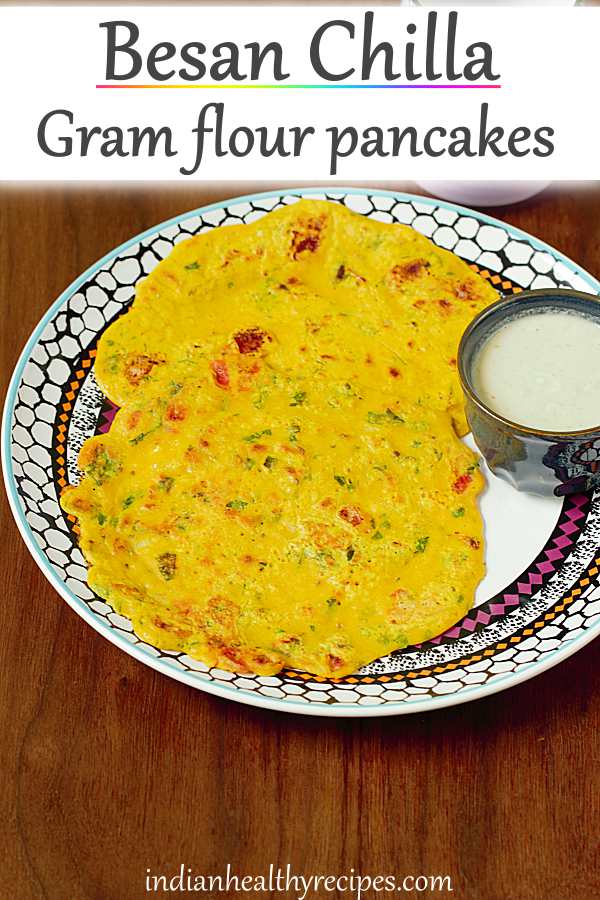 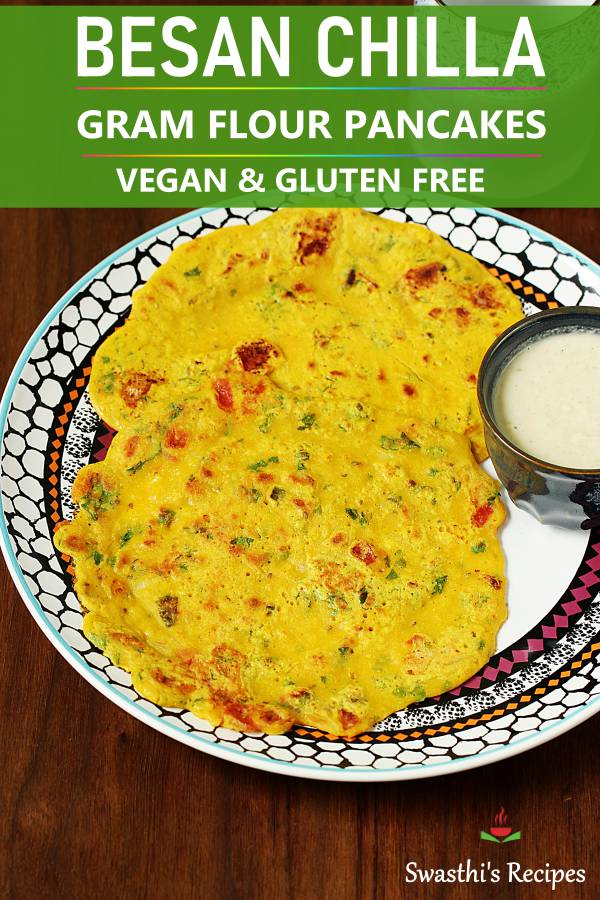