This recipe yields a perfect lightly spiced & aromatic veg biryani loaded with veggies. It only takes 30 minutes to prepare & makes a perfect meal for your hubby or kids lunch box.

This veg biryani can be made in a pot, traditional pressure cooker or even in a Instant pot. This recipe is one that’s made at home time and again for years. So I have the instructions for all the 3 methods.

If you have the time and patience to make a elaborate dum biriyani, then you may try this delicious Veg dum biryani. Usually a dum biryani takes more time to prepare and cook. So often I resort to this simple one pot veg biryani.

The difference between this one pot dish and a veg pulao is that there is no yogurt and spice powders used to make a pulao. But both are used in a biryani recipe.

I do make this veg biryani in pressure cooker & instant pot often since it doesn’t require much preparation. It is not time consuming and yet tastes good.

It is flavorful on its own and can be served without any side dishes. But if you prefer you can serve with a simple sherva/ shorba, bagara baingan, mirchi ka salan or raita. You can find a collection of raita recipes here.

You can also have lassi & papads in your vegetable biryani meal. 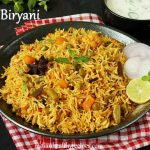 How to make veg biryani

How to make veg biryani

1. Wash rice until water runs clear. Soak it till you begin to cook.
2. Heat a pressure cooker with oil. Add spices – cinnamon, star anise, cardamom, cloves, mace, bay leaf and shahi jeera. Saute for one to two minutes until they begin to crackle. I also add little stone flower.

4. Next add ginger garlic paste. Saute this until the raw smell goes off.

5. Transfer the veggies. Saute on a medium to high flame for 2 to 3 minutes. I have used potato, peas, onions, carrots, cauliflower and french beans. You can also add soya chunks if you like.

To add soya chunks, soak them in hot water until soft. Squeeze up the water. Rinse a few times and squeeze them completely. Then add here.

7. Fry again for another 3 minutes on a slightly high flame until the tomatoes break down. The mixture turns aromatic.

9. Pour water to a separate bowl and add salt. Mix and taste the water. It has to be slightly salty. If needed add more. Pour the salted water around the edges of the pot. Level the rice. This method gives you layered veg biryani.
OR you can also just pour the water and mix everything and cook.

Optional : You can also add a tbsp of ghee, sprinkle some fried onions and then 1 pinch of saffron soaked in 2 tbsps milk.

10. Cover the pressure cooker. Cook on a medium high flame for one whistle. I manually release the pressure with the help of a wooden spoon after 1 to 2 mins.

11. Open the lid. Lastly fluff up the veg biryani with a fork gently and add lemon juice if desired. Do not stir it vigorously otherwise biryani will turn mushy. 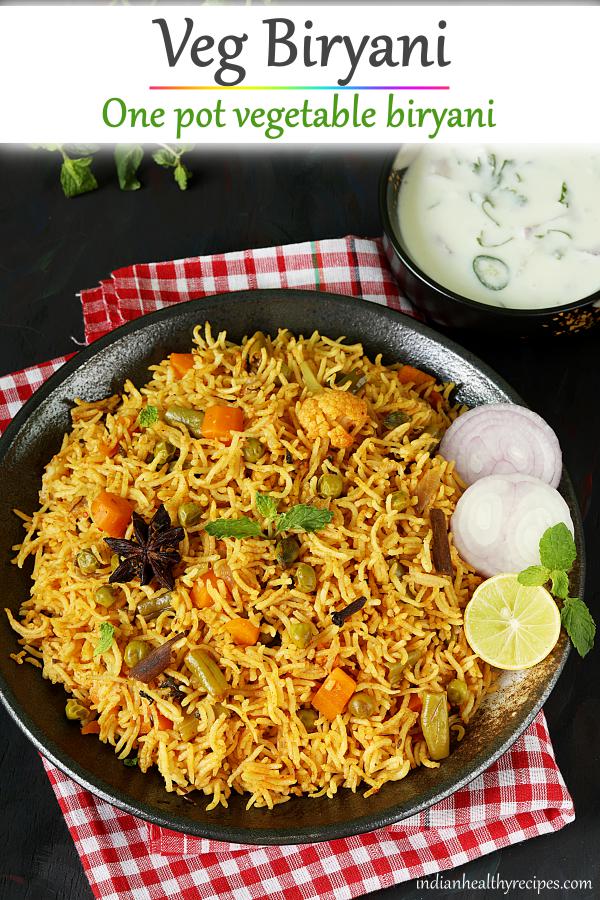 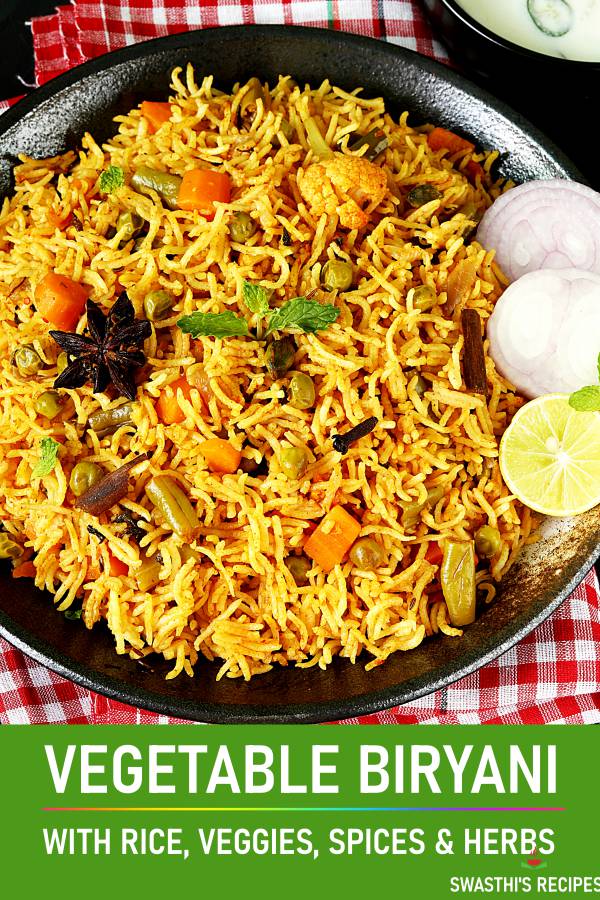